Up and out early again

Yeah.  Blogs on sidebar to the right.
Posted by Ragin' Dave at 05:45 No comments:
Email ThisBlogThis!Share to TwitterShare to FacebookShare to Pinterest
Labels: Blog Stuff

I'd include a whole lot more of the Olympic Peninsula, but yeah. 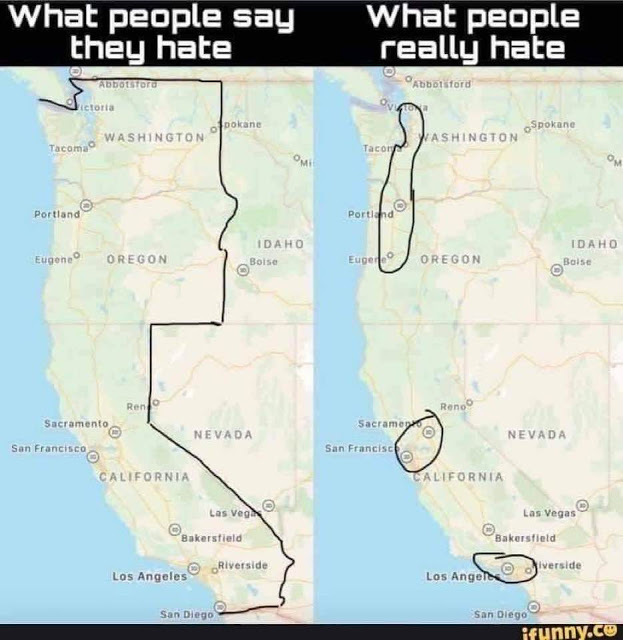 Lockdowns don't work, and they never did

This makes me want to do the Razorfist chair-spin with two middle fingers and the "Fuck you I was right!"

For more than a year, proponents and opponents of COVID-19 lockdowns have played tug of war over safety and freedom, with both camps declaring fealty to science despite opposite messages. Thanks to the ruling class who insisted shutting down would save lives, that became the conventional wisdom. Fauci, President Joe Biden, and their allies in the media called for nationwide lockdowns, with Biden condemning Trump for leaving the decision to states and Fauci saying this time last year, “I don’t understand why” a nationwide stay-at-home order isn’t happening.

As is so often the case, however, the conventional wisdom was wrong. A new study from Chicago University economist Casey Mulligan validates what the anti-lockdowners knew all along: Lockdowns are a bad idea. After workplaces implemented mitigation measures, they became far safer environments than people’s homes.

The destruction and devastation wrought by the fear mongers and the government never needed to happen.

We have lost our freedom and our sanity.  This country is fucked, with a drooling Chinese hand puppet installed in the Oval Office while anti-American marxists work from inside the government to destroy this country and turn it into a communist hellhole.  Businesses lost.  Economies destroyed.  Churches shut down.  We were telling families that they couldn't attend the funerals of their parents because of this bullshit.  And it never needed to happen.

Posted by Ragin' Dave at 05:30 1 comment:
Email ThisBlogThis!Share to TwitterShare to FacebookShare to Pinterest
Labels: Complete Incompetence, Get Down With The Sickness, Total Corruption

At least when Russia and China kick our asses, we can rest assured that we recruited the most woke, pan-sexual, gender non-binary otherkin we could recruit!

In all seriousness folks, this is garbage.  It's a flaming dumpster fire of a recruiting ad for the military.  The military's job is not to be inclusive, it's to kill people and break shit.  And all the pretty little bleach-blond girls who have two mommies don't actually do much of the killing people or breaking shit.  All you have to do is take a good hard look at who can pass the ACFT.

We can be woke, or we can win wars.  You cannot do both.  Drooling Joe the Chinese hand puppet and his handlers have decided to be woke.

Posted by Ragin' Dave at 07:59 No comments:
Email ThisBlogThis!Share to TwitterShare to FacebookShare to Pinterest
Labels: Military Life

Liz Cheney is booted from her leadership position

It should have happened after she voted for impeachment, but better late than never.

Cheney was undeterred by the vote, and vowed to oppose Trump going forward.

This clueless GOP establishment moron wouldn't shut her yap about Trump.  Ever.  She was afflicted with TDS.  She was worthless in her position, and she gave the DNC more and more ammo every day.  And now she's gone.

And one of the surest ways to know that booting Cheney from her position was the right thing to do is watch the reaction of people who hate you and want you to die.

The deed had been done by the time I wandered over to my computer to begin working for the day. I immediately did what I always do when I know that the Left is triggered: I checked Twitter, The New York Times, and The Washington Post to get an overview of the meltdown.

It was positively glorious.

Once Cheney loses her re-election bid, I look forward to seeing her at her new gig at CNN.

Posted by Ragin' Dave at 07:17 No comments:
Email ThisBlogThis!Share to TwitterShare to FacebookShare to Pinterest
Labels: About Damn Time, Politics

Maybe too little, too late

An open letter from Generals and Admirals.

But at least it's something.  I'll take it.  Of course, it'll get ignored by the Democrat Media Complex, because anything that hurts their masters in the DNC must be squashed.

Posted by Ragin' Dave at 06:47 No comments:
Email ThisBlogThis!Share to TwitterShare to FacebookShare to Pinterest
Labels: Military Life

Democrats own this.  It's all theirs.

Jimmy Hobbs, 75, a farmer on the US who’s property is on the US-Mexico border went out to round his property around 8:30 am and what he found horrified him.

While driving around his property he found five small girls abandoned after being discarded by the group they were with that illegally entered the county.

Three of the girls were from Honduras (7 and 2), the two other were from Guatemala and were aged 5 and 11 MONTHS!

Posted by Ragin' Dave at 05:17 No comments:
Email ThisBlogThis!Share to TwitterShare to FacebookShare to Pinterest
Labels: Democrats love illegal aliens but not Americans, Immigración

Taking their ball and going home

More than 100 Republicans, including some former elected officials, are preparing to release a letter this week threatening to form a third party if the Republican Party does not make certain changes, according to an organizer of the effort.

The statement is expected to take aim at former President Donald J. Trump’s stranglehold on Republicans, which signatories to the document have deemed unconscionable.

Go right on ahead there, kiddos.  Do it.  I mean it, go take your ball and play with all the "cool" kids down on K street.  Do it today.  Don't wait.  The sooner the Republican Party is done with your pathetic, sniveling asses, the better off this country will be.

Posted by Ragin' Dave at 05:02 2 comments:
Email ThisBlogThis!Share to TwitterShare to FacebookShare to Pinterest
Labels: The Stupid Party

Another up and out early kind of day

There's going to be quite a few of those this week.  Hell, this month.

Posted by Ragin' Dave at 04:52 No comments:
Email ThisBlogThis!Share to TwitterShare to FacebookShare to Pinterest
Labels: Personal crap

And this is where I tell the "experts" to piss off

But according to scientists like Dr. Andy Pekosz, a professor of microbiology at the Johns Hopkins Bloomberg School of Public Health, a year without much flu could lead to a year with a whole lot of flu.

“We’ve gone over a year without a significant portion of the population getting infected with flu and getting immunity because of that,” Pekosz said. “That could mean that the susceptible people in the population to flu are going to be increasing.”

When someone gets the flu, they usually develop some immunity to the virus. That’s why young children and babies are often the most susceptible to getting infected, because their immune system hasn’t seen the virus yet. But since there was such little influenza circulating this year, the number of people without any prior immunity could double.

I got ten bucks that says a huge chunk of the Kung Flu numbers are actually influenza cases that are diagnosed as the Chinkvirus for various different reasons.  Because our "experts" have been shown to be nothing but political lackeys and suck-ups who care more about enforcing their will on an unwilling population than actually following any kind of scientific method to determine the best course of action.

In other words, fuck the fucking fuckers.

Posted by Ragin' Dave at 07:36 No comments:
Email ThisBlogThis!Share to TwitterShare to FacebookShare to Pinterest
Labels: Get Down With The Sickness

It's not a homeless problem, it's an addiction problem.

This article about homeless encampments makes some valid points, but the massive cause of massive homelessness is DRUG ADDICTION, not bad luck.

Homelessness isn’t new to places like San Francisco, L.A., Seattle, Sacramento, and so on. I was in Portland 12 years ago for a comedy gig. The park in front of the club looked like a scene from Michael Jackson’s Thriller video. Today it looks like the Walking Dead.

Homeless camps are popping up all over the West Coast and bringing violence, drugs, weapons, and defecation with them. When I was a kid, camping meant fishing and catching toads, not getting shot and stepping in people poop.

A minority of the homeless are there because of mental illness.  And by "minority", I mean about 25%.  That's still a large number of people, but it's not the majority.

If we started treating these addicts instead of letting them walk around shitting in public, we wouldn't be seeing a massive surge in homelessness.  Treatment can be many things, but we first need to admit that these are addicts.  They're not going to stop until they're forced to stop, and many times even then they won't stop using.  Dealing with addicts also means accepting the fact that many of them are going to die from their addictions no matter how much you try to help them quit.

And finally, if this country starts to treat the addictions and not just pat them on the head and give them a tent and a port-o-john, realize that treatment can mean long-term incarceration, followed by years of therapy and anti-narcotics.  Which means yes, you're going to lock them up until they're sober, and then you're going to help them remain sober.  The money spent on that will still be cheaper than the billions of dollars per city being thrown down shithole after shithole (and of course into the pockets of the politically connected).

Until people face the facts that this is a drug addiction problem, the homeless will never go away.

Posted by Ragin' Dave at 07:15 No comments:
Email ThisBlogThis!Share to TwitterShare to FacebookShare to Pinterest
Labels: The Death of Civilization

You can't say that you did nazi that coming

Do you honestly think that it won't happen here?  With the government destroying every Amendment of the Constitution it can, just as fast as it can?  With states already prohibiting worship during the Covidiacy?

In a just world, every single one of those cops who arrested the pastor would spend the rest of their lives running in fear of a righteous fury from the CITIZENS of a free nation.  But we don't live in a just world, do we?