Go read this if you're under the age of forty.  Do it now.  Hell, read it if you're over forty just to appreciate how much you're going to get screwed.

Nowadays, the feds are borrowing something like 40 cents of every dollar they're spending. That bill is going to come due eventually and when it does, the people who spent it will be long dead. And so will the economy, suffering from a "debt hangover" that all the Advil in the world won't help. We're getting perilously close to the debt-to-GDP ratios that economists Carmen M. Reinhart, Vincent R. Reinhart, and Kenneth Rogoff say will significantly retard economic growth for an average of 23 years.

It should go without saying that it doesn't have to be this way. And don't buy into the idea that the way things are is just part of the circle of life. You're the mark here, the chump who's believing in Bernie Madoff even after the grift has been revealed. There's not going to be a bigger idiot to come along and keep the pyramid scheme alive. You can tell yourself that this is all part of living in a society, that's it for the common good, that there's simply no way a class of people with only 45 times the amount of household income as you do can get by without you sacrificing so much. But you're kidding yourself, kiddo.

I think the 60's, and the socialist hippy class that the 60's produced, is the time where the cancer of progressivism metastasized into it's lethal form.  And we're in the late stages now.

Posted by Ragin' Dave at 09:10 No comments:
Email ThisBlogThis!Share to TwitterShare to FacebookShare to Pinterest
Labels: Dirty Fucking Hippy Losers, Must Read

And another brick comes tumbling down

83% of doctors are looking at hanging it up rather than deal with Obamacare.  And while I doubt all of them will retire, a huge number will.

But remember, Obamacare gives everyone access to health insurance coverage, right?  I'm sure that you'll be SO HAPPY having health insurance even though you can't find a doctor to take care of you.
Posted by Ragin' Dave at 17:41 No comments:
Email ThisBlogThis!Share to TwitterShare to FacebookShare to Pinterest
Labels: Government Health Care will kill you

This sucks.
Posted by Ragin' Dave at 14:01 No comments:
Email ThisBlogThis!Share to TwitterShare to FacebookShare to Pinterest

Killing the Golden Goose yet again

And this is why politicians need to be regularly beaten with nail studded baseball bats.

On Friday, President Barack Obama is expected to sign into law a federal highway bill with a section that redefines tobacco manufacturers to include any business with a roll-your-own cigarette machine and taxes those products at the same rate as packaged smokes.


A FEDERAL HIGHWAY BILL.  That REDEFINES PRIVATE BUSINESS.  So that the government can get MORE TAXES.

Fuck them all.  We need more tar and feathers.  And I don't even smoke cigarettes, but this is just another example of why the government needs to be pruned back to the bare roots.

When someone cheers for Obamacare

If I'm paying for it, I will have a say in it.  And people ain't gonna like what I have to say, especially when I slap the cigarette out of their mouth.

Yeah.  I'm pissed.  So fuck 'em and feed 'em fish-heads.  If the people who voted for Obama were so weak, miserable and pathetic that they wanted nanny government to tell them what to do, I'm gonna give 'em what they want GOOD AND HARD.
Posted by Ragin' Dave at 08:44 No comments:
Email ThisBlogThis!Share to TwitterShare to FacebookShare to Pinterest
Labels: Fuck the Fucking Fuckers, Government Health Care will kill you

So while I was over at And Now It's All This, I was given a little wake-up call. 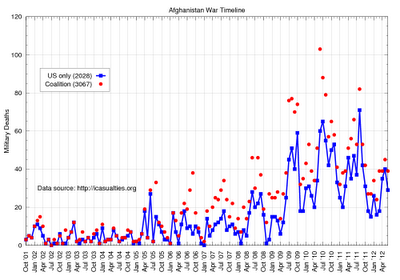 US military deaths passed the 2000 mark in June.

Stop and think about that.  We heard about American deaths every single day under President Bush.  But when the Marxist Messiah increases the death toll?  Nada.  Zip.  Zilch.  Zero.  The media doesn't want you to know about it.

LOOK AT THAT GRAPH.  Click to open it up in full size.  Look at the numbers starting in April 2009.  Up, up, up, up.  The average number of military personnel killed under the rules set by Obama as Commander in Chief have soared.  Not only did Obama surrender in Iraq, but his policies and rules have gotten more people killed faster than that evil warmonger Bush.

FOR THE LOVE OF GOD, IF YOU LOVE THIS COUNTRY AND IT'S MILITARY, GET OBAMA OUT OF OFFICE!

Posted by Ragin' Dave at 08:09 No comments:
Email ThisBlogThis!Share to TwitterShare to FacebookShare to Pinterest
Labels: Afghanistan, Anti-Military, Complete Incompetence, The Media is not your friend

He forgot the flag-waving

And the horn that blares out "Dixie Land".

Several commenters mistook my use of the microwave as the way all Americans heat water and clucked their tongues in disapproval. I’m happy to report to any of those who’ve returned to the site that I’m quite atypical in this regard. The standard American way to heat water is to take a pot of water out to our pickup truck, open the hood (what the Brits call a “spanner”), and lock the pot onto the engine block using a set of latches readily available at any Wal-Mart. Then we drive around at high speed, reciting the Gospels and firing our shotguns out the window. After reading the Gospel of John for three minutes and sixteen seconds, the water is ready. I hope this puts to rest any confusion.

!!!
Posted by Ragin' Dave at 07:59 No comments:
Email ThisBlogThis!Share to TwitterShare to FacebookShare to Pinterest
Labels: Linky Love

I do not believe that there can be a truly compelling public interest which morally requires the infringement on the rights of a single individual. I assert that the claim is risible and founded in an abysmal (dare I say, deliberate) misunderstanding of individual rights.

The day you have to infringe on my Rights in the name of your "Public Interest" is the day your public interest turns into tyranny.  And I have both a right and an obligation to resist your tyranny.
Posted by Ragin' Dave at 11:08 No comments:
Email ThisBlogThis!Share to TwitterShare to FacebookShare to Pinterest
Labels: QotD

The brisket came out good.  The chicken came out even better.  The Gin and Tonic came out perfect.
Posted by Ragin' Dave at 09:12 No comments:
Email ThisBlogThis!Share to TwitterShare to FacebookShare to Pinterest
Newer Posts Older Posts Home
Subscribe to: Posts (Atom)