Posted by Ragin' Dave at 00:30 No comments:
Email ThisBlogThis!Share to TwitterShare to FacebookShare to Pinterest
Labels: Just the plain Truth

I won't be posting much this weekend.  Got things to do and places to go.

Posted by Ragin' Dave at 07:21 No comments:
Email ThisBlogThis!Share to TwitterShare to FacebookShare to Pinterest
Labels: Personal crap

So anyways, this happened a few days ago

"This" being the ACFT, which was mandated years ago to be a gender-neutral test, being "diversified" so that girls can pass.

[A] female soldier between 17 and 21 years old now has to deadlift between 120 and 210 lbs. while a male soldier has to lift between 140 and 340 lbs. In that same age group, female soldiers have to run two miles between 23:22 and 15:29 minutes while male soldiers must perform that exercise between 22 and 13:22 minutes. That minimum run time for male soldiers is a minute longer than the previous version of the ACFT that the Army previously trialed, following data showing the run is by far the most failed event for both genders.

Leg tucks are totally eliminated as the event to measure core strength, with planks taking their place. … Test designers were concerned that the leg tuck doesn’t strictly measure core muscle strength but also requires that a soldier spend a lot of energy on upper-body and grip strength. …

“If I don’t have the grip strength, but have the core strength, I can’t do a leg tuck,” [Sergeant Major of the Army Michael Grinston] said. “That was the reason for taking that out; we wanted to measure core strength.”

Most females couldn't do the Leg Tuck.  THAT is why they're taking it out.  You know who else couldn't do the leg tuck?  A bunch of fat ass bastards who were too lazy to do PT.

I've taken the ACFT a couple of times.  The worst event for me was the Sprint/Drag/Carry.  But guess what you have to do in combat?  Motions just like sprinting, dragging a buddy out of fire, and carrying ammo cans.  The Leg Tuck did measure a bit of upper body strength, but you weren't even doing a pull-up.  You just had to bend your arms enough to touch your elbows to your legs as you curled your body.  And girls couldn't do ONE leg tuck.

But women should totally be in combat units.  Yeah.  Sure.  Uh huh.  Pull the other one, it's got bells on it.

So now we have a pussified PT test so that women can feel just as strong as men without having to actually meet the same standard.  Rawr.  Grrl power and shit.  Just don't ask a girl to actually do what a man has to do, because that's sexist or something.  But women should be in the infantry.

The ACFT was, in part, brought about BECAUSE women were allowed to join combat units, and the men in those units rightly pointed out that if you wanted to join their unit you should have to meet their standards.  And combat, ladies and gentlemen, is still a physical event, no matter what the pathetic fucktards in charge want to make-believe.  Not only to allowing lesser standards to prevail put people in danger, it also handicaps men who now have to face promotion boards against other Soldiers who DON'T HAVE TO FOLLOW THE SAME STANDARD THEY DO.

Do you trust someone who doesn't have to meet the same standard as everyone else?  I don't.  Not in combat.  If you can't get me ammo when I need ammo because you don't have the strength to haul the cans to my location, there's a problem.  If I have to push your ass over a wall because you don't have the strength to get yourself up and over?  That's a problem.

I've been chewing on this ever since the news was released last week.  And all I can say is that eventually, the US Army is going to go back into combat, and it will not be as capable as it needs to be.  And this is by design.  This is being done on purpose.

Oh, and the Army is having to reduce its numbers because they can't meet their recruiting goals.  Gosh, I wonder what could have made the recruiting numbers drop so much?  Like there's TOTALLY no way that a vaccine mandate on top of so-called leadership caring more about Tranny training than war training, following a disaster of a pull-out from Afghanistan, and at least three more years of this so-called leadership might cause people to re-think their decision to enlist.  And as woke military leadership force their woke political views on to the military, fewer and fewer patriots are going to join up.

Nobody enlists to be told that they're evil because their white, or that a man is a woman if he says he is.

Did I mention that I'm glad I'm retiring?

Posted by Ragin' Dave at 07:12 No comments:
Email ThisBlogThis!Share to TwitterShare to FacebookShare to Pinterest
Labels: Military Life 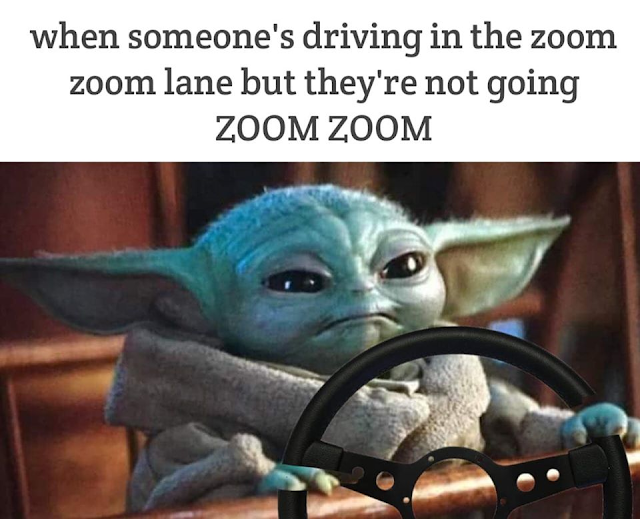 If you can see a line of cars passing you on the right, you need to get the fuck over.

Posted by Ragin' Dave at 07:48 No comments:
Email ThisBlogThis!Share to TwitterShare to FacebookShare to Pinterest
Labels: Random Crap

The Fucking Bastards of Ignominy just keep lighting themselves on fire

It seems that everybody has a copy of Hunter Biden's laptop.  Except the FBI.

“So where is it? The Laptop?” Rep. Matt Gaetz (R-Fla.) clown-slapped the assistant director of the FBI’s Cyber Division, Bryan A. Vorndran, on Tuesday when Vorndran admitted he didn’t have “any information” on the whereabouts of Hunter Biden’s “laptop from hell.”

I know I've said it before, but there's no single agency that has fallen further in terms of credibility and trust than the FBI.  The FBI is worse than Ft. Hood's "leadership".  The FBI is a retarded potato that is fucking itself in the ass while dousing itself in gasoline and lighting a match.

And it still has the power to kick in doors and haul people off to jail where they can sit for a year without being charged for anything, all in service to their DNC masters.  Think about that for a while.  Then maybe go buy more ammo.

Posted by Ragin' Dave at 07:56 2 comments:
Email ThisBlogThis!Share to TwitterShare to FacebookShare to Pinterest
Labels: Fuck the Fucking Fuckers

In case you were wondering just how casually and habitually the White House lies to Americans, here’s an illustrative example. On Monday, the Biden Collective made the mistake of allowing their basement gimp to hold a presser.

You can read the rest.  The problem is that every statement out of Biden's drooling lips is pre-written to push the Democrat Narrative, and the truth got left out long ago.  Every presser is nothing but a bullshit session.  And Drooling Joe's handlers are now to the point where every statement he's making is a lie.  Every statement for years has been nothing but lies.  His entire "presidency" is a lie because he didn't win.

And lies haven been stacked on top of lies for years, with the Democrat Media Complex covering up everything in order to push Drooling Joe to where he is now.  And eventually, everything starts to unravel because the lie you told today contradicts the lie you told yesterday, or you accidently let the truth slip for some reason.

But eventually, it will all start crumbling down.  There's no way to avoid the pain that's coming.  And there IS pain coming, lots of it.  I know that a lot of my fellow conservatives are going to try to help anyone they can, and I'm going to say something difficult but true.

You can't help everyone.  You will have to pick and choose who you help.  And quite frankly, when the bad times come, any Democrats who want help from me can kiss my ass.  They voted for this, they got what they voted for, and they can damn well live with the consequences of their actions.  I suggest you adopt the same attitude, because unless the Democrats feel some pain and understand the consequences of their actions, they'll never learn and they'll never grow up.  Which means the cycle just keeps happening, only getting worse each time.  Kind of like what's happening right now.

Posted by Ragin' Dave at 07:32 No comments:
Email ThisBlogThis!Share to TwitterShare to FacebookShare to Pinterest
Labels: Biden is a puppet, The Death of America

And he still can't manage to make it through without fucking something up.

Thanks to a photo snapped during Monday's event at the White House where President Biden made remarks on his budget for the next fiscal year, we have a better idea of how the White House prepares Biden for questions — preparation that again was all for naught as Biden failed to stick to his one-sentence talking point he clutched in his hand.

We don't have to defeat Drooling Joe the Chinese Hand Puppet, he does that himself.  It's the Cabal who committed fraud in 2020, got him installed in the Oval Office illegitimately, and are without a doubt planning something else for 2022 and 2024 that we need to worry about. 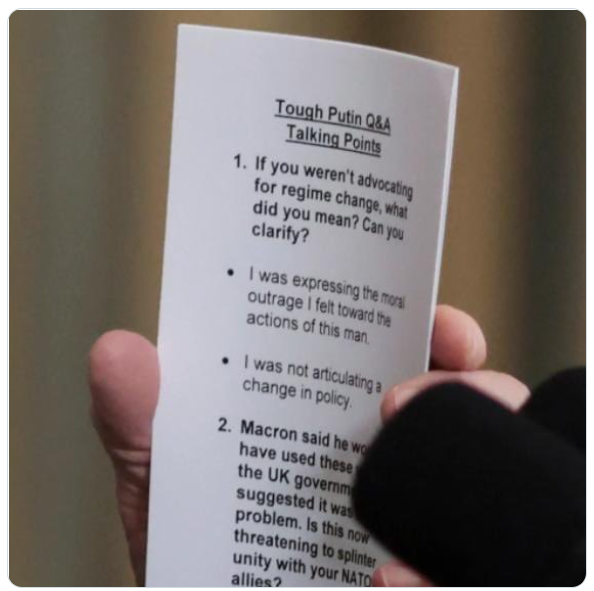 The question isn't about Drooling Joe, it's about his puppet masters.  What are they planning next?  Because Marxists do NOT just give up power.  And our Marxist oligarchy currently running the USA have committed so many crimes that if another insider makes it to the White House, they know they're screwed.  Hell, if Trump makes it back they know they're screwed.  The Deep State cannot let someone outside of the establishment win control.

So what are they working on this time?

Posted by Ragin' Dave at 07:42 No comments:
Email ThisBlogThis!Share to TwitterShare to FacebookShare to Pinterest
Labels: Biden is a puppet, Politics

OUT: There are no biolabs in Ukraine!

IN:  Hunter Biden secured funding for biolabs in Ukraine!

You want to know why the Democrats were so hell-bent on cheating old Drooling Joe into office?  Because if Trump was still there these criminal fucking pieces of anti-American shit might actually be getting investigated.

Hanging is too good for them.

Posted by Ragin' Dave at 07:33 No comments:
Email ThisBlogThis!Share to TwitterShare to FacebookShare to Pinterest
Labels: Killing is too good for them

We might have heard about this a long time ago.

Old Joe Biden’s chip off the old block, Hunter Biden, has been many things: board member of the Ukrainian natural gas company Burisma; vice chairman of the National Railroad Passenger Corporation; sought-after artist; and international bon vivant, but he has never been known to have served in the Department of Defense. So why does his infamous laptop contain, on top of everything else that is incriminating on it, Defense Department encryption keys that are not available to private citizens?

And let's not forget that the Fucking Bastards of Ignominy had Hunter Biden's laptop for at least a year before anyone else found out about it, and DID NOT DO A FUCKING THING.

Every person who claimed that the Hunter Biden laptop story was "Russian disinformation" should be put up against a wall and shot.  Our country would be better off for it.

Posted by Ragin' Dave at 21:33 No comments:
Email ThisBlogThis!Share to TwitterShare to FacebookShare to Pinterest
Labels: Fuck the Fucking Fuckers

So don't expect much from me today.  Or tomorrow.
Posted by Ragin' Dave at 00:30 No comments:
Email ThisBlogThis!Share to TwitterShare to FacebookShare to Pinterest
Labels: Personal crap
Newer Posts Older Posts Home
Subscribe to: Posts (Atom)