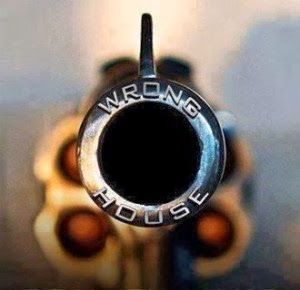 Kinda like the message scrawled on the turret shield just below a Ma-Deuce:  Free Photo.  Smile and wait for flash.

!!!!!
Posted by Ragin' Dave at 11:48 1 comment:
Email ThisBlogThis!Share to TwitterShare to FacebookShare to Pinterest
Labels: 2A, Linky Love

Nostrildamus is leaving Congress after 40 years of destroying America as hard as he possible could.  Henry Waxman is one of the biggest pieces of shit to ever foul the halls of Washington D.C., and he's going to go home and continue to live fat off of the American taxpayer, when he should spend the rest of his life covered in tar and feathers.

Fuck him sideways with a chainsaw.  I hope he dies gasping for breath in a government hospital while a doctor tells him "Sorry, Obamacare doesn't cover that."
Posted by Ragin' Dave at 23:44 1 comment:
Email ThisBlogThis!Share to TwitterShare to FacebookShare to Pinterest
Labels: anti-American, Domestic Enemies, Fuck the Fucking Fuckers

Doug M over at Knowledge is Power came up with the idea of the Bison Party.  SondraK has a bison as her current blog avatar.

Kinda makes sense when you think about it.  Big, powerful creatures who just want to be left alone and will absolutely fuck you up if you mess with them. 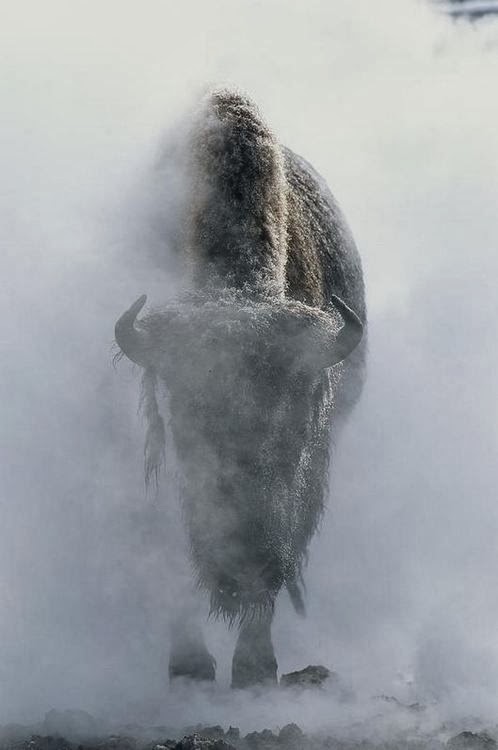 I'd like to see the Tea Party use this as their mascot...
Posted by Ragin' Dave at 17:22 8 comments:
Email ThisBlogThis!Share to TwitterShare to FacebookShare to Pinterest
Labels: Linky Love, Photo Time

24 hours away from Anarchy

MauserMedic, in the post below, comments that without power the people of Los Angeles would be fertilizer in two weeks.  I responded that it would be more like three days.  But after thinking about it, the time might be even less than that.

One of the officers I work with, who did a lot of strategic planning before this assignment, was on a group who's focus was extreme long-term planning.  One of the phrases that was beaten into people's heads was that the vast majority of Americans living in urban areas were 24 hours away from anarchy at any given moment.  And we're not talking the anti-government wishful thinking type of folks here.  We're talking all-out lawless riots, murder, theft, mob-rule anarchy.

Think about New Orleans after Hurricane Katrina.  Most folks didn't have the three days of supplies in their home to last until FEMA arrived, and they had plenty of time to get ready.  Why didn't they have it?  Well, a huge chunk of the population in New Orleans is the Free Shit Army.  They don't plan ahead.  They don't prepare.  They just sit with their hand out waiting for Uncle Sugar to shit another EBT card into their lap.  And thousands of people ended up in the SuperDome crying and screaming and carrying on as if the Zombie Apocalypse had occurred, when in reality civilization was coming to their aid every single day.

That big chunk of that population is present in every single major US city.  There isn't a single metro area in the USA that doesn't have a size-able portion of the Free Shit Army living in it.  Most of them have no idea what to do if the power goes out.  They've never had to prepare for a think in their lives.  They live on the government plantation, and like the slaves they are, they just wait for Master to come and give them their daily meals.

So the power goes out.  Water goes out.  Traffic does not move.  Nobody comes and gives them their free shit.  Got no TV.  Got no X-Box.  What happens now?

A lot of it will be contained just by the simple fact that the Free Shit Army can't maneuver very well outside of metro areas.  The Hillbilly side of the Free Shit Army tends to live in areas where they can be self-sufficient in terms of getting enough to eat and drink, so they'll just hunker down rather than look for trouble.  But the urban FSA?  If you're a person who has planned ahead, you MUST take the FSA into account, because they'll be coming for what you've got.

I live in LA county.  Don't think I haven't gone over this crap in my head time and time again.  How to secure the house.  How to get the hell out when that time comes; what routes to take, which guns to have in my wife's hands and in mine.  What food and water to take, and what gear.

In an emergency, there would be a large portion of the population here in LA that would be just fine, and there would be a bigger portion that would eat itself and everyone around it.  I don't plan on being eaten.
Posted by Ragin' Dave at 22:42 2 comments:
Email ThisBlogThis!Share to TwitterShare to FacebookShare to Pinterest
Labels: Musings and Meanderings

I really don't think there is any way for me to convey the cavalcade of stupidity that is the traffic in Los Angeles.  There are no words in the English language that can make you truly understand what it's like to drive on these roads.

Take 13 million people.  Now make them some of the dumbest bastards you've ever seen.  Now toss in greed, arrogance and narcissism.  These people are so self-absorbed that they have absolutely no idea of what goes on outside their car.

Now remove any ability to speak and comprehend the English language, traffic laws or rules of the road.

Add in various drugs and alcohol in about 15% of all drivers.

Add in illegal immigrants who are unlicensed, uninsured, and unable to actually drive in a modern vehicle on modern roads.

It is a daily struggle to not grab people, pull them out of their vehicles and beat them to death with a tire iron.  I have not seen such a clusterfuck of selfish, rude, arrogant, ignorant, ass-hatted fuckwits in my life.  My car's horn is about worn out.  I cannot describe one single event that sets me off, because every trip in the car is one never-ending stream of events that break every known rule of civilization, violates various traffic laws, and completely destroys plain, simple decency.

I cannot wait to leave this polluted, filthy shithole.  Los Angeles is a cancerous tumor on America's ass.

UPDATE:  I'd like to mention that all of the above fuckwittery happens on dry roads with clear, sunny skies.   It's not like a bunch of Southerners suddenly dealing with a blizzard.  These people are driving in perfect conditions, and they're still unable to drive a car without fucking up something!  I mean, it's like living around a bunch of idiots who can't walk and chew gum at the same time, and given the type of pedestrians I've seen they might not be able to do that!
Posted by Ragin' Dave at 20:22 3 comments:
Email ThisBlogThis!Share to TwitterShare to FacebookShare to Pinterest
Labels: Personal crap

I use www.mapmyrun.com to keep track of all my running.  It's kind of my self-motivation, looking back and seeing what I've accomplished.  One of the things that the website does is keep track of your totals and flash them on the screen.  So far, since I started keeping track (August 2009) I've run over 3,000 miles.

I've run across the USA.  That's a hell of a jog.
Posted by Ragin' Dave at 19:23 No comments:
Email ThisBlogThis!Share to TwitterShare to FacebookShare to Pinterest
Labels: Personal crap

Ragin' Dave's Quote of the Day, Naming the Evil edition

In sum, their philosophy consists of the single principle that no philosophy is valid. Their ethics consist of a single precept that making ethical judgments is ‘judgmental’ that is, ethically wrong. Their economic theory, socialism, consists of an arrogant denial that the laws of economics apply to economic phenomena. Their theory of psychology says that men do not have free will, because cause and effect is absolute; their theory of metaphysics is that subatomic particles do have free will, because cause and effect is statistical, approximate, uncertain, incomplete, and illusory. And on and on. All their thought is one self-refuting statement after another.

Philosophically, theologically and morally, the modern mindset is an end-state. Once a man has utterly rejected reason, he cannot reason himself to another conclusion. Once he has rejected morality, he has no sense of honor to compel him to live up to a philosophy more demanding than narrow selfishness.

If that doesn't sum up the Obamanation, I don't know what does.  And it certainly nails the type of people who fill my current cesspool living space of Los Angeles.

Read the whole thing, and Vox's commentary on it as well.  In order to defeat the enemy, you must know the enemy.

Another bloviating waste of time

I'm not listening to the State of the Union address.  I have no need or requirement to listen to that lying piece of crap lie even harder for hours on end.
Posted by Ragin' Dave at 18:27 No comments:
Email ThisBlogThis!Share to TwitterShare to FacebookShare to Pinterest
Labels: Obama

Damn, has it been that long?

My brother and I got into D&D when everything you needed came in a single box.  You would rub the numbers on the dice with crayons to get them to stand out, as they were stamped yellow plastic that you couldn't see otherwise.

Then Advanced D&D came out.  I had a first generation Monster's Manual.  Way back when computers had big floppy disks (ask your parents, kids!) my dad had a dot-matrix printer, and my brother and I were able to develop a printable character sheet on Dad's IBM computer, which made us rather popular with the other kids who role-played.  I played all the way up through high school, got into some other games, and then just kind of dropped them all when I graduated high school - between moving around, working my tail off and later joining the Army, I never had the time or the people to play.  But it was fun, and I don't regret all the nights I spent playing.

Forty.  Geesh.  It can't be that old.  I can't be that old!  Are we sure it's turning forty?
Posted by Ragin' Dave at 08:42 No comments:
Email ThisBlogThis!Share to TwitterShare to FacebookShare to Pinterest
Labels: Musings and Meanderings
Newer Posts Older Posts Home
Subscribe to: Posts (Atom)