I figure there will be a few more of these along the way.
Posted by Ragin' Dave at 19:53 No comments:
Email ThisBlogThis!Share to TwitterShare to FacebookShare to Pinterest

I said that progressives were pushing for younger and younger kids to have sex?

Look, I know that kiddy-diddling doesn't have a political flavor, supposedly.  But there's only one side who seems to not only try to make it acceptable to diddle kids, but who is trying to make it easier and legal to diddle kids.

So Stupid only a University Student would say it

Saw this on the old intertubes: 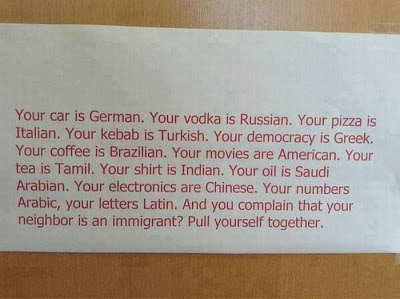 I'm sure that some dipshit thinks that he just came up with something witty.  But my immediate response was simple:

We asked for all those things to come here, and they call came here LEGALLY.  Then they assimilated themselves into American society.  Unlike the border-hopping criminals currently demanding citizenship simply because they could walk across the Rio Grande.

This is the kind of brainless idiocy currently running our country.  Blah.
Posted by Ragin' Dave at 18:04 1 comment:
Email ThisBlogThis!Share to TwitterShare to FacebookShare to Pinterest
Labels: Dirty Fucking Hippy Losers, Douchebag Says What?, Modern Life

And I tumbled back into bed sometime around 2330.  Slept somewhat, and now I get to take care of all the things I still need to do around the house.

Ain't being an adult fun?
Posted by Ragin' Dave at 12:04 No comments:
Email ThisBlogThis!Share to TwitterShare to FacebookShare to Pinterest

Things I've yelled at the radio in recent days

Especially when Lois Learner pleads the Fifth Amendment, and then claims "I've done nothing wrong"....


If you've done nothing wrong, then WHY THE FUCK DID YOU JUST PLEAD THE FIFTH AMENDMENT, YOU STUPID BINT?

You know what the worst part is?  The low-information voters, those dipshit fuckheads who keep electing that fucking nazi Obama, actually believe her.
Posted by Ragin' Dave at 17:26 2 comments:
Email ThisBlogThis!Share to TwitterShare to FacebookShare to Pinterest
Labels: Dirty Fucking Hippy Losers, Fuck the Fucking Fuckers

Dictators hate to stand out in the rain.


!!!!!
Posted by Ragin' Dave at 21:10 No comments:
Email ThisBlogThis!Share to TwitterShare to FacebookShare to Pinterest
Labels: Obama the Nazi, What a Douchebag

Work sucks.  There's not much more to say on that front.  I'm still busy, and I don't see that changing any time soon.

By the way, I love how the AP and other various assorted media outlets are all outraged over Obama's abuse of power when it's against them.  But let's face it - the MSM, aka the Obama Propaganda Machine, is the picture perfect definition of "Useful Idiots".  If they had half the brains they thought they had, they would have read a few history books and discovered that the Useful Idiots were some of the first people put up against a wall and shot by Uncle Joe once their usefulness was outlived.

In short, the commie fascists like Obama use the Useful Idiots, and then do away with them.  Welcome to the party, you fucking morons.  Your turn to get bent over and ass-fucked with a sandpaper condom.  Now you know how it feels to be a patriotic American who actually gives a shit about the Constitution.  I say "feels like" because I'm pretty sure that after this, you're going to go right back on your knees, slurping at your Communist Christ's soiled crotch, just like you have since 2007.
Posted by Ragin' Dave at 20:35 No comments:
Email ThisBlogThis!Share to TwitterShare to FacebookShare to Pinterest
Labels: Domestic Enemies, Fuck the Fucking Fuckers, The Media is not your friend

Pray for the people in Oklahoma

Especially those who don't know if their loved ones are alive or dead.
Posted by Ragin' Dave at 19:40 No comments:
Email ThisBlogThis!Share to TwitterShare to FacebookShare to Pinterest

The future of Amerika