Spent a lot of time out on the road, and it was good.  Maybe more posts later.

Posted by Ragin' Dave at 18:33 No comments:
Email ThisBlogThis!Share to TwitterShare to FacebookShare to Pinterest
Labels: Personal crap

And the drooling fuckwit installed in the Oval Office can barely read his presser off a teleprompter.

Biden’s affect was flat throughout the speech, except for a few moments when he read some tough-talk off the teleprompter. He stumbled badly in the first few minutes of the address to the nation, sounding more defeated and confused than resolute.

Joe Biden clearly doesn't know where he is or what he's doing.  But that doesn't excuse him or his handlers one iota for the mess they've made, and the lives lost.  It doesn't excuse handing over a list of names of Americans and their allies to the Taliban.

In a move no one can grasp, U.S. officials in Kabul gave the Taliban a list of names of American citizens, green card holders, and Afghan allies, believing the Taliban would allow them to enter the militant-controlled outer perimeter of the city’s airport. Lawmakers and military officials are outraged.

"US Officials".  Who deserve to be hung by the neck until dead.  I have no words, just incandescent rage.

Posted by Ragin' Dave at 07:06 No comments:
Email ThisBlogThis!Share to TwitterShare to FacebookShare to Pinterest
Labels: Complete Incompetence, The Death of America, Total Corruption 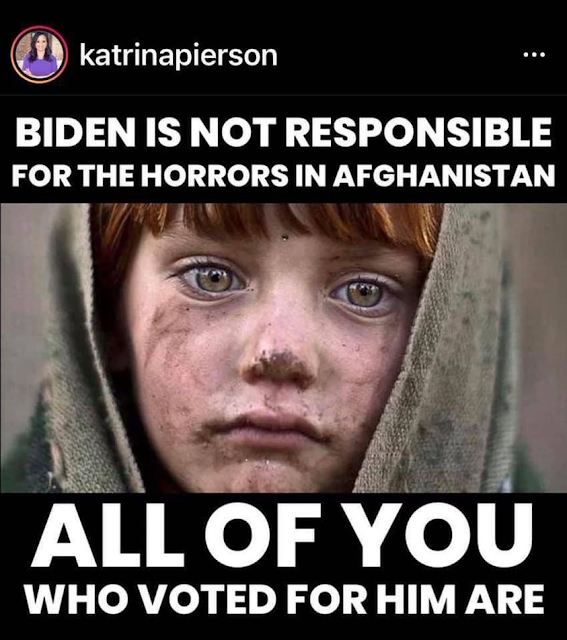 Posted by Ragin' Dave at 01:00 No comments:
Email ThisBlogThis!Share to TwitterShare to FacebookShare to Pinterest
Labels: Meme LIfe

By quitting or by firing, we need a clean house.

I think this is a pretty good summation:

The abysmal failure of America’s once-vaunted and widely respected military to even face the truth of its own incompetence heaps salt on the wounds of this epiphany. What country leaves thousands of its own citizens behind enemy lines to fend for themselves, with nothing more than an apathetic shrug of its shoulders? A country ruled by arrogant fools looking to line their own pocketbooks and who care little or nothing for the citizens that are their nation’s raison d’être, that’s who.

Of course, his solution is about as pie-in-the-sky as I can remember.  Yes, yes, we need to get out and be politically active.  Tell me, how did that work last time, as we re-elected Trump with MORE votes than he got in 2016, and the greedy, corrupt pieces of shit STILL defrauded this country and installed a demented, senile corrupt Chinese hand puppet?

Yeah.  Let's do that again, only harder?  Ain't gonna work.  We aren't voting our way out of this.

Posted by Ragin' Dave at 06:58 No comments:
Email ThisBlogThis!Share to TwitterShare to FacebookShare to Pinterest
Labels: The Death of America

Gonna repost this in its entirety, just in case fecesbook takes it down

It's from Larry Correia, after he dunked on one-note-pony George Takai:

A few people took issue with my tweet dunking on dumb ass George Takai wanting to take away "freedoms" for the "greater good", here is how I responded, but it deserves its own post, because this "Greater Good" stuff is pernicious evil (and also anybody who is shocked by my personal philosophy on this stuff obviously never read Spellbound) -
Oh, I am terribly sorry that my one sentence tweet dunking on a dumb ass celebrity didn't meet your rigorous academic standards comparing the entire history of government overreach in the name of the greater good to the history of disease mitigation. (complete with annotated bibliography)
However, you'd still be incorrect.

There is no false equivalence at all.
Takai is speaking of using coercion (whether government/societal, or in this case both) to take away freedoms, with the justification of "the greater good."
Now, you might personally think that this particular "greater good" is worth taking away freedoms. Don't matter. It's still equivalent. Let's try it out. The threat is Y. The freedom is X.
"A lot of people are angry about ( Y ). I don't care, because we need to do something about (X )for the greater good. The needs of society are more important.".
Now, go through and stick most of history's atrocities in there and see if they don't fit.
Germans were scared of Jews. Something had to be done for the greater good of society. Turks didn't like Armenians. Stalin really didn't like uppity Ukrainians. The Japanese are going to be saboteurs loyal to the empire. Somebody had better sterilize those natives. Hey, let's see how long it takes for black dudes to die of syphillis in the name of science! So on and so forth.
But this is DIFFERENT than those.
Why? Why is it different? Because you personally are scared of this X and think Y is worth it? Because guess what? All of those people said the same damn thing.
We see this bullshit every single day. We need to take away guns for the greater good. We need to take away free speech for the greater good. You need to have a social credit score for the greater good.
It's all authority pandering to fear to get more power. Every fucking time.
So spare me the false equivalence. It is extremely equivalent.
But this isn't as bad! It's just one little "common sense" thing! Then it'll go back to normal. Uh huh... And the Nazis didn't get elected and start gassing Jews a week later either. The Holocaust happened through a series of escalating events, each of which was a crisis (according to the authorities) which required slightly more action. 1935 was not the same as 1945. Duh.
So I'd rather not start down that path of declaring some groups of humans as untermensch who need to be managed by the state for the greater good, AT ALL.

And nobody will get fired

Despite how desperately they need to be...

Look, I get that everyone right now involved in the chaos in Afghanistan is trying to score some good PR right now, but the Defense Department just took some buckshot to the face over tweet patting themselves on the back during these evacuations at Kabul. Our friends at Twitchy wrote about it. There’s a picture of Afghan evacuees boarding a C-17. The tweet reads, “Afghan civilians board US Air Force C-17 Globemasters at Hamid Karzai International Airport in Kabul, Afghanistan.”   Yeah, there’s only one problem: It’s not our plane. It’s one from the United Arab Emirates.

Pardon me, I'm going to go vomit for a little while, and contemplate just what a pathetic fucking joke the USA has turned into.

If that plan goes ahead, though, CDR J.H. Furman warns the results could conceivably be catastrophic.

“The forced vaccination of all military personnel with the present COVID-19 vaccines may compromise U.S. national security due to the unknown extent of serious vaccine complications,”writes Furman. “Further study is needed before committing the Total Force to one irreversible experimental group. Initial reports leave more concern for the COVID-19 vaccinations than the virus itself for the (at present) exceptionally healthy military population.”

SecDef Lloyd Austin, who was a pathetic piece of shit while he was in uniform, is even worse a pathetic piece of shit out of uniform, and he's pushing his political bullshit (to include mandatory vax) regardless of the facts on the ground.  What are those facts?  The grand total number of US military personnel who have died from the Kung Flu are....  (drumroll, please!)  24.

Twenty.  Four.  Deaths.  Out of a population of 2.2 MILLION.  And since we're seeing breakthrough infections from the Delta variant, getting vaxxed ain't gonna do shit to really drop those already low numbers.

The military is not at a high risk from the Kung Flu.  But Lloyd Austin doesn't give a shit.  He's a political bitch, and this is a politically-motivated demand.

I can't wait to see what happens when all those young troops come up with all kind of weird health issues in five to ten years.  I'm certain that the same government who swore on a stack of bibles that Agent Orange was perfectly safe will treat these new casualties with the same respect and gratitude they treated the Viet Nam vets who were exposed.

Posted by Ragin' Dave at 06:52 No comments:
Email ThisBlogThis!Share to TwitterShare to FacebookShare to Pinterest
Labels: Get Down With The Sickness, Military Adventures

You gotta watch the entire thing.
Posted by Ragin' Dave at 06:45 No comments:
Email ThisBlogThis!Share to TwitterShare to FacebookShare to Pinterest
Labels: Must View

Well, OK, there's a shit-ton of reasons why they can't be trusted, but this one here is a biggie - they're anti-science, starting with their refusal to accept natural immunity.

They insist everyone should be vaccinated to participate in any aspect of indoor life, yet they pretend that those who have had the virus already pose just as much of a ‘threat’ as a random asymptomatic carrier. Anyone with half a brain knows they’re full of Schiff, which is why more and more thinking people are, thankfully, beginning to tune them out. Appearing on Fox News’ “Hannity” to discuss the topic a few weeks ago, Dr. Nicole Saphier called the CDC “myopic.”

The CDC stopped being useful decades ago, right about the time that they were swearing on a stack of bibles that Agent Orange couldn't possibly be the cause of those veteran's health issues, no sirree.  As an agency, I trust the CDC slightly less than I trust Drooling Joe to keep his hands to himself around small girls.  When an agency is telling people who have already had a virus that they need to get vaccinated against the virus, you are not dealing with good, honest brokers of information.  You're dealing with political hacks, pushing a narrative, and ignoring actual science and medical data.

Posted by Ragin' Dave at 06:47 2 comments:
Email ThisBlogThis!Share to TwitterShare to FacebookShare to Pinterest
Labels: Get Down With The Sickness

Much needed viewing for a Sunday.
Posted by Ragin' Dave at 10:18 No comments:
Email ThisBlogThis!Share to TwitterShare to FacebookShare to Pinterest
Labels: Must View

I probably shouldn't read stuff like this on a Sunday morning

It makes me feel rather un-Christian.

The adherents of this petty and narcissistic creed can claim power and wield it, but they cannot achieve the ends they seek. For example, radical medical school students can intimidate professors into denying the reality of biological sex, but this will only produce bad medicine; it will not alter the sexual dimorphism of the human species.

This dynamic extends across our government and elite institutions, as woke advances only deepen our decadence. In the end, the woke creed will fail, but it might bring our nation down with it.

Even as they lost Afghanistan to the Taliban, the Biden administration announced plans to revisit the contraceptive mandate. It seems that, whatever else happens, Democrats are determined to win the war on nuns who don’t want to pay for birth control.

My boss remarked that he was hearing relatively little screaming anymore from those who love this country.  I pointed out that a huge chunk of those people have given up on trying to argue for America, and are now preparing to shoot the bastards who've destroyed this country.  He didn't disagree.