Maybe not always, but dang, they sure make it close to 100%.

Attendees of the annual 4/20 pot celebration left behind almost 15,000 pounds of trash at the Golden Gate Park.


Meanwhile, the Tea Party, reviled as hateful bigots by the Left, always cleaned up after themselves and left parks cleaner than when they arrived.

Actions speak louder than words.
Posted by Ragin' Dave at 18:04 No comments:
Email ThisBlogThis!Share to TwitterShare to FacebookShare to Pinterest
Labels: Hypocrisy thy name is Democrat

I thought "Purple Rain" and "When the Doves Cry" were absolute crap.  But lots of his songs were a joy to listen to.  Plus, he helped produce more musicians than people know, and wrote songs for tons of other musicians.


Posted by Ragin' Dave at 18:02 No comments:
Email ThisBlogThis!Share to TwitterShare to FacebookShare to Pinterest

Potheads of the world rejoice!  Yeah, you can get high as fuck and talk about metaphysical crap and the smell of the color nine, and all that crap, and think you're really, like, DEEP and stuff...

But in reality, you look and sound like this:

Yes, I know there are medical marijuana users out there.  Got it.  Duly noted.  The 20 year old, dreadlocked, hemp-wearing pot smoker I lived next to in Seattle did NOT have glaucoma or any other medical issues that would have required the use of THC.  If you're in chronic pain, then I don't begrudge you any chemicals that can help you live a normal live.

But that's about 1% or less of the actual marijuana users in this country.  The rest of 'em?  Just wanna get high.

"But Dave, what's wrong with that, huh?!  Why do you care what they do to themselves?!"

Because I, and the rest of the bill payers in America, are the ones who have to pay to pick up the pieces.  Just like the three-pack-a-day smoker who drinks a fifth of Jack Daniels most likely doesn't have the money to pay for his open-heart surgery and liver transplant, the drug users of today are going to be the ones sucking up all the resources later in life.  And the people like me, who quit smoking, who work out to stay healthy, to make healthy choices so that we can be happy later in life, will be the ones who end up paying for it in one fashion or another.

Remove the cost from society, and I say that people can do whatever they wish.  But if I'm going to be forced to pay for it (and we're paying for it today, trust me) then I'm going to oppose any expansion that would force me to pay even more.

Besides, habitual use of marijuana lowers your intelligence.  Want proof?  I say we round up a bunch of Bernie Sanders voters, and a bunch of Ted Cruz voters.  Poll them:  Who smokes pot?

The Sanders voters are toking up daily, I'd bet you all the cash in my wallet.  Cruz voters?  Not so much.  Ta daaaa!  Point made!
Posted by Ragin' Dave at 05:22 5 comments:
Email ThisBlogThis!Share to TwitterShare to FacebookShare to Pinterest
Labels: Modern Life

Yes, I know that upstate New York isn't NYC.  Most of the upstate folks I've worked with couldn't stand NYC at all.  But let's be honest.  The political state of New York is a gigantic city that controls huge swaths of open territory.

So, to refresh the topic:  The city that overwhelmingly supports Barack Hussein Obama and Hillary Clinton also supports Donald Trump.

This will not help him in Indiana.
Posted by Ragin' Dave at 05:03 No comments:
Email ThisBlogThis!Share to TwitterShare to FacebookShare to Pinterest
Labels: Election 2016

Posted by Ragin' Dave at 19:39 No comments:
Email ThisBlogThis!Share to TwitterShare to FacebookShare to Pinterest
Labels: Must View

I'm feeling a round of "Kumbaya" coming on...

Trump fans, Cruz fans, and the Kasich fan, all coming together!

Posted by Ragin' Dave at 05:41 No comments:
Email ThisBlogThis!Share to TwitterShare to FacebookShare to Pinterest
Labels: Election 2016

Hey, why is my tally-whacker falling off?

If our civilization manages to survive the impending collapse due to mis-educated indoctrinated Leftist drones, then it'll collapse because people can't keep their pecker in their pants or their legs shut.
Posted by Ragin' Dave at 17:10 No comments:
Email ThisBlogThis!Share to TwitterShare to FacebookShare to Pinterest
Labels: Modern Life

And it's not only NOT being taught in universities, but it's being suppressed.

Otherwise, you wouldn't get this video:

Yeah.  That's the future of America.  Which will last all of five seconds after the Millennial Congress writes a law that says "You're American if you FEEL you are!"
Posted by Ragin' Dave at 17:07 1 comment:
Email ThisBlogThis!Share to TwitterShare to FacebookShare to Pinterest
Labels: Must View

I've been tearing into the property with abandon, and the Mrs. has been needing help putting her garden beds up.  So I'm a bit sore right now.  But we have four garden beds ready for planting.  The Mrs. has already seeded the ten different squash mounds and the strawberry bed that we're growing the Heirloom berries in.  On top of that, we have two beds of strawberries transplanted from a neighbor's house who didn't want them (long story on that), two new rose bushes to help close a gap in the vegetation (digging in this rock/clay mix they call dirt is NOT fun) and I spent a goodly portion of Saturday tromping around with a sprayer of Round-up Brush Killer hosing down anything that might even possibly hint at being poison ivy.

Yeah, apparently poison ivy loves Virginia, kinda like Ike loved Tina.  But not in my yard, you toxic little bitch!

So since we now have garden beds, and I've already stated that the rock and clay they call "dirt" around here sucks, which means we had to bring dirt in to fill it.  And since we don't have a tractor or other machinery, that means I got to shovel and move five cubic yards of dirt by hand.

Anyways, I didn't spend much time online this weekend.  And how we get ready for work!  YAY!
Posted by Ragin' Dave at 05:32 No comments:
Email ThisBlogThis!Share to TwitterShare to FacebookShare to Pinterest
Labels: Personal crap

It's every loony-bin Marxist trope rolled in to one seminar teaching "teachers" to indoctrinate your kids into failure.

"White Privilege" features prominently.  As does the "Patriarchal Christian Hegemony".  Go figure.  THIS IS WHAT THEY ARE TEACHING YOUR KIDS, PEOPLE!  If you're forced to keep your kids in the Marxist Indoctrination System that is the publik skoolz, are you at least working on un-indoctrinating them when they get home?

Gah.  No wonder this country is sinking like a stone.  The future has been poisoned for generations.  This is just the most obvious example so far. 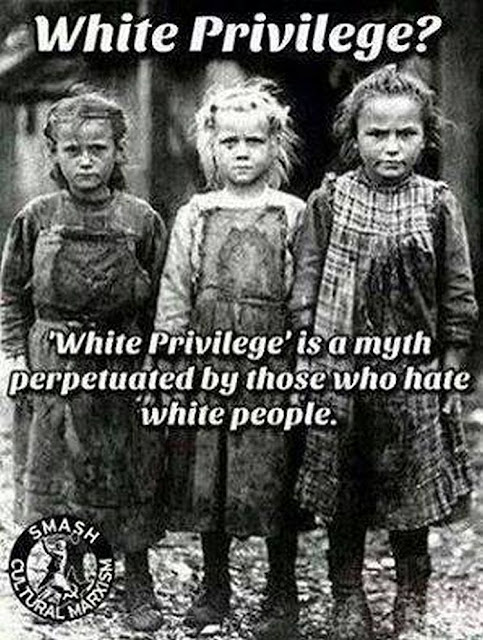