The Toad of Tor croaks again

So apparently there's another WorldCon coming up.  I haven't given a shit, because the crew in charge of said Con, who are also in charge of handing out Hugo awards, have proven that they only care about politics, and not about story-telling.  But Teresa Nielsen-Hayden, the Toad of Tor, cannot handle any dissent from her ideology whatsoever.  And so Teresa Nielsen-Hayden has gone out of her way to attack, defame, slander and de-platform one author who refuses to kiss her grotesque ring, Jon del Arroz.

I mentioned the other day how Tor employee and the EIC’s wife Teresa Neilsen Hayden started harassing me on Twitter by making a passive aggressive snide remark on my character and telling her following I’m not really a #1 Amazon Bestseller (I am). I naturally sent her a screen shot back to prove the fact, but it didn’t matter. This was the first time she had interacted with me ever, and it was an attack from her position at Tor with the obvious attempt of trolling an independent author:


As usual with this passive-agressive fascist, Teresa Nielsen-Hayden cannot control her impulses to shit everywhere she thinks she can.  Much as she and her eunuch of a husband have made the Hugo awards worthless (along with most of the SJWs under their control), under her stewardship Tor books has been flailing, hitching their ship to an anchor of a mid-rate author that might end up dragging them under.  And rather than focus on getting authors who can actually tell a good story to publish with Tor, Teresa Nielson-Hayden spends her time attacking an independently published author who's only crime was....  being a #1 selling writer.

Nothing scares these people more than a minority going off the reservation and speaking out against the inherent bigotry the SJWs have. They work so hard to hide it by relentlessly talking about how they’re “protecting” us and “helping marginalized” authors. When the truth is, their bigotry runs so deep that they almost always are patronizing us as if we are unable to handle ourselves.

It’s a big reason I’ve come under immense fire out the gate, and why it continues to escalate, even though I’m minding my own business and just producing at an incredible rate, and wildly succeeding in selling those products. Maybe that’s what’s got them running so scared.


Teresa Nielson-Hayden is a disgusting bigot, a mentally deficient troll, a grotesque mockery of a human being, as proven by her complete and total inability to conduct herself with anything resembling human decency.  Tor Books should be embarrassed for having any kind of a relationship with her, as she uses her position at Tor Books to launch her attacks.  And every time Teresa Nielson-Hayden opens her mouth and croaks out yet another attack towards people who just want to write books and live their lives, it confirms that the Sad Puppies were correct in their assessment of both the major publishing companies and WorldCon.
Posted by Ragin' Dave at 13:38 No comments:
Email ThisBlogThis!Share to TwitterShare to FacebookShare to Pinterest
Labels: Dirty Fucking Hippy Losers, Evil Does Exist, Modern Life

This is why Trump can attack the media, and see his poll numbers rise

Because the media, by and large, are a bunch of lying Democrat partisan hacks with no shame and even fewer morals.

The media reaction to both the redacted Foreign Intelligence Surveillance Act (FISA) wiretap applications and President Trump’s tweets was pure gaslighting. They claimed the FISA applications hurt the critics’ case. It wasn’t that they reported the news that critics of the FISA application felt vindicated while defenders of the wiretap applications also felt vindicated. They wrote as partisans in a war with those skeptical of FISA abuse.
(.....)
This is part of a pattern for the media when they encounter facts related to the surveillance of the Trump campaign. When Department of Justice officials leaked to the media that they had run at least one informant against the Trump campaign, a breathtaking admission by any sense of news judgment, the news was buried in the middle of the story and completely downplayed.

Others joined in with the gaslighting, spending weeks arguing — and I’m not joking here — that running a secret government informant against a campaign is not spying on a campaign.


She then goes on to list the facts as they are, and they are damning.  The Obama administration weaponized the government in order to help Clinton win the election, which explains why so many of them were shell-shocked when she lost.  They had literally broken the law in order to drag her sick, coughing corpse over the finish line, and they still failed.

And now the same media that was slavishly giving Obama's scrotum a tongue-bath every single day, and who worships the ground that Felonia von Pantsuit walks on, is out for blood.  And so they lie, lie, and lie again in their attacks against Trump.  Watching CNN is painful.  Sitting in airports last week made me want to take a baseball bat to every TV in the place.  I can only imagine the fever swamps of MSNBC right now.

So when Trump calls the media the Fake News, and a pack of liars, well...  the reason the public responds to that is because the media is a pack of liars peddling Fake News.  I think I saw John Nolte say it first:  We, the Normal Americans, have been waiting decades for a President to treat the press with the disrespect it deserves.  Oh, some NY newspaper is laying people off?  Fuck 'em.  Maybe if they weren't just another pack of lying, anti-Trump, anti-American jackoffs, they wouldn't be going out of business.  Now extrapolate that out to all the Fake News.  90% of the major newspapers in America could go out of business tomorrow, and I'd cry for the folks who sell paper, but I wouldn't shed one single tear for the "reporters" or "journalists" who get laid off.  And yeah, I put air quotes around those titles.  They're just Democrat activists with by-lines who found a way to get paid for their political activism.  But I ain't buying.
Posted by Ragin' Dave at 06:20 3 comments:
Email ThisBlogThis!Share to TwitterShare to FacebookShare to Pinterest
Labels: The Media is not your friend

Back up your words with actions, stop being a push-over, and look at what can happen!

President Trump announced Wednesday that he has secured major trade concessions from European Union officials as part of an effort to head off a trade war between the U.S. and the E.U.

After talks at the White House with E.U. officials, Trump announced in a joint Rose Garden appearance that the delegation had agreed to increase imports of soybeans and liquefied natural gas. Both sides agreed to work toward the goal of "zero" tariffs and subsidies on non-auto industrial goods, and to "resolve" recent tariffs that both sides have imposed.


This is what it looks like when you have an actual man in office, not a pathetic, spineless, anti-American bitch like the last jug-eared fuckstain.
Posted by Ragin' Dave at 07:20 No comments:
Email ThisBlogThis!Share to TwitterShare to FacebookShare to Pinterest
Labels: World Affairs

Diversity + Proximity = War.  You can't be neighbors with someone in your country who doesn't even speak the language of your country.

Some 13.5 percent of the U.S. population -- 44 million -- is foreign born, the highest level ever, and many are not proficient in English, choosing to speak Spanish at home instead.

A report from the Migration Policy Institute found that 22 percent of the U.S. population does not speak English at home.

They have to go back.  Immigrants who refuse to assimilate are no longer immigrants they are invaders.  If they don't want to become American, they have to leave.  Send them back home.

Posted by Ragin' Dave at 06:58 No comments:
Email ThisBlogThis!Share to TwitterShare to FacebookShare to Pinterest
Labels: Immigración

And the Toronto shooter's name is.... 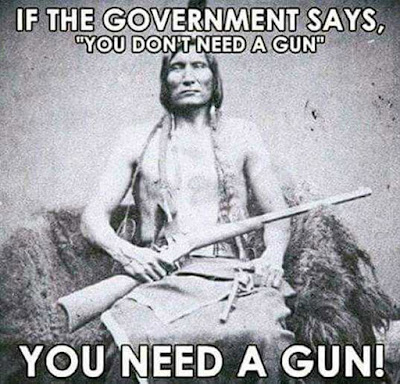 Apparently some people enjoy laying down and getting shit on, and demand that you begin to enjoy it as well.

We now live in a world of mob rule where one slight misstep from one political opinion to the other leads to disaster and destruction. The mob wants robots and automatons to perform service because anyone bothering to not go with one accepted flow or the other is going to see their livelihood torn down and burned at the stake or the guillotine. Make no mistake, mob rule has existed in this world since man decided to form communities and cities to congregate. It’s just gotten worse.

The most recent example of people run amok with their tiki torches alit with self-righteous rage is the one involving former Guardians of the Galaxy Vol. 3 director James Gunn. Multiple uncouth and offensive tweets from 2008 to 2010 (when he was a Hollywood nobody) were uncovered by some pharisaic gadfly. The mob pounced, and Gunn’s career is more than likely toast. His crime? Daring to speak out rather vociferously against both the current president and calling for the firing of Roseanne Barr.


His crime was speaking out rather vociferously?  Huh.  I thought his crime was making jokes about sexually abusing small children.  More to the point, conservatives have been getting fired over un-PC language for years now, and only recently have we begun fighting back by....  forcing the Left to live the the very same rules they impose on us.

This didn't come out of nowhere.  This wasn't spawned by some void.  This is a reaction to the multiple attacks by the Left against anyone who holds a contrary view to the proggie Marxists.  And cuck-boy here is all upset over the Left being held to their standards?

I'm willing to bet he voted for Evan McMuffin, or whatever the hell that turd's name was who got on three states' ballots.

This isn't some theoretical argument.  People on the right are tired of watching these supposed intellectual idiots lose the culture war every single day of the week.  You want to know what getting James Gunn fired did?  It pushed the Left back.  It told them "No, you may not in fact joke around about fucking little pre-pubescent boys."  It told the Left "If these are the standards you want to enforce, then enjoy them yourselves."

"Oh but Dave, an eye for an eye only makes everyone blind!"  I may even concede that argument.  But you know what?  I'd rather everybody be blind than have me blinded alone while my enemy keeps both his eyes, slits my son's throat and rapes my wife to death.
Posted by Ragin' Dave at 12:27 No comments:
Email ThisBlogThis!Share to TwitterShare to FacebookShare to Pinterest
Labels: Cucking Cucks, Fuck the Fucking Fuckers

Is there anyone in Hollywood who isn't a pervert, rapist or pedo?

Looking like the answer to that is "No".  James Gunn was fired over the weekend, and some douche-canoe named Michael Ian Black had tweets of his float up where he joked about buggering little girls.  Oswald Patton (Patton Oswald?  I don't know, whoever that fat, unfunny asshole is) had a tweet where he proclaimed (I'm hoping ironically, but I'm guessing not) that he was a proud pedophile.

Seems like everybody in Hollywood is buggering little kids.

I have a rant brewing.  It might come out later.  But I gotta shower and jet.
Posted by Ragin' Dave at 07:35 No comments:
Email ThisBlogThis!Share to TwitterShare to FacebookShare to Pinterest
Labels: Evil Does Exist
Newer Posts Older Posts Home
Subscribe to: Posts (Atom)