Better than a hotel

We've rented a house instead of getting a hotel.  The price is actually less than we'd pay for a hotel, we all have separate rooms, and it's a HELL of a lot more comfortable.

And I think this house was built before Idaho even became a state.  Beautiful.
Posted by Ragin' Dave at 11:25 1 comment:
Email ThisBlogThis!Share to TwitterShare to FacebookShare to Pinterest
Labels: Personal crap

If this were in color

It would be pornography.  You think I'm kidding?  Take a look at that body scan.  You can see the nipples and aureolas clearly defined.  You can see the area of her pubic hair.  Just because it's a "scan" doesn't mean it's right.

And here's my bigger problem with it - it still won't stop the people who are determined to blow up planes or harm Americans.  Because it can't see inside the body.  Hell, as my dear wife pointed out, you can't even see if she's wearing a bra or not.  How much effort does it take to put whatever explosives you want into a bra, or into a vial that's inserted into the rectum or *ahem* other bodily orifices?

Desperate people will be infinitely creative.  And as long as you focus on objects rather than on the people themselves, someone will find a way to beat your system.

By the way, who else want's their body scan to be kept on file by the feds?  Because they're doing just that.  The link is at the Geek's place.  Enjoy!
Posted by Ragin' Dave at 05:04 2 comments:
Email ThisBlogThis!Share to TwitterShare to FacebookShare to Pinterest
Labels: Nucking Futs

Yeah, you might get some pictures out of me.  Maybe.
Posted by Ragin' Dave at 04:41 No comments:
Email ThisBlogThis!Share to TwitterShare to FacebookShare to Pinterest
Labels: Personal crap

It's another short morning for me.  So you get another photo. 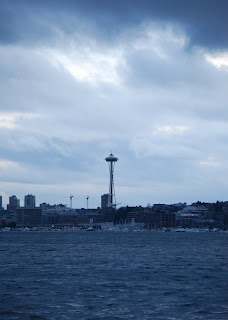 I shot this from the back deck of Ivar's Salmon House on Lake Union last year.  The sun was going down, and everything had a blue wash to it.  It's one of my favorite pictures of Seattle.  It's 2.7 MB if you want to download it.
Posted by Ragin' Dave at 05:00 No comments:
Email ThisBlogThis!Share to TwitterShare to FacebookShare to Pinterest
Labels: Photo Time
Newer Posts Older Posts Home
Subscribe to: Posts (Atom)