For those folks out there who aren't familiar with the traditional Latin Catholic Mass, the parts of the mass that are typically sung (Kyrie, Gloria, Sanctus and Benidictus, Angus Dei) have different music for different events.

For those who don't feel like looking up the translations of those parts, they are:

Keep in mind that church songs are simply prayers put to music.  The parts of the Traditional Mass have been sung and re-sung for centuries; it only makes sense that at some point, some priest or monk would say "Hey, why don't we change it up a little bit?"  The Missa de Angelis is the typical mass that most people learn, and I've been able to find it just about everywhere.  The Orbis Factor mass is supposed to be sung during normal times in the liturgical calendar, when there isn't a specific season that we're celebrating.  It's one of the oldest masses the Church as sung, and it sounds like it - very Byzantine.  And Cum Jubilo is used for masses honoring the Blessed Virgin.  This is what I'm practicing right now

It's a bear to learn, and I've got to have it down pat by February 2nd.  Yay me.  Here's just the Kyrie:

I suppose if I'd been able to focus on this, it wouldn't be such a big deal, but this week has been a kick in the balls.  Grrrrrr.....

Ah well, off to learn some more music.
Posted by Ragin' Dave at 07:56 No comments:
Email ThisBlogThis!Share to TwitterShare to FacebookShare to Pinterest
Labels: Real Music, Religion

Yesterday was a bad, bad day

Bad enough that the Ragin' Mrs put a chilled glass of scotch into my hand the moment I stepped in the door, and didn't let it run dry until I poured myself into bed.

That woman is a keeper, I tell ya.  Thank God I've already married her, otherwise I'd have to kill all the men around me to ensure they didn't steal her away.
Posted by Ragin' Dave at 19:56 No comments:
Email ThisBlogThis!Share to TwitterShare to FacebookShare to Pinterest
Labels: Personal crap

Oh yes, we wants it, the preciousssssssss! 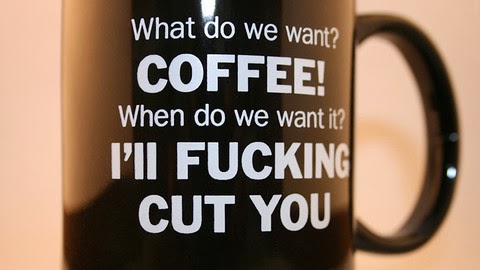 I'm going to have to buy this mug and take it to my office.

Fuck you, fuck your whore of a mother, and fuck the father you never knew because he didn't pay for the first time.

Fuck the horse you rode in on, fuck the goat that spawned it, and fuck the mountain they grazed on.

From this day forth, the State of New York shall ever be known as the state that only allow people who think that killing babies for the sexual convenience of the mother is sacrosanct.

From this day forth, the State of New York shall ever be known as the state who only allows people who hate the Constitution of the US, and the 2nd Amendment contained therein, to reside inside it's borders.

From this day forth, the State of New York shall be known as hostile to all Christians who actually know and understand their faith.

I will never do business in New York.  I will not purchase anything from a company in New York, and I'm not ever going to visit that festering cesspool of a city for as long as I live.

In conclusion, die screaming, and go to hell.

Got a case plus of mead bottled tonight.  Came out damn good, albeit a bit light in the alcohol (10%).  Great flavor.  The Ragin' Mrs. approves whole-heartedly.  Now I have to try to find that variety of honey again.  Maybe in the summer, when it's in season.

I've had this song in my head for the past two days.  You're welcome!

It's got enough of a Celtic lilt to it that I keep humming it around the house.

All those people wetting their diapers about Richard Sherman and his ten-second rant after he made the decisive play in the NFC Championship?

The guy was so hopped up on adrenaline that I doubt he could have given a calm interview if you paid him a million bucks.  On top of that, he'd just made a mad play against a player who had been yapping at him all night, and had gotten in his face at a charity event previously. If I had been in his shoes, you would have had to bleep out about half of the words coming out of my mouth.

As for his claim to be the best cornerback in the NFL?  Well, let's see here....  exactly how many times did the Niners throw at his side that game?  Kapernick knows just how damn good Richard Sherman is, which is why he never challenged him until that last throw, and how did that work out?  Mmmm-KAY then!

I'm not going to be arrogant enough to claim that the Seahawks are going to win the Superbowl; Denver and Payton Manning are damn good, and they've got a lot of weapons.  Still, it's the #1 offense going against the #1 defense.  This is going to be a hell of a game.  And I don't know if Denver can shut down Seattle's run game.  The Niners had a much better run defense than Denver has, and Lynch eventually wore them down and got some big runs against them.

And don't be fooled by Russel Wilson's low passing yards - if Wilson had the kind of weapons that Payton Manning has, he'd be putting up 500 yards a game.  As it is, he's got decent receivers, and he's finding ways to get the ball in their hands.  That TD catch by Kearse, when he had a defender draped on him like a cheap suit?  Golden Tate's catches and kick returns?  They might not be All-Pro, but they don't need to be.  They just have to win games.  And the last time I checked, that's what they've been doing.
Posted by Ragin' Dave at 22:04 2 comments:
Email ThisBlogThis!Share to TwitterShare to FacebookShare to Pinterest
Labels: Musings and Meanderings

And so much of it has been proven to be skewed in order to advance the Leftist religion of Global Warming.

Yes, it's a religion.  Yes, it's based on total and complete bullshit.

There's nothing I can really excerpt.  You have to go look for yourself to see just how badly the actual true data has been jimmied in order to make the Church of Global Warming seem plausible.

!!!!!
Posted by Ragin' Dave at 11:45 No comments:
Email ThisBlogThis!Share to TwitterShare to FacebookShare to Pinterest
Labels: Global Warming Hoax

My wife still giggles at me some times for being old fashioned.  I carry the groceries from the car.  I open the car door for her.  I open the house door.  I try to be chivalrous.  It's the way I was brought up, and the way I think all men should be brought up.  But I don't think I've ever seen a concept such as Chivalry put into words quite like this:

I said that chivalry — unlike the anti-chivalry movement — had a point. This is it. Chivalry calls for the strongest to serve and honor the weakest, realizing that the other option is for the strongest to dominate and abuse the weakest. Chivalry is one of the things that separates us from gorillas and wolves and rats. We, as chivalrous men, are called to use our strength in service to women, children, the infirm, and the elderly.

In the mean time, as a routine matter, chivalry is still essential. Men should carry bags, and hold doors, and pull out chairs, and offer seats to women, not because women are incapable of standing or opening their own doors, but because of what these acts represent — what they say. And what they say is simple: “I am bigger and stronger than you, but I will use my strength to honor you and protect you. I will not hurt you. I will not take advantage of you. I will humble myself before you and serve you.”


(Emphasis in the original)

This guy gets it.  There comes a point in a man's life where he has the power and the ability to abuse just about anyone and everyone around him if he so chose to do so.  The whole point of Chivalry is to raise a man up from being just another animal, and make him a real Man.  Take away that code, take away that way of thinking, and you're just an ape hitting another ape with a stick, no matter what form that stick takes.
Posted by Ragin' Dave at 22:28 No comments:
Email ThisBlogThis!Share to TwitterShare to FacebookShare to Pinterest
Labels: Linky Love, Musings and Meanderings

I've been rooting for this team since 1984.  Success has been few and far between until lately.  I'm going to enjoy the hell out of this.

And the fact that we beat the Niners?  Oh, that's just the icing on the cake.  There are a lot of good teams we could lose to, and while I would be disappointed, I wouldn't be upset.  Losing to the Niners makes me upset.  Beating the Niners makes my smile.  I'm happy as hell to send those bastards home.  Buh bye, boys!
Posted by Ragin' Dave at 21:15 No comments:
Email ThisBlogThis!Share to TwitterShare to FacebookShare to Pinterest
Labels: Personal crap
Newer Posts Older Posts Home
Subscribe to: Posts (Atom)