The F-35 needs to be scrapped

Bring back production of the F-22 in the meantime while you go back to the drawing board.

In spite of its advanced technology and cutting-edge capabilities, the latest stealth fighter suffers from structural flaws and slew of challenges.

Most recent among them is a structural engine flaw and shortage in its production.

The F-35’s engine problem is partly based in not being able to deliver them for maintenance as fast as needed, in addition to a problem with the heat coating on its rotor blades which shortens engine lifespan considerably.

Defense News described it as a “serious readiness problem”, suggesting that as soon as 2022, nearly 5 to 6 per ent of the F-35 fleet could be effectively grounded as it waits for engine replacements.

To fix this, the US Department of Defense is asking three American universities to help figure it out.

The fighter jet also suffers from a slightly embarrassing touchscreen problem. After making the switch from hard flipped switches to touch screens, pilots report that unlike a physical switch that you’re confident has been activated, touch screens in the plane don’t work 20 percent of the time says one F-35 pilot.

One of my acquaintances happens to work on F-35s, and he was recently deployed to the ME with his squad.  To say the planes had issues would be an understatement.  The plane is a money suck that doesn't work.  It needs to be scrapped.

Jeff Bezos is a worthless sack of walking garbage

And might I suggest not giving Amazon so much damn money?

Amazon has shown its true colors, once again, when it comes to celebrating and appreciating diversity: if your ideals don’t align with the team-left narrative, you will not be celebrated.

In the midst of Black History Month, Amazon pulled a critically acclaimed and popular documentary on conservative Justice Clarence Thomas, the only black justice currently serving on the Supreme Court, from its streaming platform.

The documentary, “Created Equal: Clarence Thomas in His Own Words,” is “currently unavailable to watch in your location,” the website reads when the title is clicked.

The outage appears to be nationwide, as reported by Breitbart.

Commies gonna commie, and Bezos is a commie.  So are a huge chunk of the people running Amazon.

Posted by Ragin' Dave at 09:13 2 comments:
Email ThisBlogThis!Share to TwitterShare to FacebookShare to Pinterest
Labels: Democrats hate you and want you to die, Leftist Tyranny

The proof of the pudding is in the tasting

You want to live through a pandemic?  Stop electing Democrats.

Now that the pandemic has dealt severely with every state in the country, it’s fair to evaluate individual states’ performance—and it’s clearer than ever which ones are responding effectively.

I think all the drugs they were doing in the 60's and 70's have come back to hit them, even the ones who weren't born then.  Don't ask me how that works.  I don't know.
Posted by Ragin' Dave at 07:19 No comments:
Email ThisBlogThis!Share to TwitterShare to FacebookShare to Pinterest
Labels: Blithering Idiocy, Complete Incompetence

Most of the media in this country is garbage, and this little cartoon nails it. 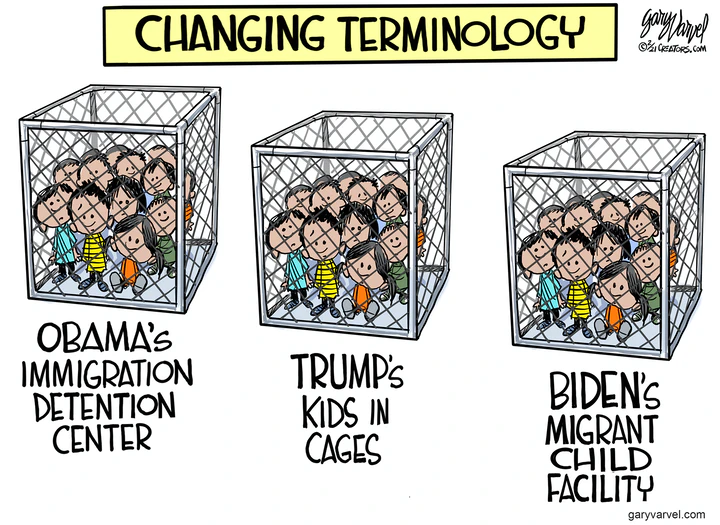 Posted by Ragin' Dave at 07:29 No comments:
Email ThisBlogThis!Share to TwitterShare to FacebookShare to Pinterest
Labels: Meme LIfe

It happened in Texas.

In short, between Feb. 8 and Feb. 16 wind power plunged 93% while coal rose 47% and gas 450% according to the U.S. Energy Information Administration (EIA). What all this demonstrates, says the Journal, is that an electricity grid that depends on unreliable wind and solar needs baseload power, especially coal and nuclear power.  While natural gas is crucial it is not as reliable.

The mainstream media wanted to hear none of this.

The Cult of Glow-bull Warming is the new religion, and the cult members are zealots.  I like to blow their minds out by reminding them that twenty thousand years ago, the middle of our country (Kansas to be specific) was under two miles of ice.  What caused all that ice to melt, hmmmmm?  Coal-fired electric plants?  SUVs?

If your state is planning on switching to wind power, tell them "NO!" in no uncertain terms.

Posted by Ragin' Dave at 07:16 No comments:
Email ThisBlogThis!Share to TwitterShare to FacebookShare to Pinterest
Labels: Global Warming Hoax

Posted by Ragin' Dave at 01:00 No comments:
Email ThisBlogThis!Share to TwitterShare to FacebookShare to Pinterest
Labels: Gimme that Old Thyme Religion

I listened to some of the Merrick Garland hearing

You can go read the transcripts, but please understand that the transcripts don't convey just what a shambling, pathetic excuse of a man Garland truly is.  He can't get one single sentence out without stammering, "um um um um um" and other verbal tics.  This guy was a prosecutor?  I think that explains the horrible condition of our judicial system.

Posted by Ragin' Dave at 16:44 No comments:
Email ThisBlogThis!Share to TwitterShare to FacebookShare to Pinterest
Labels: Babbling Idiots, Nucking Futs

Did Biden slur the n-word in a speech?

I honestly don't think he did.  I think he's so far gone into dementia that even as he's reading a teleprompter he glitches and babbles out nonsense.  I can't begin to imagine the drugs they use to keep that drooling halfwit upright.  So when his eyes cross and he begins a word salad of bullshit, it's just another sign that he's a brainless puppet who long passes his expiration date.

Posted by Ragin' Dave at 07:20 No comments:
Email ThisBlogThis!Share to TwitterShare to FacebookShare to Pinterest
Labels: Well and Truly Fucked

Every time you think Seattle can't get worse, they get worse

Free drug pipes!  And lessons on how to use heroin RECTALLY.

Rantz reports that the “low-barrier shelters” say they give advice on “harm-reduction techniques,” which apparently includes showing addicts how to better hide their addictions by injecting the drug rectally.

They even provided helpful how-to posters inside the shelters and encouraged residents to ask them how to rectally inject heroin or smoke it because “smoking is a lower-risk alternative to injection. Give it a try!”

The government of Seattle is enabling the drug addicts that have taken over downtown.  I used to jokingly refer to Seattle as "San Fran North".  It's not a joke any more.  You couldn't pay me to go to Seattle right now, as I don't want to step over human feces and used needles in order to get a cup of coffee, and I don't want to be assaulted by some drug addict trying to get money for his next hit.

Posted by Ragin' Dave at 07:17 No comments:
Email ThisBlogThis!Share to TwitterShare to FacebookShare to Pinterest
Labels: What a Shithole

Because the government does not care about truth, facts, or reality.

In yet another story purporting to confirm the left’s view of the world, Jana Winter reported in Yahoo News Friday that “the U.S. government is acknowledging for the first time that right-wing extremists were responsible for the majority of fatal domestic terrorist attacks last year, according to an internal report circulated by the Department of Homeland Security last week.” But as you might expect, it’s long on vague assertions and decidedly short on facts.

This is another lead-up to destroying your constitutional rights under the guise of "defeating terrorism".  They didn't do a fucking thing about BLM or Antifa, which BURNED MINNEAPOLIS TO THE GROUND.  They happily released Antifa shitstains who were trying to burn a US courthouse in Portland.  They allowed Antifa to take over entire portions of Seattle and Portland.  They stand by while Antifa flat out murders someone (although another state caught the murderer, who died after the po po shot his ass).

But despite the sheer volume of pictures, video, and witnesses to Leftist violence, they are going to focus on "right-wing" terrorists.

Keep your head on a swivel.  The Left is coming for you, and they're going to use the government to do it.

Posted by Ragin' Dave at 07:21 No comments:
Email ThisBlogThis!Share to TwitterShare to FacebookShare to Pinterest
Labels: Democrats hate you and want you to die, The Death of America

For the First Sunday of Lent