I'm busting my ass yet again for the military this weekend, and when I come home to relax I find THIS?

If you didn’t think the whole “controversy” surrounding Tucker Carlson’s commentary earlier this week on how the Department of Defense is busy politicizing and feminizing the U.S. military as China makes their military more masculine could get any more absurd, you were wrong.

When last we left you, the DOD was furiously issuing official statements on Carlson’s comments as well as having their spokespeople do interviews on cable news outlets to condemn Carlson and assure perpetually-outraged outraged leftists that they were 100% committed to “diversity”:

If this is how the military is spending their time and money, the entire top brass needs to be cleaned out.  The more of this bullshit I see, the more I can't wait until I retire.

Even the Marines aren't immune to the pussification of the military.

I’ve never seen anything like this. It’s nuts. Can you imagine if somebody did this while Trump was president? Just picture a uniformed military officer calling out Anderson Cooper or Rachel Maddow. Every newspaper in the country would be $#!++ing bricks directly onto the front page. Brian Stelter’s head would explode like somebody forgot to poke holes in it before putting it in the microwave. Human sacrifice. Dogs and cats living together. Mass hysteria.

If Tucker wanted to prove that today’s armed forces need a priority check, he couldn’t have written a better script than this. The military isn’t supposed to be publicly haranguing American citizens for criticizing them.

Well, I think any worries people had about military control of this country can be laid to rest.  Just who the hell would do their fighting for them?  Pregnant trannies who identify as pan-gender unicorns who demand new fancier uniforms?  WHAT THE FUCK ARE THESE IDIOTS DOING?  Not preparing for wars with peer or near-peer adversaries, that's for sure.

This country is in a tail spin.

Posted by Ragin' Dave at 21:47 No comments:
Email ThisBlogThis!Share to TwitterShare to FacebookShare to Pinterest
Labels: Military Life, Nucking Futs

Naked and senile is no way to go through life, Son.

It’s weird that our elite betters of eliteness and betterness refuse to acknowledge that the emperor not only forgot to dress himself today but that he’s actively drooling. Check out President Asterisk trying to figure out who the Secretary of Defense is. Not that SecDef is an important job anymore or anything. His gig now is mostly to rid the ranks of extremists who don’t think men can change into women through the power of activists demanding everyone else pretend they can. But still, the president ought to, you know, know who he is.

President Asterisk isn't running the show.  He's not running a damn thing, and everybody knows it.  The drooling halfwit can't even mumble his way through a scripted teleprompter speech.  God only knows what kind of drugs they're pumping into him to make him actually stay upright until 7 PM.

Posted by Ragin' Dave at 05:56 No comments:
Email ThisBlogThis!Share to TwitterShare to FacebookShare to Pinterest
Labels: Biden is a puppet, The Death of America

Nope, not getting the Chinkvirus jab

A 39-year-old single mom in Utah with no underlying medical conditions died four days after receiving her second dose of the Moderna COVID-19 vaccine, according to a report.

I don't fear this virus.  I don't believe that it's as deadly as it's made out to be, especially when I see reports of people dying in a motorcycle accident being listed as a Kung Flu death.  "But Dave, that's just one case!"  Exactly.  That means there's a shit-ton of other cases that we're being lied about that we're not catching in the act.

The Kung Flu hysteria is the greatest politically-motivated sham job to ever be pulled on the American people.  And the sham job worked.  It got rid of Trump.  It gave Democrats absolute power to do whatever they wanted to do.

Posted by Ragin' Dave at 05:50 5 comments:
Email ThisBlogThis!Share to TwitterShare to FacebookShare to Pinterest
Labels: Get Down With The Sickness

I read this headline, and I think "Well, Duh!"

The Democratic Party stood virtually united “resisting” Trump for four years. Their stalwart opposition was ruthless and unwavering. It had been my hope that if there was any lasting legacy of Trump in the Republican Party it would be that he taught them not just to not walk away from a fight but to actually fight back.

Yet again, I find myself disappointed.

We've all known for years that the GOP establishment was a collection of spineless grifters, gutless cowards, back-stabbing traitors, pathetic wimps in gimp suits who give up any and all principles when told to do so by the DNC masters.

Now, we've gotten some good ones in office over the past few election cycles, but Mitch McConnell is still in control.  And that means that there are a majority of RINOs and traitors in the GOP to keep him in power.

Any spine McConnell showed over the last four years was loaned to him by Trump.  And when Trump left, so did that spine.

Posted by Ragin' Dave at 07:29 6 comments:
Email ThisBlogThis!Share to TwitterShare to FacebookShare to Pinterest
Labels: McConnell must go, The Stupid Party

You get what you vote for,

And you get it good and hard.

According to researchers Kathryn McCollister and Michael French of the University of Miami, and Hai Fang of the University of Colorado, the total economic cost of a murder (adjusted for inflation) is more than $11 million. Critically, murders and aggravated assaults together represent the lion’s share (over 70 percent) of the cost of all crime. That would put 2020’s murder tax at $220 billion—$45 billion more than 2019. Similarly, aggravated assaults, including shootings, will tally at least another $120 billion in social costs.

The social cost of homicide includes robbing families of breadwinners, burdening law enforcement, courts, and corrections systems, and depriving communities and citizens of peace of mind and opportunity. This staggering “murder tax” is borne largely but those who can least afford to pay, America’s urban poor.

America's Urban Poor, who haven't voted for a Republican in their lifetimes.  This is being called the "Minneapolis Effect".  Minneapolis had it's last Republican mayor in 1973.  And he was only mayor for ONE DAY (don't ask me why, I don't know).  Prior to that, the last full-time Republican mayor left office in 1961.

Posted by Ragin' Dave at 07:36 2 comments:
Email ThisBlogThis!Share to TwitterShare to FacebookShare to Pinterest
Labels: Democrats, Fuck the Fucking Fuckers, This is what they want

Cuomo might be out, but not for the reason he should be out

Andrew Cuomo is America's worst governor, a stupid, arrogant blowhard narcissist.  And he might finally get kicked out of his seat, but it's been amazing to watch the DNC Media protect him from the real reason he should be removed:  His orders which caused thousands upon thousands of deaths.  But if people held Cuomo responsible for what he did, they would have to do the same to other Democrat governors, and as we all know, the media's job is to protect them Democrat party.

What this means is that if the corrupt media were to do the right thing (like that will ever happen) and go after Cuomo over his deadly nursing home policy, it would open a Pandora’s Box against these four Democrat governors and the Democrat party as a whole, which is something our fake media will never do.

Democrats must be protected at all costs, even if the cost is thousands and thousands of lives.

Now, if he gets kicked out because he can't keep his hands to himself, I won't shed a tear.  He's a mook.  He's a bully, and both he and his brother are where they are because their daddy was a mob boss, and they rode his coat-tails to money and prestige.  I won't shed a tear if he gets removed.  But him hugging women a little too long is nowhere near as horrible as him demanding that nursing homes accept infectious patients, thereby killing thousands of people.

Posted by Ragin' Dave at 07:23 No comments:
Email ThisBlogThis!Share to TwitterShare to FacebookShare to Pinterest
Labels: Democrats, Get Down With The Sickness, Hypocrisy thy name is Democrat

You know who I feel betrayed by?  Idiots who call themselves Pro-Life but voted for a drooling halfwit who supports abortion without restrictions.

Yet they voted for Biden on the belief that he was a moderate, and that despite his explicitly radical pro-baby slaughter position, he would be the cordial grandpa who brought civility back to D.C.

He told us this was his goal! He made no bones about it.

I don't know how anyone who claims to be Pro-Life could listen to what Biden said, read his statements, and decide "Yeah, I'm gonna vote for this guy!  He seems like he'll protect the unborn children!"

Dude, Biden won't even protect the children who have been born - look at what he's doing on the border, where coyotes and the cartels are free to traffic in child sex slaves again.

So congratulations, pRo-LiFe eVanGeLiCals for BiDeN, you just helped cement the very real potentiality that our taxdollars will be actively used to murder children by the millions in the womb. And that's just the beginning.

But at least we don't have mean tweets anymore.

If you voted for Biden, you voted to murder babies in the womb.  That was never in question.  It was clear from the start.  These so called "pro life" people are either willfully blind or lying.

Posted by Ragin' Dave at 07:22 3 comments:
Email ThisBlogThis!Share to TwitterShare to FacebookShare to Pinterest
Labels: Democrats, They want to kill babies

When Joe Biden signaled his open-borders plan, it triggered human traffickers south of the border to start teeing up swarms of people to storm the U.S. and flood the already COVID-pandemic-slammed U.S. labor market. But now we learn that the Biden administration has not been COVID testing the illegal immigrants swarming the border before they’re released into the interior of the U.S.

Joe Biden knew this before he opened the borders. He gobsmackingly asserted that the U.S. “didn’t have a COVID vaccine” and claimed the pandemic was so severe he had to spend nearly $2 trillion to fight it.

The Washington Examiner reports that the Border Patrol and the Department of Homeland Security are not COVID-testing the illegal aliens and their children. Why? Even if they did test positive, “they cannot return children and some families.” Adults can be deported, but not people with children. 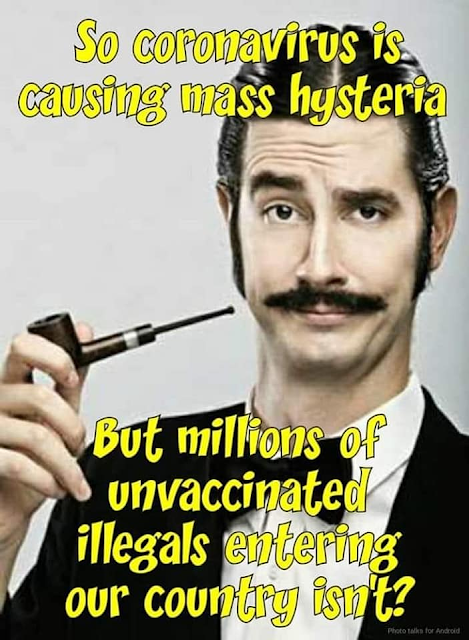 This is all about attacking YOU, Mr. and Mrs. Joe America.  That's their only real goal.

Posted by Ragin' Dave at 07:11 No comments:
Email ThisBlogThis!Share to TwitterShare to FacebookShare to Pinterest
Labels: Democrats love illegal aliens but not Americans 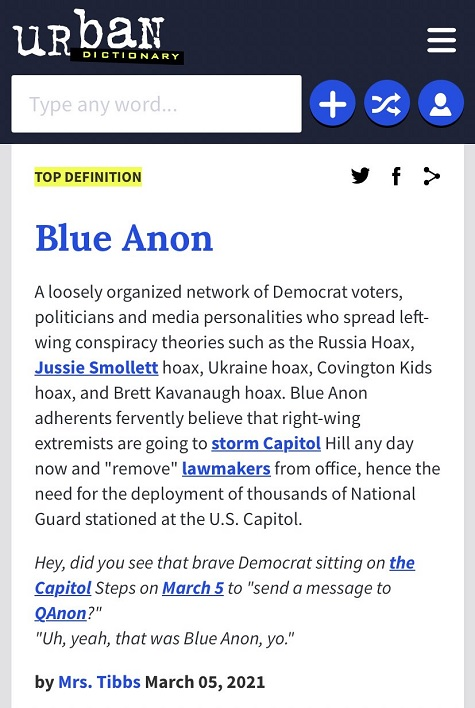 Posted by Ragin' Dave at 09:36 No comments:
Email ThisBlogThis!Share to TwitterShare to FacebookShare to Pinterest
Labels: Democrats

I got nothing today

The Mrs. and I are going riding.  Maybe that'll help stoke the ol' brain cells into functioning.