I went to a funeral yesterday

A fellow Soldier.  I didn't know him too well, as I've only been here a couple of months.  But in any case, a funeral is not for the dead.  It's for the living.  The dead don't care any more.  The living care.  And when the widow looked up and saw her family in the middle of the churched, flanked by rows of Soldiers on either side, it did her good.

The guy died of cancer.  He was diagnosed in early September, and died two and a half weeks later.  He was healthy as a horse.  Didn't do stupid crap to his body.  Worked out religiously.  One year away from retirement.  Gone.  Less than a month from "Hey, I don't feel too well." to pushing up daisies.

Folks, love the people you're with every single day.  Love them as if you won't get a chance to love them tomorrow.  Because life is funny.  You can do everything right and end up dead before 60.  Winston Churchill drank like a fish, smoked cigars all day long, and lived into his 80's.  It's a crap shoot.

Every time I leave the house, I tell the wife that I love her.  That way, should lighting strike me on my way down the road, the very last words my wife will have ever heard from my mouth are "I love you."  I don't think I'm going to die today, but God might have other plans, and I don't want the last words my wife to hear from me to be a grocery list or some trivial stuff.
Posted by Ragin' Dave at 10:05 No comments:
Email ThisBlogThis!Share to TwitterShare to FacebookShare to Pinterest
Labels: Personal crap

I had no clue about the Viper "Militia"

But chalk this up as another reason to never trust the Feds.  Especially when a Democrat is in the Oval Office.

Posted by Ragin' Dave at 01:00 1 comment:
Email ThisBlogThis!Share to TwitterShare to FacebookShare to Pinterest
Labels: Do Not Trust Them, Government Thugs, Total Corruption

Americans pay more in taxes than on food, clothing and medical care combined

Things that cannot go on forever will not.  Buy more ammo.

The combined payments the average American consumer unit made for these five categories of taxes was $18,617.93.

Everybody feeling all warm and happy yet?  While Schiff for brains and the rest of the Democrat Party use our government to destroy the rule of law and make a mockery out of the justice system?
Posted by Ragin' Dave at 05:49 No comments:
Email ThisBlogThis!Share to TwitterShare to FacebookShare to Pinterest
Labels: Death and Taxes, We need more tar and feathers

At this point, it's pretty obvious to me that the publik skool sistim has blown right past failure and flew into the malignant point of it's existence.  It's not there to educate your kids.  It is there to ensure your kids never get an education so they can be ignorant drones and slaves to the "elite" of the world.

I truly am.  But I wasn't in any position to give advice, otherwise I would have grabbed Harry by the ear, pulled him into a dark ally and told him to run away from the 2nd-rate Hollywood Whore as fast as possible.

No, what Meghan has done is drag with her, across the Atlantic, a garbage truck full of the most emetic US wokeness and deposited it on our front lawns. She has brought with her the infantile identity politics of Hollywood and US campuses, with all its non sequiturs, its bizarre obsessions, its mutual contradictions and its self-evident hypocrisies. The politics of Taylor Swift and Robert Downey Jr. The sort of stuff which, in the end, convinced your people to vote for Donald Trump, as a kind of blessed relief, a form of deliverance.


I was told by a traveler of my acquaintance that Meghan Markle was somewhat popular across the pond, but that was some time ago and things may have changed.  Nevertheless, should Harry tire of schtupping a washed-up actress with all the morals and principles that Hollywood is famous for, I can only say "Sorry, you bought it, you keep it."

We don't want her back.
Posted by Ragin' Dave at 01:00 1 comment:
Email ThisBlogThis!Share to TwitterShare to FacebookShare to Pinterest
Labels: Celebrity Stupidity, Hollywood Hijinks, World Affairs

This was correct, but not vituperative enough for me

To which I say, what drugs are these fucking morons smoking?  What color is the sky in their world?

My entire political life has been one long assault by the Left on America, Patriots, and anyone else to gets in the way of their Marxist dream of subjugating every single free person in the world to their tyrannical desires.  At exactly what point do whiners like Erickson, and yes, I think that FredoCon Never-Trump whiner is describing himself, wake up to the fact that the war will never be over because our enemies don't want it to be over, and they have a vote on how long it goes?

The Democrats and other enemies of America will never stop attacking America until it's destroyed and they can build their socialist utopia on the rubble.  So unless you want to live in an American gulag, suck it up, you whiny piece of shit.  Or shut the fuck up and go over to the other side, the way so many GOP establishment losers want to do.  Oh, but then you'd lose your cushy gig pretending to oppose the Marxist traitors of the Democrat party, and what would you do then?  Gosh, do you know how much arugula costs these days?  Gotta pay them bills, right?  But you still need to hang out in the right circles, so maybe some token resistance will do?  Gosh, you're just so TIRED and all.

I'm rapidly finding out how many "conservative" media figures I don't need to read, listen to or watch.  What the hell have they actually conserved?

Let the tired whiners go somewhere else.  If they don't want to fight, I don't need them at my side.  But don't think I won't remember their names.
Posted by Ragin' Dave at 07:11 2 comments:
Email ThisBlogThis!Share to TwitterShare to FacebookShare to Pinterest
Labels: FIGHT BACK!, The Death of America

Zion National Park is actually a canyon and the surrounding lands.  The canyon goes up several miles, and then you get to a part where it's just the river, coming straight out of a cliff.  That's still part of the park.  It's called "The Narrows", for obvious reasons.

And you can still hike it.

There's no trails, there's no road, there's 17 miles of river and cliffs on either side.  Wear good shoes.  Make sure that they won't be affected by the water.  The very beginning of the hike was quite popular. 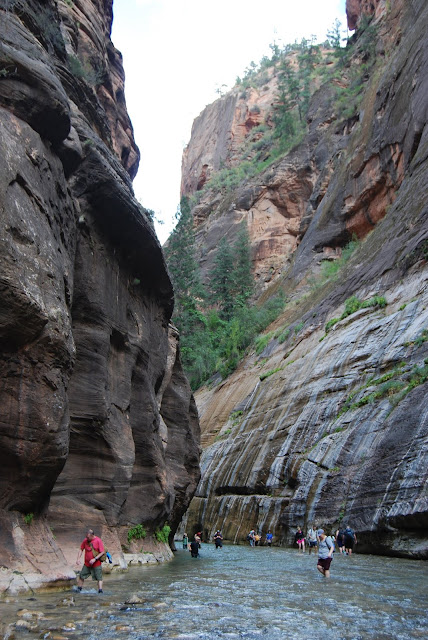 But as you got further into the canyon, the number of hikers dwindled.  And if you zoom in on this next picture, you can see a group of hikers on the left side of the river, just to get a sense of scale.  The hardest part of taking photos is the understanding that there's no way a single photo is going to give you the SCALE of this place.  It's massive.  And it's breath-taking in every positive aspect of the words. 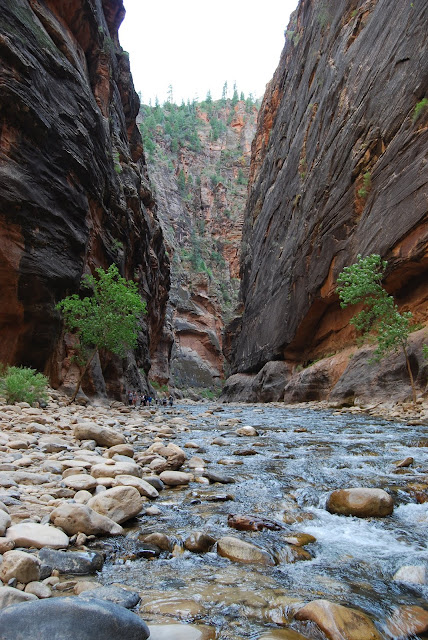 It's also the reason why my knees still hurt yesterday.  Still did a work-out.  We'll see what happens today, and how I feel.
Posted by Ragin' Dave at 07:00 No comments:
Email ThisBlogThis!Share to TwitterShare to FacebookShare to Pinterest
Labels: Personal crap, Photo Time

I had managed to knock huge chunks off the to-do list.  The bike is up and running.  School work completed for the month.  Got my re-certification work done for the Motorcycle Safety Foundation.  Peaches canned.  Brewing started!  And then my neighbor gave me a five-gallon bucket full of grapes.

I'll be juicing those tonight.  We'll see if they make it into brewing, or if we just drink it.  There's no way I can eat that many grapes before they go bad, so I have to juice them to be able to use them down the road.

This first photo is the view from the top of Angel's Landing, Zion National Park.  And yes, I hiked up there.  No, there's not an elevator, escalator, motorized lift or any mechanical transport.  It's a trail.  With chains attached to the rocks so there's something to keep from falling two thousand feet to your death. 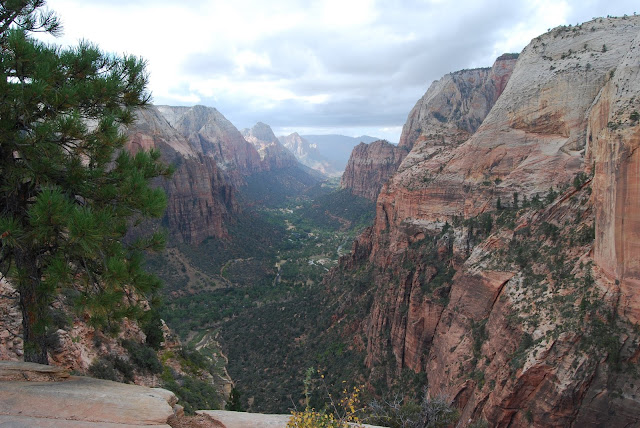 Did I mention the thousands of feet to the ground? I did?  Good.  This next photo is of the saddle that you traverse to get to the chains.  I can't embed the full sized photo, and I can't put the photo up as full sized because it would cause this website to have fits.  However, you should be able to zoom in enough to see the people, which gives you an idea of the sheer scale of the cliff. 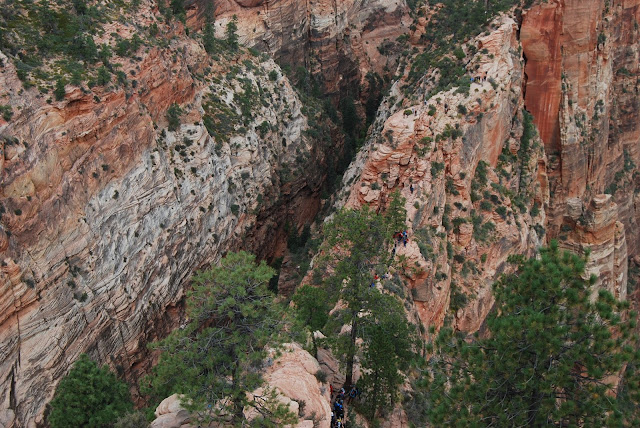 Yes, I have more photos.  Later.
Posted by Ragin' Dave at 07:07 2 comments:
Email ThisBlogThis!Share to TwitterShare to FacebookShare to Pinterest
Labels: Personal crap

I have to pare them down from the multitude I took, to a few that people will want to print out.

Thank god for digital.  I can remember coming back from vacation and having to process over twenty 35mm film canisters.  Cost me a fortune.
Posted by Ragin' Dave at 06:44 3 comments:
Email ThisBlogThis!Share to TwitterShare to FacebookShare to Pinterest
Labels: Personal crap

What fresh hell is this?

And yes, this is clickbait.

Ice Cream Potato. Only in your fevered pipe dreams, you crack smoking morons.
Posted by Ragin' Dave at 01:00 No comments:
Email ThisBlogThis!Share to TwitterShare to FacebookShare to Pinterest
Labels: Straight up BULLSHIT

Have mercy on me, Lord.  Some days I feel like that's the only prayer I should be saying, repeated until I don't have a voice left.

I'm blessed that people have managed to put it in much more beautiful terms.