Ok. First, you MUST read this! That will provide the backstory that makes the following taste oh soo sweet. Back on July 11, I (TVE) responded to the following portion of the news story about their world healing relationship:

They were married in Islamic ceremonies in Egypt and Saudi Arabia and are awaiting permission from the authorities in Riyadh to make their marriage official.

By saying (with much sarcasm):

Now let's get up to speed on this steamy internet romance:

LONDON — A British woman who married a son of Usama bin Laden says the couple is divorcing because of opposition from his family, The Sun newspaper reported Wednesday.

Oh, no fucking way! Who could have ever predicted this?!

Jane Felix-Browne, a 51-year-old grandmother from Moulton, a village in northwestern England, married Omar Bin Laden, 27, in both Egypt and Saudi Arabia in April. But Felix-Browne said, according to The Sun, that bin Laden's family members feel they have been humiliated. The newspaper quoted her as saying her husband had been threatened in a telephone call, but she did not identify the caller or give details about the threat. Omar was told he shouldn't be married to me, and there was a very good chance he would be taken to prison," The Sun quoted her as saying. "Omar knew who it was on the phone, but he wouldn't tell me. After the call he said he felt both our lives were in jeopardy. She could not be reached for comment Wednesday morning.

Time out. Let's help Nanna Jane out. IF there was a phone call, it went something like this:

Omar - "Death to infidels, this is Omar."
Ayman - "Omar! It's Ayman! Did you get the bomb vests I sent your kids?"
Omar - "Ayman! Yeah, we got them. Praise Allah!"
Ayman - "How's the plan to gain British citizenship?"
Omar - "Don't get me started! If I have to send that old imbicile one more text message, I'M going to use the bomb vest!"
Ayman - "Well then today is your lucky day! We figure, fuck it. It was worth a shot. You're off the hook."
Omar - "Merciful Allah! I owe you big time!"
Ayman - "Just tell her you got a death threat. Act really sad!"
Omar - "Thanks Ayman. Hey, how's Waziristan?"
Ayman - "We'll talk later."

Back to the proclamations of an imibicile:

"People are opposed to my marriage because I am British. I wasn't prepared to see the man I love die," she was quoted as saying.

And this woman has been muslim pickle-chugging since age 16? You're a convert, nanna! Tainted! It doesn't matter where you were hatched.

"It was a really, really good marriage, a strong marriage.

Was it strongest when you were instant-messaging, or when he was banging the mother of his children back in the desert?

But I cannot stand by and watch my beloved husband die before my very eyes.

Unless she has high-speed internet the web cam footage would have been all choppy, so it wouldn't have been all that traumtic to watch.

"The bin Laden family are afraid of the political implications of a British woman being married to the son of Usama bin Laden. They fear embarrassment and complications, not just in their own country but also in Britain and America," Felix-Browne was quoted as saying.

Marrying an imbicile - embarassing. Spawning THE global arch-terrorist - in all the scrapbooks! What could they possibly have to fear over their relationship in the US and UK? Smell the camel crap?

The Sun quoted Omar bin Laden also as saying "this marriage is now over. I don't want a divorce, but there are serious reasons for this breakup that I can't talk about. I adore being with this woman. But we can't stand up when the waves from the sea are coming to wipe us out."

That, and his other wife just wouldn't stop bitching about all the time he spent online.
Posted by The Valiant Elephant at 02:52 No comments:
Email ThisBlogThis!Share to TwitterShare to FacebookShare to Pinterest
Labels: Terrorist Leftist Nexus

It's cooler where I'm at right now. I don't think we're at a higher elevation, but it's in the 70's and 80's with low humidity. Weather-wise, I'm in heaven.

Haven't been listening or watching any politics. Sorry, you'll have to go somewhere else for your daily dose. I'll be somewhat back to normal in a week. Until then, just keep dealing with light posting.

But since I'm in a picture posting mood, enjoy today's selection. As with the other pictures, if you want to use them as a desktop or whatever, go ahead. If you want to publish them, please do so under this blog's web address. Click on the picture for the full size.

Daffodils on the roof of Pike Place Market, Seattle. Size is 398KB 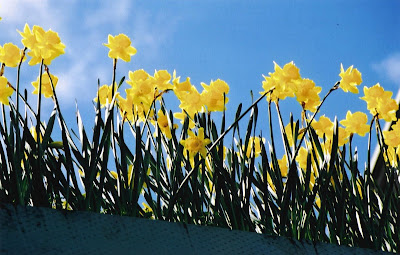 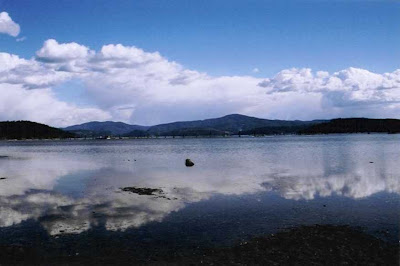 A gentleman who was obviously all too happy to get his picture taken. The shop is "The Daily Dozen", a donut shop in Pike Place Market, Seattle. Size is 683KB. 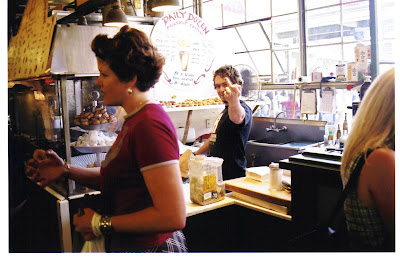 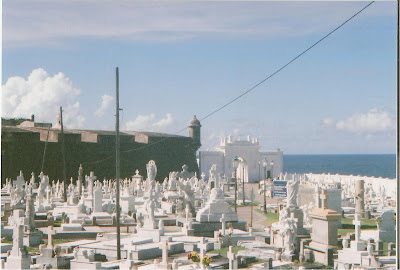 Enjoy, and I'll have more for you tomorrow.
Posted by Ragin' Dave at 15:50 No comments:
Email ThisBlogThis!Share to TwitterShare to FacebookShare to Pinterest
Labels: Personal crap

Og suggested that I post a few pictures as Free Wallpaper. So what the hell. Here's a few of the more recent pics that I've got. (Recent meaning within the past two or three years) Click on the picture for the full sized version. Feel free to download away. 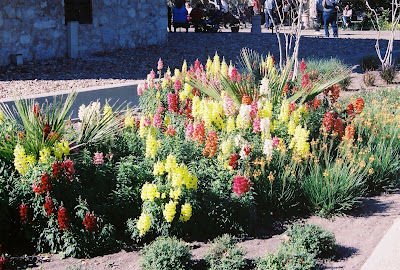 This is the Seattle Space Needle, reflected in the metal siding of the Experience Music Project. It's 281KB. 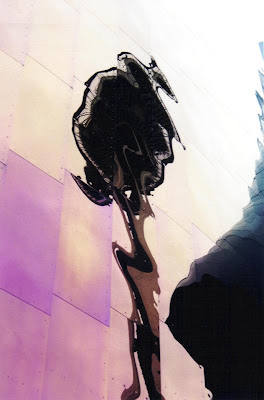 This is a harbor near Norfolk, VA. 258KB 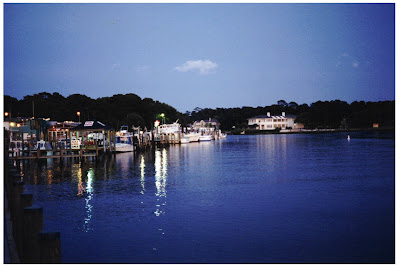 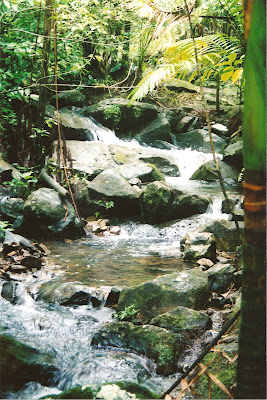 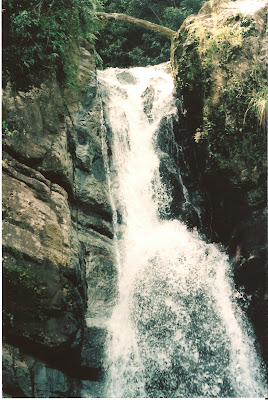 I'll post some more later on this week.
Posted by Ragin' Dave at 08:46 No comments:
Email ThisBlogThis!Share to TwitterShare to FacebookShare to Pinterest
Labels: Personal crap

We're going to visit even more family today. Rental car, I-10, and a little cash in my pocket. The wife sitting next to me picking the tunes. Should be a fun ride.

Couple of things caught my ear lately. One - everything that's going on in the world, and all I hear about from the MSM is how Sally Frickin' Field was "censored" by Fox?

What? Ummmmm.... I've heard the full audio. She let the word "god-damn" slip out of her lily-white lips, and the last time I checked A TELEVISION COMPANY WILL GET FINED FOR THAT. So they bleeped it. This is news? This is what the MSM wants people to think of as news? We've got France, FRANCE FOR GOD'S SAKE, saying that we should prepare for the bombing of Iran, a war still ongoing in Iraq, a war still ongoing in Afghanistan, Iran stirring up shit, and the only thing that CBS/NBC/ABC/PBS/Nutroots can howl about is that they think Sally Field got censored?

What a steaming load of bovine manure. What more proof do you need that the Left in this country is a vapid group of empty-headed twatwaffles who are unable to deal with modern day life?

Anyways, I don't know what the internet is going to be like at the place we're going. I'm taking the computer, so I could always find a coffee shop and do a post, but I've been enjoying being active and not in front of a computer. We'll see.

Oh, by the way, if anyone wants to use those pictures below for wallpaper or whatever, go right ahead. Click on the pick for the full sized version, and save away.
Posted by Ragin' Dave at 08:34 No comments:
Email ThisBlogThis!Share to TwitterShare to FacebookShare to Pinterest
Labels: Democrats, General Stupidity, The Media is not your friend

Don't ever let me catch them

The dear old Left in America. I guess it's easier to spit on the troops when those troops are already dead. We all know that the canard of "But we support the troops!" is plain and simple bullshit when it comes from the mouth of any Leftist. They can't even support the DEAD troops, much less the live ones.

Don't ever let me catch whoever did this, because if I manage to get my hands on them, nobody will ever see or hear from them again. And that's a promise. No screaming, no big scene, they will just..... disappear. Forever.
Posted by Ragin' Dave at 15:50 No comments:
Email ThisBlogThis!Share to TwitterShare to FacebookShare to Pinterest
Labels: Democrats, Domestic Enemies

Yeah. I enjoyed it.

Big pictures to follow. Sorry if you're on dial-up.

A view from the Rim. The Rim is a plateau that pretty much goes straight down, and it provides one hell of a view of northern Arizona. Fresh air, cool breeze, and cool weather. It was perfect for hiking. 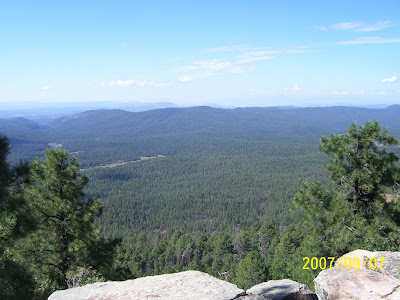 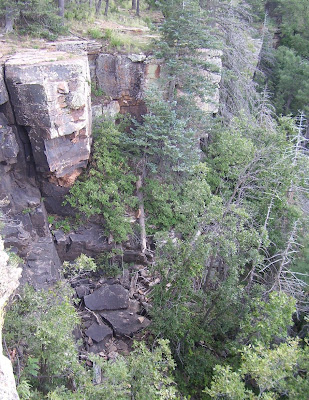 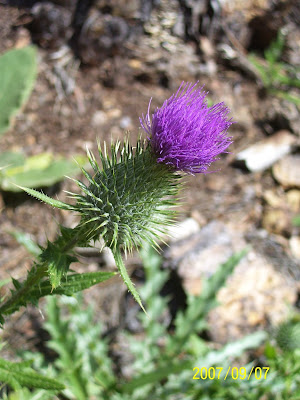