If I actually still watched the NFL, I might be upset

As it is, I'm laughing my ass off.
Buh bye, NFL.  Get woke, go broke.
Posted by Ragin' Dave at 01:00 No comments:
Email ThisBlogThis!Share to TwitterShare to FacebookShare to Pinterest
Labels: It is to laugh

I ain't saying Cosby is innocent

But dayum, I think he got the shaft.
Posted by Ragin' Dave at 01:00 No comments:
Email ThisBlogThis!Share to TwitterShare to FacebookShare to Pinterest
Labels: Must View

Tell the panic pornographers to piss off

Here's real actual DATA, not the fearmongering and bullshit spread by that fucking demented clown Fauci.  Take the three minutes to watch the video.

Posted by Ragin' Dave at 07:37 No comments:
Email ThisBlogThis!Share to TwitterShare to FacebookShare to Pinterest
Labels: Get Down With The Sickness

Who would have thought that a communist whore with no real talent other than sucking off powerful men might have a problem keeping staff?

I mean, gosh, just look at her credentials!

The top dogs there take credit for the good and blame others when things go south. It's a story that's been replayed many a time in other workplaces as well. Yet, this dysfunctional family picnic is soon going to spill over into other areas involving the president, so Biden will soon have a Kamala Harris problem. He probably already does.

Politico alleges that there is a cone of silence that insulates the VP, built by her top staffers who often ignore input from others or cruelly dismiss it. Two advance staffers bolted reportedly over this dynamic in what appears to be a toxic office environment

Kamala Harris was picked because she has the right skin color and a vagina.  That's it.  There's no single thing that qualifies her for the job, given that the only thing she's proven to actually be good at doing is whoring herself out to gain political power.  She's not even a good speaker.  Barry O'Bumblefuck could at least work a teleprompter.  Kamala Harris makes people stop listening, what with the whiney, nasal, stuck-up-bitch tone that she's helpless to prevent coming out of her cockholster.

At this point, I'm just watching the dumpster fire and popping a beer.

Epic Troll of the Biden junta and it's various string-pullers.

If you’re the governor of Texas, and you have Biden’s border disaster on the one hand and a pile of federal money with few strings attached on the other, and you’ve got a wealthy primary challenger aiming to run at you from your right in 2022, what do you do?

Gov. Greg Abbott has just reached Grand Master level in epic trolling, while also enacting a popular policy that will do some good for his state.

Drooling Joe and the Commie Ho have turned the border into a disaster.  It's up to the adults to try to fix it.  Good on Abbott for doing that while also sticking his thumb in the FedGov's eye.

Posted by Ragin' Dave at 07:34 No comments:
Email ThisBlogThis!Share to TwitterShare to FacebookShare to Pinterest
Labels: Immigración

Fauci and his fearmongering can go fuck off

ERMAGHERD!  THE DELTA VARIENT!  STAY INDOORS!!  RUN AWAY!  Fauci pulls his schtick once again, and says the same retarded shit he's been saying for over a year now.  And then Rand Paul fires back. 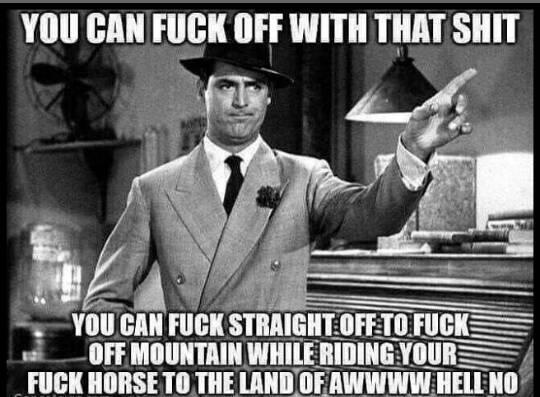 Well, ok, what he actually said was this:

But I like my version better.  The OHMYGODITISSOSCARY new version of the virus will be just another opportunity for the fascists and dictators to try to keep control.  Stop giving in to them.  And Fauci need to be in jail.
Posted by Ragin' Dave at 07:05 2 comments:
Email ThisBlogThis!Share to TwitterShare to FacebookShare to Pinterest
Labels: Fuck the Fucking Fuckers, Get Down With The Sickness

Drooling Joe calls another lid on his "Presidency"

I guess DOCTOR Jill is going to do the job now?

It was reported on Sunday that Joe Biden will not be attending the opening ceremony of the Tokyo Olympics on July 23. Instead, he is sending his wife, Jill Biden. While this might not sound like a big deal, the devil is in the details. According to the report, Jill Biden “holding a meeting with Japanese Prime Minister Yoshihide Suga [is] among the possible events the two governments are looking into.”

Posted by Ragin' Dave at 17:43 No comments:
Email ThisBlogThis!Share to TwitterShare to FacebookShare to Pinterest
Labels: A Dumpster Fire Being Dropped Into A Septic Tank, Biden is a puppet

Lt. Gov. Robinson GOES OFF in One of the Best GOP Speeches You’ll Ever Hear

Posted by Ragin' Dave at 19:04 No comments:
Email ThisBlogThis!Share to TwitterShare to FacebookShare to Pinterest
Labels: Must View

Move your pathetic ass somewhere else.  You don't like America?  Fuck you, leave.

A hammer thrower turned away from the American flag and covered her head with a T-shirt that read “Activist Athlete” when the national anthem was playing during the Saturday U.S. Olympic track and field trials.

Get the fuck out of my country, you ungrateful bitch.  I'm done having people who have reaped the rewards of America turning around and shitting on it at every opportunity.

Posted by Ragin' Dave at 06:48 5 comments:
Email ThisBlogThis!Share to TwitterShare to FacebookShare to Pinterest
Labels: anti-American

The day of happy chores

Working on the bike.  Finally got my turn-signal relay in, so that my LED turn signals don't cause an epileptic seizure to some poor bastard behind me.  Got that installed.  Cleaned and greased the shifter lever.  Had to go to the shop to find out what kind of grease they used, since the stuff I had here only lasted about 1000 miles.  Bought a tub of that for $10, since I'll be using it for the shifter and any other part of the bike that needs it.  Guy at the shop was cool as hell, offered to just give me a little bit to take home, but I figured that since I'm doing the maintenance on the bike I might as well get the whole tub.  It'll probably last me the life of the bike.  Both mine and the Mrs' bike, for that matter.

Laundry.  Cleaning.  Making brats, since we're out.  The Mrs got twenty-four pounds of pork, so we're going to do a run of brats and freeze them for the summer.  Gotta give some away too.  Good people deserve good food.

It's quarter past eleven and I haven't showered yet.  That's on the to-do list.  The Mrs. won't give no lovin' if I'm a stinker.

I hope you're all having a great Sunday.  And I hope it gets better.