The lockdowns were a failure

And they probably extended the length of this current bullshit.

Regardless of all that, other countries in Europe that instituted government mandated YOU SHALL OBEY lockdowns are seeing a second wave of cases. This, in Courtney's esteemed opinion, seems to indicate the lockdowns don't work like the lockdown advocates want them to work. Or say they want them to work. Because, again in my opinion, the measures being shoved through in order to "save lives" are just a Trojan horse for socialism. The more the people comply with the increasing draconian orders, the more draconian orders we receive. Kind of like a "If you give a mouse a cookie" scenario. At this point, the mouse has completely taken over and we're just lucky to sleep on the floor.

We "flattened the curve" after two weeks.  But thanks to the lockdown, we didn't achieve herd immunity, and now we're on one big prolonged wave of the Peking Pox.  Whereas if we hadn't locked down we'd have had a spike in cases, and then a continual drop.  Kinda like Sweden.

What the mainstream press keeps forgetting to tell people is that it can take the government days, if not weeks, to record a COVID-19 death. The daily reports aren’t telling us what’s happening now, but what happened earlier in the month. The chart below shows the impact of this. The gray bars represent when deaths are reported by Florida, and the red bars are when the deaths actually occurred.

Anthony Fauci is a Democrat Operative in a white coat

I am long past tired of this fucking partisan shitstain.

During a House Judiciary Committee hearing on Friday, Rep. Jim Jordan (R-Ohio) pressed Dr. Anthony Fauci on whether the government should restrict the massive Black Lives Matter protests across the country in order to slow the spread of the coronavirus. Fauci admitted that crowds full of people not wearing masks would likely spread the virus, but he refused to say whether or not protests would do so. He also refused to make any recommendations on limiting protests, even though he had made many recommendations in the past.


Can anyone tell me just what the hell this demented clown has gotten right?  EVER?
Posted by Ragin' Dave at 17:06 No comments:
Email ThisBlogThis!Share to TwitterShare to FacebookShare to Pinterest
Labels: Democrats, Get Down With The Sickness

And this is why Democrats keep getting elected, and re-elected

Because there are people out there so stupid and moronic that they can't tell the difference between the national flag of Norway, and the "Confederate" flag.  Which wasn't the confederate flag to begin with, but a personal battle flag.  And none of that really matters, because neither the actual Confederate Flag nor the battle flag of the Army of Northern Virginia look anything like the national flag of Norway.  But again, people are stupid and ignorant, which is why Democrats keep getting elected and re-elected.  And this story comes out of Lansing, Michigan.  Lots of Democrats there.
Posted by Ragin' Dave at 07:32 No comments:
Email ThisBlogThis!Share to TwitterShare to FacebookShare to Pinterest
Labels: General Stupidity, The Death of America

Hydroxychloroquine works. The "experts" don't want you to know that.

I wonder why that is?


I will take the Yale epidemiologist over the life-long Washington D.C. Swamp Dweller every day of the week and twice on Sundays, thank you.

Hydroxychloroquine has been around for decades.  We know what it does, how it does it and why.  The fact that so many people are hysterically trying to get you to think that it doesn't work, despite the literal DECADES OF EVIDENCE we possess on it's use and function, can only be ascribed to malevolence in some form.  Either they don't want people to get better (because then they can continue the lock-down and their iron-fisted control) or they don't want to allow a cheap, well-known drug to be the primary means of helping people (they want to sell you a very expensive drug/vaccine that they and their friends can get rich from selling).

In either case, the people trying to tell you that the drug doesn't work are evil.

I can forgive the stupid and ignorant.  I cannot forgive the people who claim to be "experts", who I am told we should listen to because of their "expertise".  Their continual denial of a successful drug cannot be motivated by ignorance, because they're the "experts", right?  They KNOW STUFF!  Except, they apparently don't.  Either that, or they're evil people who want more Americans to die.
Posted by Ragin' Dave at 07:23 No comments:
Email ThisBlogThis!Share to TwitterShare to FacebookShare to Pinterest
Labels: Evil Does Exist, Get Down With The Sickness, The Death of America

Posted by Ragin' Dave at 06:46 No comments:
Email ThisBlogThis!Share to TwitterShare to FacebookShare to Pinterest
Labels: Get Down With The Sickness 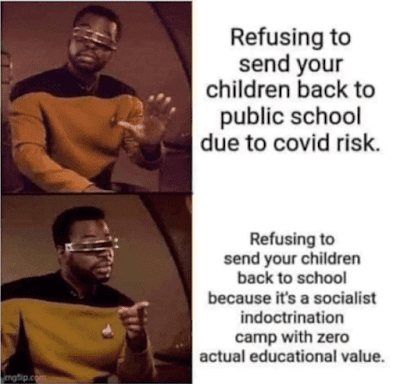 Posted by Ragin' Dave at 01:00 No comments:
Email ThisBlogThis!Share to TwitterShare to FacebookShare to Pinterest
Labels: MemeWars

Professional Sports killed themselves. It was a woke suicide.

And I'm not the only person telling the leagues to go to hell.

Sports served as a distraction from whatever else was happening in the world and our lives, now it’s the manifestation of the Democratic Party’s demands of conformity. I’m not interested in conformity. A bunch of different colored like-minded drones chanting anti-American slogans is not my idea of diversity.

If I want to be preached to, I’ll call a priest, not millionaires who play a game for a living. If I want to learn something, I’ll read a book, not seek out the “feelings” of someone in a profession known for having proxies take their classes for them. And if I want a distraction from the stress of daily life, I’ll practice self-dentistry before I give these pampered, privileged narcissists a second of my time.


I used to get baseball scores on my phone.  No longer.  I can happily live my life without being preached at by idiots and morons who are good at sportsball.

Posted by Ragin' Dave at 07:11 1 comment:
Email ThisBlogThis!Share to TwitterShare to FacebookShare to Pinterest
Labels: Fuck the Fucking Fuckers

Jerry Nadler is a grotesque caricature of a human being.

However, he's the epitome of a politician.  The only sense of calm that I get when I think about the damage that commie bastard has done to this country is when I remember that once he dies, he's going to spend eternity roasting in the fires of hell.
Posted by Ragin' Dave at 06:46 No comments:
Email ThisBlogThis!Share to TwitterShare to FacebookShare to Pinterest
Labels: Democrats

Just going to put this here

Since I don't have anything else today:  The ten Kung Flu graphs you need to see.

The hype is bullshit.  It's fearmongering at it's worst.
Posted by Ragin' Dave at 22:31 No comments:
Email ThisBlogThis!Share to TwitterShare to FacebookShare to Pinterest
Labels: Get Down With The Sickness

Woke up early yesterday, got some coffee in me, and prepared for a ride.

A little kid passed away about a week ago.  Genetic disorders, multiple, he wasn't supposed to live to the age of one.  He made it to seven.  He liked motorcycles.  His mom asked a friend if they could find some motorcycle riders to do an escort to the cemetery.  That request made it to facebook.  And that facebook post found the Motorcycle Riders of Utah, which is how I found out about it. 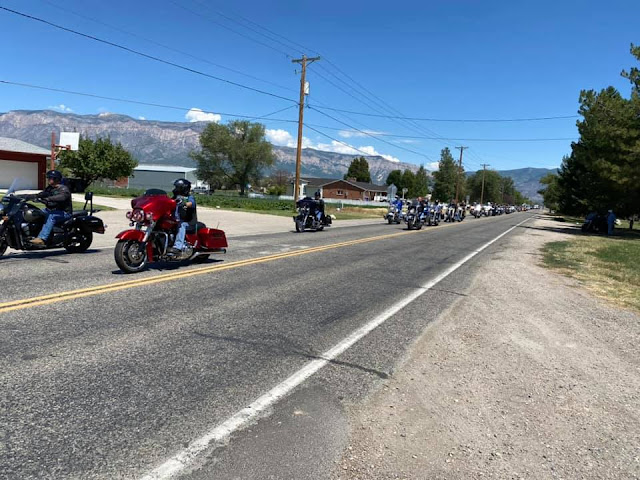 Not the greatest photo, but I'm the guy on the far left there.  About the only time you'll hear me describe myself in such a fashion.

I didn't do an exact count but there were at least 150 motorcycles that showed up to escort a little kid to his final rest.  The formation was half a mile long.  99% of us didn't know the family, didn't know little Stockton.  We just wanted to get together to do something for a grieving family.  Harleys, sport bikes, Can-Ams, one trike that used the rear end of a 67 VW Beetle.  Old folks, young folks, and everything in between.  The family came out of the funeral home and started crying all over again to see how many people showed up.  It was a good thing.

So that's where I was yesterday.  Came back a little sunburnt and dehydrated from the heat, but it was good to get together with so many different people who didn't talk politics for an afternoon.

Now to do the lawn that I ignored yesterday.
Posted by Ragin' Dave at 10:06 1 comment:
Email ThisBlogThis!Share to TwitterShare to FacebookShare to Pinterest
Labels: Personal crap
Newer Posts Older Posts Home
Subscribe to: Posts (Atom)