I would say that the FBI is continuing it's slide into irrelevance...

But in reality they've hit rock bottom and are now just wallowing around in shit while still demanding respect.  Fuck 'em. 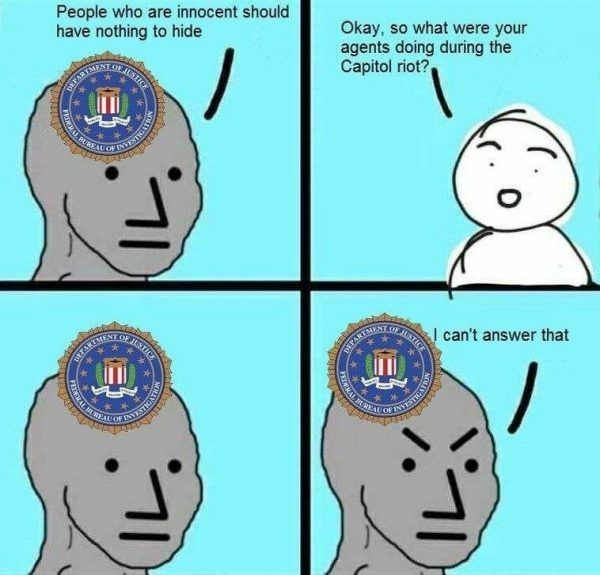 This one hit a little too close to home. 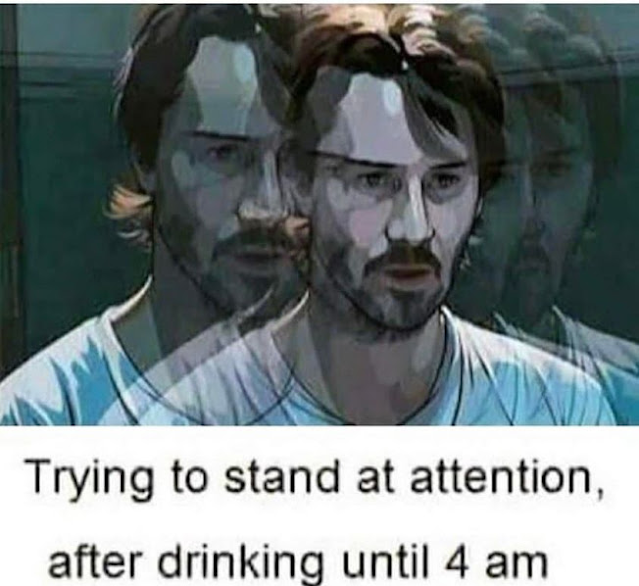 Ivermectin works, the government fucking knew it, and they lied about it

They're still lying to you about it while demanding that you get a jab that doesn't even fucking work and has long-term health implications that are unknown.

As more and more information pours out of the Project Veritas leaked military documents, there appears to be a damning section in support of Ivermectin as a Covid-19 treatment.

"Ivermectin (identified as curative in April 2020) works throughout all phases of illness because it both inhibits viral replication and modulates the immune response."

And every not-a-vax here in the USA is still under Emergency Use Authorization, which is essentially null and void if there is a TREATMENT ALREADY AVAILABLE.  Like Ivermectin.

Posted by Ragin' Dave at 17:19 3 comments:
Email ThisBlogThis!Share to TwitterShare to FacebookShare to Pinterest
Labels: The Vaccine is the Virus

Apparently I forgot to post anything today. My apologies.

Although I really haven't been sitting in front of a computer very much at all.  Been busy.

So here's something I stole. 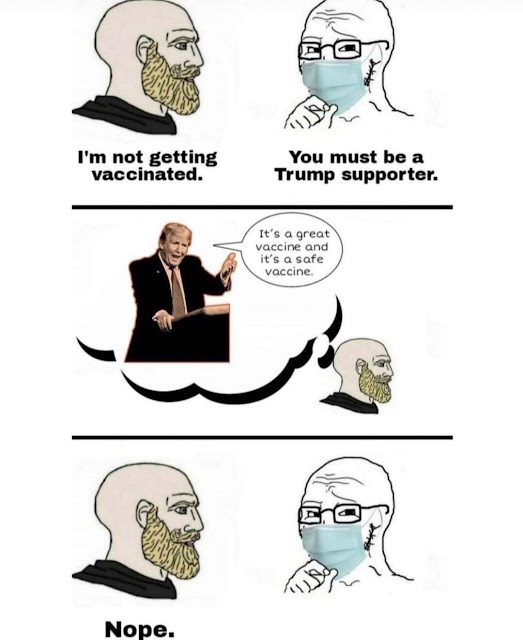 Not on this I aint.

Posted by Ragin' Dave at 17:15 No comments:
Email ThisBlogThis!Share to TwitterShare to FacebookShare to Pinterest
Labels: I'm busy so bugger off, Random Crap

The Wuhan Wopper was cooked up in a lab, using HUMANIZED MICE.  You know, the same thing they make monoclonal antibodies with.  I wonder how many fetal livers have been used for all of this?

Farzan was "bothered by" SARS-CoV-2's furin cleavage site, which he viewed as "highly unlikely" to have been created in "an event outside the lab," according to the transcriptions. The existence of a furin cleavage site, which enables the virus to become more transmissible, has been pointed to by several proponents of the lab leak theory, since the two closest known relatives of SARS-CoV-2, RaTG13 and BANAL-236, do not have the site.

Farzan claimed that a likely scenario for the creation of the furin cleavage site was the "passage [of] SARS -live CoVs in tissue culture on human cell lines (under BSL-2) for an extended period of time."

I cannot think of a more evil man in our government at this time.

Posted by Ragin' Dave at 11:42 No comments:
Email ThisBlogThis!Share to TwitterShare to FacebookShare to Pinterest
Labels: Get Down With The Sickness, Jail Is Too Good For Them, Killing is too good for them, Lying Liars who Lie

Yellow stars are too obvious. I wonder what patch they'll try to force us to wear?

The government has lists of the un-jabbed.

A federal agency debuted a new system on Tuesday designed to record and store the information of federal employees who requested religious exemptions from the Biden administration’s federal jab mandate.

According to a report by the Daily Signal, the Pretrial Services Agency for the District of Columbia, an independent federal agency designed to aid Washington D.C. courts, created the “Employee Religious Exception Request Information System” to track unvaccinated employees who ask for religious exemptions from President Joe Biden’s federal COVID-19 shot mandate.

We already know that the Democrat American Communist Party hates the Constitution, but holy hell, they're just open and honest about it now.  Are there any such lists for the Whooping Cough vaccine?  MMR?

You know there isn't.

And now ask yourself why the government is so desperate to push this jab into people's arms.  You know the answer.

Posted by Ragin' Dave at 08:35 No comments:
Email ThisBlogThis!Share to TwitterShare to FacebookShare to Pinterest
Labels: Leftist Tyranny, The Death of America, The Vaccine is the Virus

Because shit like this keeps happening.  The SCOTUS doing Biden's dirty work.

It appears that Biden has succeeded in running out the clock. The Supreme Court could have ruled that the lower courts’ stays on the mandate should continue, and yet here we are three days after the rules went into effect and justices remain silent, leaving employers with only two choices: comply with the mandate or defy OSHA, which wields enormous power and hovers like the sword of Damocles over their businesses.

The SCOTUS has pretty much turned themselves into another wing of the DNC, starting with their stamp of approval on the blatantly unconstitutional Obamacare.  I have no idea what garbage ruling will come dribbling out of that court on any given day, because all the leftists rule based on their politics instead of the actual rule of law, and the so-called constitutionalists will rule based on what blackmail the Dems have on then.

The fact that this blatantly unconstitutional mandate is being allowed to hang around is just another sign that this country is dead.

Posted by Ragin' Dave at 08:25 No comments:
Email ThisBlogThis!Share to TwitterShare to FacebookShare to Pinterest
Labels: Black Robed Idiots, The Death of America

Masks are worthless for stopping the spread of a virus, and most likely harmful to wear full time.

But you knew that already.

Look, masks can stop bacteria from flying out of your mouth.  But they can't stop the aerosols that fly out, and the cloth masks don't stop shit.  When I was in formation this weekend, every time I exhaled it just went straight out the mask.  It was cold enough that you could see your breath and where it's going.  Right through the mask without slowing down.  So how the hell can it stop a virus?

And then add on the fact that constantly wearing a mask traps bacteria right up against your mouth.  Right where you can breathe it in.

Nah, thanks.  I'm good.  I've already had it courtesy of the wife's workplace.  I'll just keep washing my hands and making sure my area is nice and clean.  I don't need to wear the magic face diaper of submission.

Posted by Ragin' Dave at 09:50 No comments:
Email ThisBlogThis!Share to TwitterShare to FacebookShare to Pinterest
Labels: Get Down With The Sickness

I fucking TOLD YOU!

Along with a whole bunch of other people.  Fauci fucking knew.  He helped fund the development of this virus, and the government covered up the fact that ivermectin and hydroxychloroquine work.

He fucking knew and he fucking lied.  How many hundreds of thousands of people could have been saved with cheap over the counter drugs that Fauci and the government denied them?

He should fucking hang for his crimes against humanity.

Posted by Ragin' Dave at 16:57 1 comment:
Email ThisBlogThis!Share to TwitterShare to FacebookShare to Pinterest
Labels: Get Down With The Sickness, The Vaccine is the Virus, Total Corruption 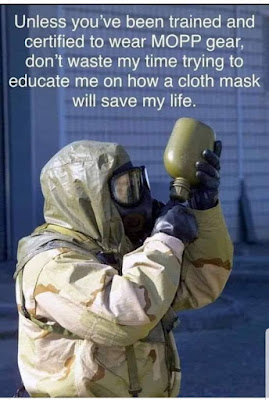 Posted by Ragin' Dave at 01:00 7 comments:
Email ThisBlogThis!Share to TwitterShare to FacebookShare to Pinterest
Labels: Get Down With The Sickness

They were picked for their politics not their brains

Justice Stephen Breyer at one point seemed to suggest outrageously that the OSHA mandate would prevent 100 percent of daily US COVID cases. It is common knowledge now that the vaccinated people can still spread the disease.

Breyer falsely claimed that 750 million people—the population of the United States is 332 million—tested positive for COVID-19 on Thursday.

“We know the best way to prevent spread is for people to get vaccinated,” said Kagan. “This is the policy that is most geared to stopping all this.”

The data suggests the opposite is true. Cities with the strictest vaccine mandates are seeing the hugest spikes in disease.

Elena Kagen was put on the Supreme Court specifically to protect Obamacare.  Sotomayor was put on the court because she was a progressive leftist and hispanic.  A "wise latina", or so she said in her own words.

Breyer might be the only liberal who was put there for actually brains, and that was a good long while ago.  All the other liberals were put there because they were going to vote based on their politics and not on the merits of any given case.  You know it, I know it, everybody knows it.

So now they're so desperate to help Drooling Joe and his puppet masters that they're making statements IN PUBLIC that should bar them from ever having any say about any matter related to the Kung Flu.  I'm talking statements that are so blatantly false that it's making people do double-takes and rub their eyes to see if supposed learned people can be so fucking stupid.

Yes.  Yes they can be that stupid.  These people exist in a bubble.  And that bubble protects them from reality.  Nobody who's actually been paying attention can make the statement that 100,000 children are hospitalized from the Peking Pox.  But Sotomayor, who is breathlessly ignorant of reality, can make that statement with a straight face and think that people will actually believe her.

Drooling Joe and his puppet masters are destroying the military

Let’s revisit military readiness for a minute. Here we have a woke military, led by a vaccinated Sec Def who just got Covid, who is all in on kicking people out for not getting vaccinated. They are ignoring the exceptionally high rate of suicides within the ranks, and instead bleating on about vaccines.

Do you want to talk about military readiness? Ask the command staff why, when people who’ve been in for 18, 20, 22 years put in for retirement are told, NOPE and are ordered to stay in for another year to two years. Remember, this is a volunteer military. Yet, while suicides are rampant and the military is kicking unvaccinated soldiers out, those who decide to retire are ordered to stay. Quite the morale booster isn’t it?

And the damage being done will go on for generations.  Because that's what happens when you attack the foundation of an organization.  You can't just toss a few patches on the wall and say that you fixed it.  You have to tear it down to the studs and fix the foundation before you can repair the damage to the walls and the roof and the sides.

I hope Lloyd Austin and Mark Milley die screaming and spend eternity in hell for what they've done to my Army.

Posted by Ragin' Dave at 05:26 No comments:
Email ThisBlogThis!Share to TwitterShare to FacebookShare to Pinterest
Labels: Military Life

And then figure out how you can be part of sticking a finger in the bastards' eyes.