Bluegrass is hard as hell y'all

I once heard a country singer, who was asked why he chose country music, respond "Well, I wanted to do bluegrass, but after a year I realized it was too damn hard.  So I switched to country."

Hoooooo-boy.
Posted by Ragin' Dave at 23:00 No comments:
Email ThisBlogThis!Share to TwitterShare to FacebookShare to Pinterest
Labels: Real Music

As for forgiveness:  Every time Jesus forgave a sinner, what was the next thing he said?

GO FORTH AND SIN NO MORE.

Which means for those people to truly be forgiven, they would have to confess their sins, make penance, and not sin again.  THAT is the Christian way.

Allowing criminals to freely enter the country so that they can force teenage girls into prostitution is not the Christian way.

It's sad that I even have to type that statement.
Posted by Ragin' Dave at 00:00 No comments:
Email ThisBlogThis!Share to TwitterShare to FacebookShare to Pinterest
Labels: anti-American, Illegal as all Hell, Immigración

News you can use

Specifically as it relates to defensive handgun use.  I know that there are still a lot of people out there who sneer at smaller calibers when it comes to self defense, but with the improvements in smaller defensive rounds, such as 9mm and .380 ACP, the difference is negligible.

What's the point of this?  Avoid mouse guns, but other than that carry the gun that you are comfortable with.  Five rounds of .380 hollowpoints in the torso is just as good as five rounds of .45 when it comes to stopping a threat.  And let's remember, the goal is not to Dirty Harry your way through a war zone.  The goal is to stop the threat and get away alive.  You want to fight a war, get weapons chambered for war.  You want to make sure you get home alive on Saturday night, you carry a gun that is concealable and accurate for you to shoot.
Posted by Ragin' Dave at 23:00 No comments:
Email ThisBlogThis!Share to TwitterShare to FacebookShare to Pinterest
Labels: 2A

The K-12 implosion summed up in a single event.

William’s grandmother, Karen Fisher, told Fox 13 she was “pretty upset” by the incident and received a call from the school’s principal and the teacher who ordered the cross to be washed off.

“I asked her if she read the Constitution with the First Amendment, and she said, 'No,'” Fisher said.


Emphasis mine.  Folks, the publik skool sistim is nothing more than daycare for feral youth and the good kids unlucky enough to be forced into these government indoctrination centers.  Find any other way of educating your children if you want them to be successful.  Homeschool them.  Private schools.  Charter schools.  Parochial schools.  But for the love of all that is good and holy, do not force your children to suffer in a public school.  There might be a few success stories coming out of publik skool, but there are far, far more examples of good kids being destroyed by their publik skool experience.
Posted by Ragin' Dave at 05:33 No comments:
Email ThisBlogThis!Share to TwitterShare to FacebookShare to Pinterest
Labels: Anti-Religion, Publik Skool

What a difference a couple decades make.

So, for the past few days I've been at Fort Hood, Texas.  Rather busy.  But the last time I had been at Hood was back in 1999, when young SP4 Dave was doing mobilization training for a little trip to Bosnia.

Can't say I ever wanted to come back after that trip.  But a couple of decades in between visits can change a place.  It's still Central Texas, which means it's flat, hot and windy.  Not my preferred climate.  But other than a month or two in the summer, this wouldn't be a bad place to live.

Oh, and every single Army base still has that one road that is the cheap, run-down, used car lot, crappy bars, strip joints and criminal enterprises drag.  That hasn't changed.  At Fort Riley, we called that place "Junction City".

Anyone who's been stationed at Riley knows exactly what I mean.

Going home today, so I get to sleep in my own bed.  The lodging on post isn't bad, but it's not mine.  It doesn't have my wife and a home-cooked meal.  Which, by the way, should be meat-free today, as we are in the season of Lent, and every Friday you should be abstaining from meat.  The Mrs. and I do that all year round, but it's even more important during Lent.  Just an FYI.
Posted by Ragin' Dave at 05:18 3 comments:
Email ThisBlogThis!Share to TwitterShare to FacebookShare to Pinterest
Labels: Musings and Meanderings

Especially today, when a college degree doesn't actually mean that you learned anything of value, like economics, or history, or Western Civilization, and universities are indoctrination centers instead of institutions of higher learning.

Here's a sentence that may surprise many readers: "In general, the most politically intolerant Americans… tend to be whiter, more highly educated, older, more urban, and more partisan themselves."

That's according to a recent article in The Atlantic, which cites the results of a survey conducted by the polling firm PredictWise. The authors were interested in gauging political intolerance—where in the U.S. are people more likely to disassociate from members of the opposite political party?—and were able to assemble a county-by-county index of American intolerance based on poll results.


As I've said before, I've had to correct the spelling, grammar and format of one-page essays from people who held a Master's degree.  A degree used to mean something positive.  Nowadays, if you hold some degree in the liberal arts, it means you're most likely an indoctrinated hard-core Marxist unable to deal with the real world in any kind of meaningful way, with the added bonus that you don't hold any kind of marketable job skills.  Oh, and you have tens if not hundreds of thousands of dollars in student loan debt.

Anyways, given that colleges and universities have been churning out good little Marxists for decades, is it any shock that people are now finding that "highly educated" whites are so intolerant?  Yeah.  Didn't think so. 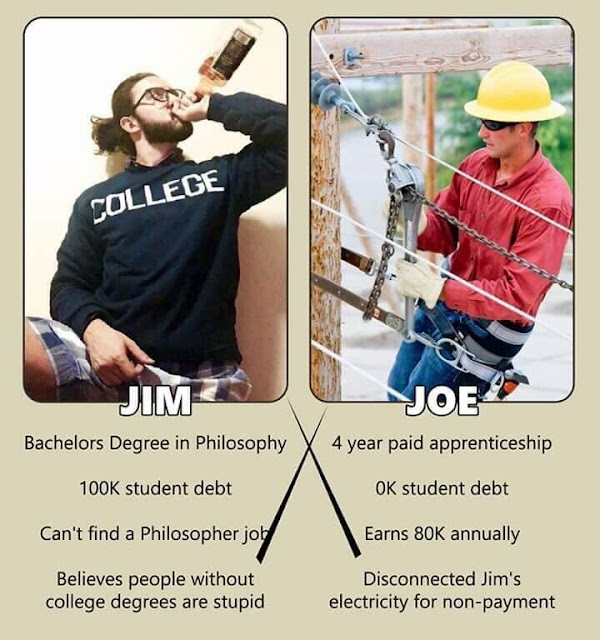 Most of the nation will set their clocks forward one hour this Sunday, and Sen. Marco Rubio is hoping to make the change stick.

The Florida Sen. is expected to reintroduce the his Sunshine Protection Act, which would make Daylight Saving Time permanent for all of the United States, several media outlets in Florida report.


Enough of this swinging to and fro.  Pick one and stick with it.  I've lived in places that didn't change back and forth, and I didn't miss it one single bit.  It just needs to go away.
Posted by Ragin' Dave at 05:55 2 comments:
Email ThisBlogThis!Share to TwitterShare to FacebookShare to Pinterest
Labels: Good News Everybody

Why we need Christianity

As an aside, Central Texas is flat.  Very, very flat.
Posted by Ragin' Dave at 22:30 No comments:
Email ThisBlogThis!Share to TwitterShare to FacebookShare to Pinterest
Labels: Must View

And this just barely touches on why a modern society that rejects Christianity is bound to fail.  As someone else pointed out a while ago, the reason God handed down the Ten Commandments wasn't that he just wanted to tell people what to do.  The Ten Commandments is simply how life works best.  A society that lives by the Ten Commandments can function together no matter who is a part of that society.  But a society that disregards them, and lives however they want to live, ends up with hostility, distrust, and violence.
Posted by Ragin' Dave at 23:30 No comments:
Email ThisBlogThis!Share to TwitterShare to FacebookShare to Pinterest
Labels: Must View

Apropos of absolutely nothing

Dickel whiskey has a batch that's aged in Tabasco barrels.

I'll be trying it out in a Manhattan later tonight.
Posted by Ragin' Dave at 16:59 No comments:
Email ThisBlogThis!Share to TwitterShare to FacebookShare to Pinterest
Labels: Deep Thots, Random Crap

And then cleaning.  I have a whole bunch of bottles that need to be sanitized and put away for the impending move.

And when I get to my next duty station, I need to throw away every single bit of cardboard and get new boxes to store the bottles, as the mold her has been so pernicious that I'm having to spray metal lockers down with bleach.
Posted by Ragin' Dave at 09:16 4 comments:
Email ThisBlogThis!Share to TwitterShare to FacebookShare to Pinterest
Labels: Mississippi
Newer Posts Older Posts Home
Subscribe to: Posts (Atom)