Spent a nice relaxing day just walking around yesterday. It's pretty damn hot here, but it doesn't have the humidity of Puerto Rico, so I'm dealing with it without too much of a hitch. Walking around yesterday, I could feel the heat, but I didn't have sweat rolling down my face. So as long as I drink enough water, I'll be OK.

Which, considering that it was around 108 yesterday, is rather odd for me. Ah well. I'll be going up into the mountains tomorrow morning, and I won't be around the internet or phone service for three days.

Which means that unless Tim or TVE manage to come out of hiding, there ain't gonna be any posts for this weekend. That's life, folks. No internet, no phones, no nothing except for wind in the trees and the crackle of a fireplace. And I'm going to love it.

In the meantime, may I suggest a few of my favorites? If you've been reading me for a while, you know who they are.

Random Nuclear Strikes, who's been posting some damn good music for you to download lately.

DANEgerus, who manages to keep track of all the dirt on the Lefties . Seriously, he's a resource on just how corrupt and evil the Left is.

And of course, Kim du Toit and the GunThing.com Forum.

You folks have a good weekend, because I sure will be doing the same.
Posted by Ragin' Dave at 10:41 No comments:
Email ThisBlogThis!Share to TwitterShare to FacebookShare to Pinterest
Labels: Personal crap

Grouchy Old Cripple in Atlanta points out a rather funny cartoon.

I've liked "Get Fuzzy" for a while, but this one had my busting a gut.
Posted by Ragin' Dave at 10:58 No comments:
Email ThisBlogThis!Share to TwitterShare to FacebookShare to Pinterest
Labels: Democrats

I ended up flying on September 11th. So that explains why I didn't post at all. One of the nice things about the flight was that when we landed in Phoenix, the flight attendant asked everyone to remain seated until the soldiers on the flight could collect their baggage and disembark to meet their families. And as the soldiers were leaving, the plane applauded.

Since I was in civilians, I sat there and clapped with the rest of them. It was nice to see them get recognized.

The irritating part of the trip was on the way to the in-law's house, there were several people on a couple of interstate overpasses with "9-11 Truth Now!" signs. The brother in law gave them the proper one-fingered salute as we drove past. Just how delusional do you have to be to think that September 11th was a government hit job?

Don't answer that. I don't want to be reminded that I live in a country were a big slice of the population is certifiably insane.
Posted by Ragin' Dave at 10:41 No comments:
Email ThisBlogThis!Share to TwitterShare to FacebookShare to Pinterest

Unfortunately, since I'm three hours ahead of my normal time, I woke up at 0500 local time. Still it was nice to go for a run before the sun came up. Agenda for today: Whatever the hell I feel like.

Yeah, that's nice. I could get used to this. Unfortunately, it's only two weeks. And thirteen more years until retirement. Heh.

I will be incommunicado for several days at various points, as I head up to the mountains where there's no internet, no phone service, and nothing to bother me. Until then, I might post, I might not. But since the purpose of this vacation is to lower my blood pressure down to somewhat normal levels, I doubt I'll be doing much political stuff.

See ya when I see ya.
Posted by Ragin' Dave at 10:37 No comments:
Email ThisBlogThis!Share to TwitterShare to FacebookShare to Pinterest
Labels: Personal crap

For every Soldier, Sailor, Airman, Marine or Coastguardsman who has lost their life fighting against terrorist bastards.

For every policeman, fireman, and rescuer who died while running into Hell to save the people trapped there.

For everyone who's lives have been touched by the evil of fanatical maniacs.

I salute you. I honor you. And I'm doing me best to make sure that there will never be another September 11th while I can do anything about it. 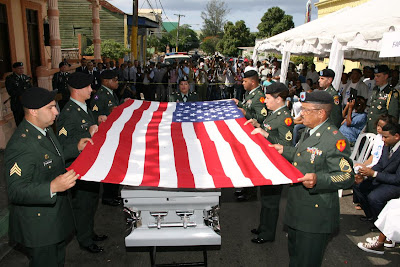 Posted by Ragin' Dave at 10:48 No comments:
Email ThisBlogThis!Share to TwitterShare to FacebookShare to Pinterest

That's been me the past month, in case you haven't noticed. And you know what? I need a break.

And I'm taking one, starting tomorrow.

I'm taking two weeks of leave, going up to meet my wife in Phoenix, and spending two weeks doing as little as possible. Now in all honesty, I'm probably still going to be working my ass off, since I know that people will be calling me, emailing me, yada yada yada. "Dave, where's this paperwork? Dave, what about this? Dave, So-and-so called, and you need to call him back." Whatever. At least I won't be here, in the office, dealing with them on a daily basis.

So I guess you could call that a vacation. But "leave" is the more appropriate term. I'm leaving. For two weeks. I expect to be contacted, emailed paperwork, and otherwise still engaged with my job.

I may or may not post much. It all depends on how I feel. And that's what it's going to come down to. "Do I want beer, or whisky? Do I want eggs or pancakes? Do I want to post, or do I want to continue laying in bed?" You know the drill.


So you've been warned.
Posted by Ragin' Dave at 19:03 No comments:
Email ThisBlogThis!Share to TwitterShare to FacebookShare to Pinterest
Labels: Personal crap

The sweeter side of Mexico

My Brother in Law(BiL) has been talking about Mexican Sweetbreads almost since I got here. We *finally* made it to the shop.

It was a small hole-in-the-wall bakery with maybe 20 feet of counter space. We went in the afternoon and they were still bringing out new sweetbreads. The American pastries have nothing on these. They are not too sweet, very tasty and despite everyones insistence otherwise I am sure quite laden with fat. I have no way of knowing for sure since I was told they do not share the recipes with *any one*. This is a long time established business with original recipes from Mexico.

But, I digress, these are AWESOME. The Raging_Dave will get his treat soon enough. If you are in the Phoenix area, I *highly* encourage you to stop in. Ordering by pointing is acceptable. I don't know how much English they speak as my BiL did the ordering. But, he says they are better than *any* of the shops in LA!

Anybody got a Mack Strong jersey?

I may need to buy one when I'm up in the States next week.

Are you still fans of Matt Hasselbeck and Mack Strong after they visited President Bush last week in Bellevue? Or have their political leanings turned you against them?

The Seahawks quarterback and fullback gave the 43rd president a No. 43 jersey with his name on it at a $1,000-a-plate fundraiser for Rep. Dave Reichert at the Hyatt.

Reichert is a stand-up guy. And Mack Strong is one of the best players you'll never hear about.

Maybe in really red Republican states, it would not have been a big deal. But Washington is a blue state, and deep, deep Democratic blue in King County. So objections were raised, and Hasselbeck heard them and read them. He got nasty voice mails, e-mails and text messages.

“I had no idea,” Hasselbeck said.

One guy told him: “I hate you, I’ll never wear your jersey, I’ll never like the Seahawks again.”

Welcome to the real Seattle, Matt. Filled with nutcases, seething hatred of anyone to the Right of Joseph Stalin, and more vitriol than you can shake a stick at.

I like Matt Hasselbeck, think he's a good guy, but Mack Strong should be one of the faces of the Seahawks. He's played for the Seahawks for his entire NFL career. He should retire as a Seahawk. He's been the starter for most of his career. He's the consumate team player, who cares more about winning games than personal records. And he's built like a brick shithouse. Shaun Alexander should be kissing Mack Strong's ass every damn Sunday, because it's Strong who opens up huge gaping holes for Alexander to dance through.

I need to buy a jersey of his. Show some love for an outstanding fullback and a genuinely good person.
Posted by Ragin' Dave at 12:22 No comments:
Email ThisBlogThis!Share to TwitterShare to FacebookShare to Pinterest
Labels: Election 2008, Moonbats on Parade
Newer Posts Older Posts Home
Subscribe to: Posts (Atom)