A Rape of Democrats 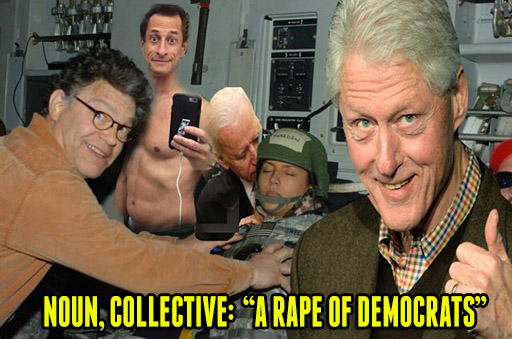 It's like a Murder of Crows, or a Business of Ferrets.  It just fits so perfectly.....
Posted by Ragin' Dave at 06:06 No comments:
Email ThisBlogThis!Share to TwitterShare to FacebookShare to Pinterest
Labels: Heh, Politics

US Intel Agencies have become both politicized weapons, and a sad joke

They're politicized weapons to be used by Democrats against their enemies, and a sad joke because they cannot do what they're actually supposed to do.

There are too many coincidences for it to be just bad luck. Some journalists are belatedly realizing they are living through the aftermath of the Big Bang. A huge strike happened without them even being aware of it and the scale of it is boggling. The Obama administration failed to detect the rise of the Islamic state, was surprised by the Russian invasion of Crimea and Putin's intervention in Syria, did not see the rapid development of Kim's nuclear arsenal and, publicly at least, ascribed the assault on the Benghazi consulate to a video -- and as the New Yorker points out, were even blindsided by Russian election interference openly happening on Facebook.


But they sure were great at spying on US journalists that the Obama regime didn't like!  Golly, could they ever wiretap those reporters!  And Trump's campaign office!  Because if you want to get to the bottom of things, you throw wiretaps on a political nominee's phones!

Stopping the hack of the Office Of Personnel Management, where over 20 million service-member's personal information was stolen?  Not so much.

Along with the worst political class in history, we have the worst intelligence agencies in our country's history.  And the fact that the two are inexorably merged is the reason for the latter.
Posted by Ragin' Dave at 05:53 No comments:
Email ThisBlogThis!Share to TwitterShare to FacebookShare to Pinterest
Labels: Complete Incompetence, Governmental Insanity, Total Corruption

And it's starting to become clear even to GOP stalwarts.

The secret behind McConnell’s reputation has been his ability to evade responsibility for suboptimal outcomes. He does so by blaming others when things do not turn out as expected while simultaneously taking credit for ensuring that they did not turn out even worse.

Most of the time, that meant blaming former President Barack Obama and then-Senate Majority Leader Harry Reid, D-Nev., for the fact that Senate Republicans did not accomplish more in specific legislative debates, such as those over the debt ceiling, government funding, and Obamacare.

While leaders have always blamed their adversaries for their shortcomings, McConnell’s willingness to blame his fellow partisans sets him apart. For example, he routinely assigned blame to Sen. Jim DeMint, R-S.C., DeMint's Senate Conservatives Fund, and the candidates it supported in Republican primaries in 2010 to explain why the GOP failed to capitalize on the Tea Party movement and retake the majority that year. In doing so, McConnell also conveniently overlooked the early support DeMint gave to rising GOP stars such as Sens. Pat Toomey, R-Pa., and Marco Rubio, R-Fla.

And after Republicans finally won a majority in the 2014 elections, McConnell regularly defended the lackluster bills he brought to the floor and passed with largely Democratic votes by pointing to what he portrayed as the obstinate refusal of conservatives such as Sens. Mike Lee, R-Utah, and Ted Cruz, R-Texas, to compromise.


At this point the GOP is probably going to lose control of both Houses of Congress in 2018, and it is entirely due to Mitch McConnell being a big-government, anti-conservative shitstain, who has spent the past decade doing his utter best to destroy the Tea Party movement and Trump voters while coddling the Democrats.  He is a pathetic waste of oxygen, who has one, uno, singular victory under his belt as the Senate Majority Leader, despite having GOP control of the House, Senate, and Oval Office.  Gutless, spineless, clueless and hopeless, he careens from one complete failure to another, always blaming someone else for his total inability to stop kissing Democrat ass and stabbing GOP voters in the kidneys.  He only punches to the Right, and Virginia is the perfect example of what happens under his "leadership".

Mitch McConnell needs to retire, go home, and spend the rest of his life letting the rest of us try to repair the damage he's done.
Posted by Ragin' Dave at 17:48 No comments:
Email ThisBlogThis!Share to TwitterShare to FacebookShare to Pinterest
Labels: Dumb as a fucking stump, McConnell must go, The Stupid Party

You never know just how much crap you have

Until you have to move.  And then it's "Why the hell did we keep that?  What IS that?  Where did that come from?"  Needless to say, the Mrs. and I have dumped several boxes of random stuff at Goodwill, and even more boxes into the dump.  That doesn't count the bonfires we've had from paperwork that we didn't need, but had PII on it.

And that doesn't count the stuff we've sold off, like a massive plate glass table that was just too big for the house, along with the six chairs that went with it.  I'd say we're down at least 1000 pounds from when we got here.

Why in the hell did we have so much crap?
Posted by Ragin' Dave at 06:43 4 comments:
Email ThisBlogThis!Share to TwitterShare to FacebookShare to Pinterest
Labels: Personal crap

Don't know why Day by Day is so big

I might have to delete the old code and put whatever new code in there.  Meh.  Give me a bit.
Posted by Ragin' Dave at 06:38 No comments:
Email ThisBlogThis!Share to TwitterShare to FacebookShare to Pinterest
Labels: Blog Stuff
Newer Posts Older Posts Home
Subscribe to: Posts (Atom)