Credit where credit is due

What [it] basically does is require the State Department to issue the permit for Keystone XL within 60 days, unless President Obama explicitly says the pipeline is not in the national interest and kills it (that would definitely not be good for him to do).

It also tells State to allow construction to go ahead while it works with Nebraska to resolve any remaining environmental or routing issues. The governor and legislature there are on board with getting a new route to allay any concerns.

So we got the Keystone language, Dems got a 2 month extension of their payroll tax cut and unemployment insurance, but the cost is fully offset (with spending cuts) so it doesn’t add to the deficit.

The Republicans in the House and Senate have basically set it up so they either get the pipeline, or Obama goes down looking even worse and they have something solid they can pin on him.  That's good politicking there.
Posted by Ragin' Dave at 08:19 No comments:
Email ThisBlogThis!Share to TwitterShare to FacebookShare to Pinterest
Labels: Oh HELL yeah, The Good Guys win one

And I can do what I want to do!  I'm on nobody's schedule but my own!

*faint*
Posted by Ragin' Dave at 07:45 No comments:
Email ThisBlogThis!Share to TwitterShare to FacebookShare to Pinterest
Labels: Personal crap

If Tim Tebow were black, not a single one of his attackers would have uttered a peep.  Not.  A.  Fucking.  Word.
Posted by Ragin' Dave at 05:48 1 comment:
Email ThisBlogThis!Share to TwitterShare to FacebookShare to Pinterest
Labels: "Modern" Life, Racism?

I think that the reason so many people hate Tim Tebow is because of his religion, not anything he's done on the field.

Oh, and while he might not be the greatest QB to ever play the game, he doesn't turn the ball over much, and his team is WINNING games.  What are the Broncos now since he took over?  6-1?  Yeah.  Leading the AFC West?  Yeah.  So he's not Aaron Rodgers.  So what?  He protects the ball and gives his team a chance to win every single game.  You think the Indianapolis Colts wouldn't like some of that right now?  They'd jump on that chance like a starving dog on a fresh t-bone steak.

So can anyone else tell me why so many people hate Tim Tebow?  Because from where I sit, it's his religion, not his skill set, that is setting so many people off.  He's a reminder of what a decent Christian is, and people can't stand that.

Anybody?  Prove me wrong.
Posted by Ragin' Dave at 06:12 5 comments:
Email ThisBlogThis!Share to TwitterShare to FacebookShare to Pinterest
Labels: "Modern" Life, Religion

Seen on my walk 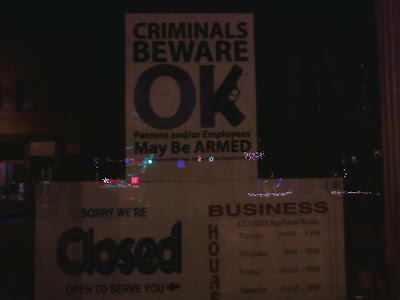 Click for bigger.  I was walking the dog and having my cigar when I did a double take at one of the shops downtown.  There have been a few of the "NO FIREARMS ALLOWED!!!!!!1111!!1!" signs popping up around town ever since Wisconsin finally stopped it's illegal infringement of the 2nd Amendment.  It seems there's at least one shop in town that has no problem with the 2nd Amendment and people's rights.

Sorry about the quality, I took the picture with my phone.
Posted by Ragin' Dave at 05:52 1 comment:
Email ThisBlogThis!Share to TwitterShare to FacebookShare to Pinterest
Labels: 2A, Oh HELL yeah

But there's freezing rain outside.  So I'm torn between my desire to run, and my knowledge that if I hit a patch of ice, which is currently covering 70% of the ground, I could wind up breaking my leg and not run for months.

UPDATE:  Went running anyways.  It was fine, until I hit the soggy dirt trail, and then it was like running in quicksand.  Still, better than sitting on my ever-expanding fat ass.
Posted by Ragin' Dave at 08:44 No comments:
Email ThisBlogThis!Share to TwitterShare to FacebookShare to Pinterest
Labels: Personal crap

I don't care how cold it is

I hated Kansas for this very reason.
Posted by Ragin' Dave at 19:22 No comments:
Email ThisBlogThis!Share to TwitterShare to FacebookShare to Pinterest
Labels: Musings and Meanderings
Newer Posts Older Posts Home
Subscribe to: Posts (Atom)