Stats on gun crime that you should know.

You can go read the rest.  In fact, you should go read it right now, because the next time some gun-grabbing shitweasle tries to whine about teh CHILLUNS you need to beat them with a clue-by-four.  Publicly.  I doubt you will change their mind, but the people around who are listening in might have their minds changed. 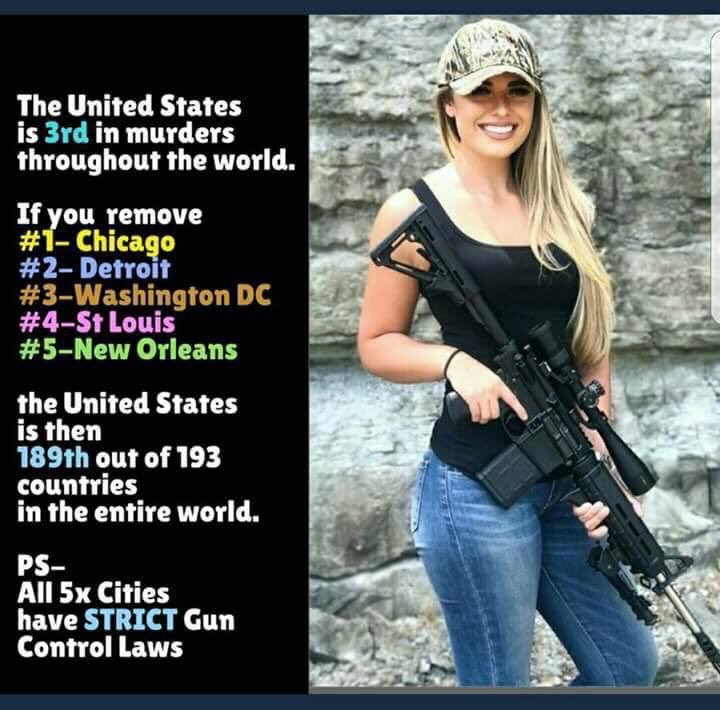 We don't need gun control, we need Democrat control.
Posted by Ragin' Dave at 01:00 No comments:
Email ThisBlogThis!Share to TwitterShare to FacebookShare to Pinterest
Labels: 2A, Criminal Behavior

Corrupt Democrat doesn't have to face any questions from the media

An investigation by Minnesota’s Campaign Finance and Public Disclosure Board into Rep. Ilhan Omar (D-MN-05) found she violated campaign finance laws dating back to when she served a single term in the State House of Representatives from 2016-2018.


The Somalis that have occupied the Twin Cities have a history of fraud and crime.  It should be no shock that when you elect someone from a group of corrupt criminals, you will uncover evidence of their corruption.  But since the corrupt criminal is A)  Female, B)  Black, and C)  Muslim, there's not a single chance in hell that the media will dare ask any hard questions about her.

One rule for corrupt criminal followers of a pedophile prophet, and another rule for conservatives.  This is how the next Civil War advances.
Posted by Ragin' Dave at 09:45 No comments:
Email ThisBlogThis!Share to TwitterShare to FacebookShare to Pinterest
Labels: Nucking Futs, The Media is not your friend, Total Corruption

Why yes, the Mueller investigation WAS a witch hunt

Now that Mueller has ended his probe finding no election collusion between the Trump campaign and Russia, 10 witnesses and targets of his sprawling, $35 million investigation agreed to speak with RealClearInvestigations because they are no longer in legal jeopardy. They include several people who became household names during the two-year probe – including George Papadopoulos, Carter Page and Roger Stone – as well as lesser-known figures whose lives were also upended and finances imperiled when they came into Mueller’s crosshairs.


Anyone with half a brain knew that the Mueller investigation was a load of flaming horse shit.  But the damage done to people was real.  And the real criminals, Hillary Clinton, Barry O'Bumblefuck and his corrupt administration, are walking around free, laughing their asses off.

Posted by Ragin' Dave at 01:00 No comments:
Email ThisBlogThis!Share to TwitterShare to FacebookShare to Pinterest
Labels: Government Thugs, Total Corruption

Words cannot express what it means.  Hell, pictures barely do the job.

So I'm just going to be silent for a moment.
Posted by Ragin' Dave at 08:10 No comments:
Email ThisBlogThis!Share to TwitterShare to FacebookShare to Pinterest
Labels: THIS is America

When a tool has fulfilled it's purpose and is no longer needed, you discard the tool

That's a good warning to all the little proto-marxists pushing for Marxism in the government.  When their useful life has expired, they'll be discarded.  Just ask what Uncle Joe did to the Useful Idiots on the USSR.

The tools in question, who are also undoubtably Marxist, are the American Universities that churn out garbage degree after garbage degree without actually forcing their students to learn anything other than hysterical SJW propaganda and bullshit.

Last month at a conference in London, the distinguished British philosopher Sir Roger Scruton added his voice to this chorus when responding to a questioner who complained of the physical ­violence meted out to conservative students at Birkbeck University.

There were two possible responses to this situation, Sir Roger said. One was to start competing institutions, outside the academic establishment, that welcomed conservative voices.

The other possibility was “get rid of universities altogether.”

That response was met with enthusiastic applause.

Were I a business owner that dealt with matters not related to the hard sciences, I would consider a liberal arts degree a negative on any prospective applicant.  Any degree that ends in "Arts" or "Studies" can be tossed right in the trash can, as you can be sure that the holder of that degree is so soaked in Marxist indoctrination that you couldn't get a decent worker out of them if you tried.  The American University system at this day and age pumps out Marxist drones with no real skills or talents, loaded down with a house-worth of debt, who couldn't be trusted to do the right thing if you paid them a million dollars.

Sure, we need doctors to go to school.  But for every doctor we produce, we churn out thousands of English majors that can't find a job.  For every engineer, there are thousands of people getting a Gender Studies degree.  When the actual, useful degrees being awarded are less than 50% of the population, you're paying too much good money for trash.

On a side note, I can see the online universities overtaking the brick-and-mortar schools.  Unless you're a virtue-signaling elitist or SJW, why pay six figures for a degree you can get for $20,000 or less?
Posted by Ragin' Dave at 09:56 No comments:
Email ThisBlogThis!Share to TwitterShare to FacebookShare to Pinterest
Labels: Higher Mis-education, Modern Life

So, it looks like that no matter what, I'm going to have a commute of 45 minutes to an hour on the road.  The closer to get to Salt Lake City, the more the rents go up, and quite frankly the Army doesn't pay me enough to live close to where the unit sits.  Not unless I want to dump all my crap and move in to a studio apartment.

And before I do that, I dump all my crap and move in to an RV.  At least at the end of the tour I'd have a paid-off RV to live in, rather than paying buttloads of cash to live surrounded by hipsters and college students in a shoebox with the sound-proofing of a tin can.

I figure that six months out of the year I'll be on the motorcycle, so that'll be OK on the gas bill.  Luckily, no matter where we live there are job opportunities for the Mrs. much closer, so her gas-guzzling truck won't eat up the paycheck.

Still, I'm glad this is my last stop.  I'm a little tired of moving around and trying to find a house in some of the most craptastic real estate markets.
Posted by Ragin' Dave at 19:09 No comments:
Email ThisBlogThis!Share to TwitterShare to FacebookShare to Pinterest
Labels: Personal crap

Sooooo, I don't know if anyone has lived in or around Salt Lake City in the past.  I can recall living here when I was a long-haired hippy child, but that was in the 90's.  One of the Chaplains I worked with bought a house here in the mid-2000's, and his mortgage in this current day and age wouldn't get you half a duplex.

The Ragin' Mrs and I, and yes with house hunting in this market she is the RAGIN' MRS, have been trying to find a decent rental house.  Now, keep in mind that I'm stationed in Salt Lake City.  I cannot afford to live in Salt Lake City.  So we are looking an hour away from my duty station, and we're still batting 0.000 right now.  I think you could rent out a cardboard box on the sidewalk for at least $500, and have five applications by the second day it was on the market.

Good Lord.  I cannot wait to retire, and then move to where I want to live.  Of course, there's no guarantee that I can afford anything by that point.
Posted by Ragin' Dave at 21:17 5 comments:
Email ThisBlogThis!Share to TwitterShare to FacebookShare to Pinterest
Labels: Military Life, Personal crap

Makes sense to me

The most sexually satisfied group of people are conservative religious heterosexual people.


1)  Conservative religious heterosexual couples probably worry less about if their partner is cheating on them, given that we look at marriage as a Sacrament and not just a legal document.

2)  We never have to try to figure out if our spouse is a man today, or if xir is a woman for the morning but not the night, etc etc etc.  Also, since we are not generally married to such people, our spouse is generally not bat-shit crazy.

3)  I don't read romance novels, but I'm pretty sure that there's not a lot of steamy books written about limp-wristed soy-boys who always cave in to their girl's demands.  But men who believe in a hierarchy, and that they're the head of the family?  Strong, masculine men?  Yep.

Yes, two of those three are somewhat tongue in cheek, but I'll point out that all good humor has a bit of the truth in it.  I'm also willing to bet that conservative, religious heterosexual couples have higher satisfaction because they haven't been polluted with modernist, Marxist feminist bullshit that causes so many of the problems in a relationship, and a good relationship leads to good sex.  That might sound backwards, but it's the truth.  The more effort you put into making your relationship with your spouse solid and successful, the better your sex life will turn out to be, because the both of you are actively working to please your partner, and not being greedy shits.

So, in order to have mind-blowing orgasms, you need to get you some old-time religion.  Booyah, baby!
Posted by Ragin' Dave at 01:00 No comments:
Email ThisBlogThis!Share to TwitterShare to FacebookShare to Pinterest
Labels: Gimme that Old Thyme Religion, Musings and Meanderings
Newer Posts Older Posts Home
Subscribe to: Posts (Atom)