The Soldier arrives in Santo Domingo today. We'll be on Honor Guard, and then the Ceremony tomorrow.

I hope you'll all understand if I don't write another post until Monday.

The Amnesty Bill isn't dead yet, but it's gasping for air. Good. We need to keep our hands wrapped around it's neck until the thing is dead and gone. We don't need an 800 page tome of laws that will promptly be ignored as soon as the ink is wet. We need two things, and two things only:

It really is that simple. And the government has failed to do it for decades, until we have millions upon millions of illegal aliens living in America and cities ignoring the laws that are written. Since the government has proven beyond a doubt that they can't or won't do a damn thing, why should we trust them to follow ANY of the Amnesty Bill they wanted to pass?

Kill the Bill. Kill it, burn it, shred the ashes, and then bury them in a septic tank somewhere.

Still more Paris Hilton in the news. Gag. Please, Lord, make it stop. Why in the name of all that is holy are people so fixated on a skank who's only claims to fame are that A) her daddy is rich, and B) she made a sex tape that got out, and then showed how embarrassed she was about it by flashing every bit of genitalia possible in public.

The sooner that we don't care about Paris Hilton or anyone like her, the better.

That's it for today. See you all next week.
Posted by Ragin' Dave at 09:36 No comments:
Email ThisBlogThis!Share to TwitterShare to FacebookShare to Pinterest
Labels: "Modern" Life, Congressional Stupidity, Personal crap

See what you miss when you're away?

In fact, that day, the police was so effective they even prevented a suicide bomber from entering the building. We heard the boom, and as if on cue, RPG and small arms fire. The Marines of the 2/6 infantry unit grinned as they pulled on their equipment and took positions, but in reality, the Iraqi police had prevented a major suicide attack. There was, however, one victim—the suicide bomber.

So, how did the death of a sole suicide bomber become the Wall Street Journal headline of "Suicide Bombing in Fallujah Leaves 25 Dead, 50 Wounded"? To be fair, NPR, CBS, Sky News, and CNN all parroted the same numbers, as they rushed to report something—anything! The answer is a 20-minute helicopter away in Baghdad. Where the majority of "reporting" is done from the Green Zone.

Bottom line - if you get your news on Iraq from a newspaper, you're being lied to. Period. Matt Sanchez, who posted this report, also left a comment:

The reporting is, indeed, atrocious. The Washington Post report about the Green Zone running out of food, or members of the military not being able to blog were flat out lies.

I'm currently one of FIVE embeds in all of the Al Anbar Province. A province roughly the size of South Carolina.

Emphasis mine. I guess it's just easier to slander the troops and push a political agenda like a good little whore than get out and, yannow, REPORT THE FACTS. There's simply no reason to pick up a newspaper for actual news. You would be better off hitting the tipjars of Sanchez, or Micheal Yon, or Bill Roggio, or any of the other private citizens who are over there doing the job that the newspapers are too worthless and gutless to do.

Added without comment via DANEgerus - High Crimes and Misdemeanors

1) Freely admitted that they covered up some of Saddam Hussein's most horrific crimes in exchange for "access."

2) Co-produced a piece on "Operation Tailwind" from the Viet Nam war, during which they alleged that the US used poison gas.

3) Accused the US military of "targeting" journalists for killing in Iraq.

1) Rigged a GMC pickup to explode, using model rocket engines, to support their story that the trucks could explode in a routine crash.

1) Aired a documentary on the suffering of Viet Nam veterans without disclosing (or, even noticing) that five of the six veterans profiled had never actually served in Viet Nam.

(Far, far, far too many to mention, starting with the white wash of Stalin's atrocities in the Soviet Union and including publishing identifying information on CIA aircraft, and other highly classified information. Toss in their hypocrisy in championing the "leaking" of information when it suits their purpose, but demanding the heads of whoever "outed" Valerie Plame by any means necessary except actually asking journalists who told them what.)

I could go on, but that ought to be more than enough.

Compared to that, what the hell has Fox News done that merits such vitriol? I know it's usually a bad idea to -- as Bill O'Reilly likes to say -- "justify bad behavior by citing other bad behavior," but in this case it seems that Fox is being punished for sins that pale in comparison to others' misdeeds.

It's all about the political agenda, folks.
Posted by Ragin' Dave at 17:08 No comments:
Email ThisBlogThis!Share to TwitterShare to FacebookShare to Pinterest
Labels: Iraq, The Media is not your friend, WoT

I was remiss yesterday

I was so damn busy that I forgot to sit down and remember my history.

Sixty-three years after the Greatest Generation began the charge into hell, our soldiers, sailors, Marines, and airmen are still going strong. Still fighting against insane lunatics. The tactics may have changed, the enemy may be swarthy and dark instead of blond haired and blue-eyed, but the mentality we fight, the arrogant superiority and quest for world domination - those are the same. And we're still fighting against it. For all our sakes, I hope we continue to fight against it.

Sixty-three years ago, some Sergeant was doing just what I'm doing now - going through the drills, practicing, in order to render honors to a fallen comrade. He had different medals on his chest - perhaps a German Campaign medal, maybe a Pacific Campaign ribbon. But the rank on our sleeves will be the same. It's the Non-Coms who perform the ceremony. Officers can give a speech, but NCO's fire the 21 gun salute. NCO's carry the casket, NCO's fold the flag. Some un-named Sergeant and I, separated by over six decades, but we're doing the same exact things. The very same motions and drills. And for the very same reason:

To honor a fallen comrade. And the Soldiers we honor fell for the same reasons - to fight a mentality that would enslave the world if it could.

God bless those that fell sixty-three years ago. It is from them that we take the inspiration we hold today.
Posted by Ragin' Dave at 10:49 No comments:
Email ThisBlogThis!Share to TwitterShare to FacebookShare to Pinterest
Labels: "Modern" Life, Personal crap

Finally got online today. Wrote an email to the Raging Mrs. Reply to an email from a friend. Then hit 4RWWS.

The soldier hasn't returned to Santo Domingo yet. Paperwork issues. That should be settled at some point, and then they'll fly him here, where we'll pick him up. Honor Guard, most likely 24 hours. Then the ceremony. He's going to be cremated, so there won't be a funeral in the common sense of the word. From what I understand, we'll be bringing his casket right out into the street. The police are going to shut off traffic for a couple of blocks, and there will be people everywhere.

It's going to be interesting, to say the least.

Leeeeee-vin' On a Jet Plane

Headed out to Santo Domingo this afternoon.

The Army never promised me a boring life.
Posted by Ragin' Dave at 10:17 No comments:
Email ThisBlogThis!Share to TwitterShare to FacebookShare to Pinterest

Yet another Hash Picture 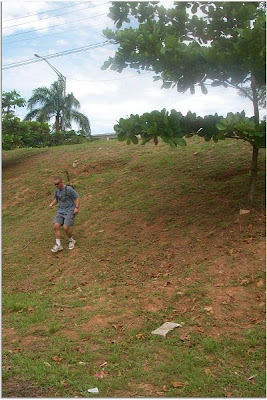 That's me, hauling ass through Puerto Rico. That backpack looking thing is my Camelbak, which I aways carry on a Hash. Otherwise I'd have heat stroke within a mile. Running in PR during the afternoon is a bitch sometimes. 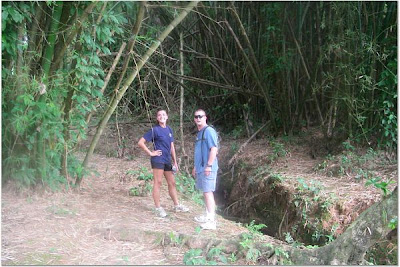 That, my friends, is what we call "The Shiggy". What, you thought we only ran on roads? Unfortunately, that picture looks a lot better than it smelled.

If I have a chance, I'll be posting a pic a day if I can. That's IF the hotel has internet. And that's a big IF.
Posted by Ragin' Dave at 20:29 No comments:
Email ThisBlogThis!Share to TwitterShare to FacebookShare to Pinterest
Labels: Personal crap

Micheal Moore says there's no terrorist threat in America! How can this be?

Three people were arrested and one other was being sought Saturday in connection to a plan to set off explosives in a fuel line that feeds John F. Kennedy International Airport and runs through residential neighborhoods, officials close to the investigation said.

Captain Ed points out that this isn't just a homegrown plot, this had ties all over the world. Read his post, because I honestly don't know what I could add to it.
Posted by Ragin' Dave at 05:32 No comments:
Email ThisBlogThis!Share to TwitterShare to FacebookShare to Pinterest
Labels: WoT

I'm going to be printing these off and sending 'em to my congresscritters. Money talks. And my money is staying in my wallet until Congress understands that they get elected to represent us, not their own bank accounts.
Posted by Ragin' Dave at 04:45 No comments:
Email ThisBlogThis!Share to TwitterShare to FacebookShare to Pinterest
Labels: Immigración
Newer Posts Older Posts Home
Subscribe to: Posts (Atom)