Gonna be kind of a long day, and it started early.
Posted by Ragin' Dave at 13:38 No comments:
Email ThisBlogThis!Share to TwitterShare to FacebookShare to Pinterest
Labels: Personal crap

"What religion are you?" *BLAM*

The gunman at an Oregon college targeted his victims based on their faith.  From his online presence he's a Black Lives Matters supporter

Oh, and he described himself as a "conservative Republican".

As a side note, I'm having a hard time mustering up too much emotion over the fact that a transplanted Californian walked into a gun-free, victim-disarmament zone and killed people who meekly stood their like lobotomized sheep.  With the exception of one Army vet, who charged the gunman and got shot seven times for doing so, and the rest of the cowardly fucks still stood there and DID NOTHING.

This sort of helplessness is trained into people.  We have raised multiple generations of sheep, and we're now getting our reward.
Posted by Ragin' Dave at 08:37 3 comments:
Email ThisBlogThis!Share to TwitterShare to FacebookShare to Pinterest
Labels: Evil Does Exist

Taken on my way to work

Hey dude, look at my car!  The wheels are cambered, which means I can go fast or something like that!  Yeah, man!  My car ROCKS, dude! 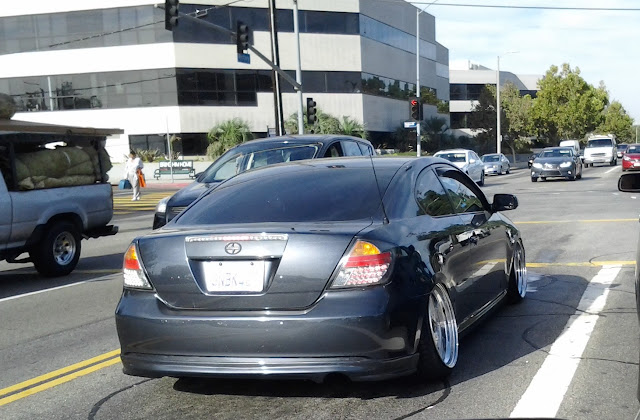 Every time I see a car with the wheels cambered at that extreme an angle, I automatically assume that the driver is a douchebag of the highest order.  I haven't been wrong yet.  It's like slapping a giant sticker on your car that says "WARNING!  Driver has a massive attitude problem caused by his tiny little penis!"
Posted by Ragin' Dave at 09:21 4 comments:
Email ThisBlogThis!Share to TwitterShare to FacebookShare to Pinterest
Labels: Modern Life

From a book I read

I blow things up, therefore I am, even if someone else suddenly isn't.

Man, I need to put that on a T shirt.
Posted by Ragin' Dave at 09:34 No comments:
Email ThisBlogThis!Share to TwitterShare to FacebookShare to Pinterest

The Reason he leads in the polls

As the man says:

The average American feels that the country has a sucking chest wound and everybody but Dr. Trump is telling him to treat it with a couple of aspirin.

Trump is not a Conservative.

He is a Murder Weapon.

The GOP is the victim.

We good now?
Posted by Ragin' Dave at 09:35 No comments:
Email ThisBlogThis!Share to TwitterShare to FacebookShare to Pinterest
Labels: Election 2016

Things that make me see red

When I'm browsing the news, and the ads on the side of the page are in Spanish.

Can we just dump this entire city into the ocean and walk away?  Please?
Posted by Ragin' Dave at 09:01 No comments:
Email ThisBlogThis!Share to TwitterShare to FacebookShare to Pinterest
Labels: Fuck Los Angeles
Newer Posts Older Posts Home
Subscribe to: Posts (Atom)