Are you enjoying that $4 a gallon gas?

Go ahead and thank Obama, who promised us this sort of thing back when he was on his endless campaign.  I'm certain he's going to investigate all those speculators and investors, because that will keep the spotlight off of him and his actions that have driven costs higher.

In the meantime, tell me what plans you've had to cancel because you couldn't afford to drive there.  And prepare yourself for $6 a gallon come July.
Posted by Ragin' Dave at 07:56 No comments:
Email ThisBlogThis!Share to TwitterShare to FacebookShare to Pinterest
Labels: Domestic Enemies, Obama, Total Corruption

If your asscannon sprays your discharge like grapeshot all over the toilet, to include the seat where others would normally sit, perhaps a change of diet is in order?

Dear lord.......  What the hell is wrong with people?  Do they have some type of digestive disorder?
Posted by Ragin' Dave at 17:33 3 comments:
Email ThisBlogThis!Share to TwitterShare to FacebookShare to Pinterest
Labels: Nucking Futs

Otter issued an executive order imposing a state prohibition on receiving federal funding for or otherwise implementing the Affordable Care Act. The order directs state agencies not to establish new programs, promulgate rules or accept federal funding to implement the health care reform law, in effect for more than a year.

A couple of points that I just wanted to link to today - one is from the American Thinker, and it references the point that S&P downgraded it's outlook on the USA to "negative", which is just a fancy way of saying that they don't think we'll be able to pay our debts, or at least not as certainly as we could a year ago.  The second link is Doug Ross, and he points out that government handouts now outweigh tax revenues.  The economy continues to tank.  Add it all together, and you have a nasty recipe for some civil unrest.  This country has created a parasitic class of people who suck their living from the government teat.  What happens when that teat runs dry, folks?

I think we saw that end result in Greece, and other places in Europe.

Both the Ragin' Mrs. and I knew of people who's entire life goal was to get on disability and live off the government checks for the rest of their lives.  THAT WAS THEIR GOAL.  Oh, and during this time they were about and about living their lives unimpeded by any real, actual injury.  They went to parties, they did their activities, they just did not work.  Nope, that was MY job.  Still is.  That is unsustainable.  It was unsustainable in Roman times, and it's just as unsustainable now.  There's no magic formula that allows a government to blow through trillions of dollars for bread and circuses without the financial crash at the end.

In the end, the result is going to be the same as any group that spends more than it makes - financial failure.  To the Left, that may be their goal.  To conservatives and patriots?  We should be fighting this with everything we've got.  Or you could just wait until the country falls apart and form your own little fiefdom.  Tell me how that works out for ya.
Posted by Ragin' Dave at 05:24 No comments:
Email ThisBlogThis!Share to TwitterShare to FacebookShare to Pinterest
Labels: The Death of America

Did you think I was joking?

You know, about all that global warming that got dumped on us? 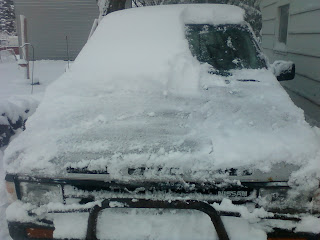 I took this picture this morning with my cell phone as I was clearing the global warming off my truck.  By the way, I was wrong, it was SIX inches of global warming.  And it's April 20th.

Yeah, it takes guts to live in Wisconsin.
Posted by Ragin' Dave at 18:13 No comments:
Email ThisBlogThis!Share to TwitterShare to FacebookShare to Pinterest
Labels: Personal crap

I need to go shovel off the four inches of global warming that got dumped on us yesterday.

All that global warming needs to hurry up and get here.
Posted by Ragin' Dave at 04:22 No comments:
Email ThisBlogThis!Share to TwitterShare to FacebookShare to Pinterest
Labels: Global Warming Hoax

The oh-so-tolerant Left, making sure that the people's voice will not be heard.  Call it what it is.  Anti-democratic.  Fascist.  Anti-American.  And then make damn sure you hang that label on the people responsible, the Democrat American Communist Party of Wisconsin.

This is what the right are up against. It may be time to start behaving like you are at war, because whether you have woken up or not, you are at war, and the left are your enemies. You can’t count on the common decency of your opponents – they don’t even know what decency is, let alone what used to be termed ‘common decency’.

Operating in the current political climate, you tell me no one involved in the recall petition thought to secure these documents let alone their computers? You folks better wake up or else you will find yourselves being eaten by that wolf. I am really concerned about the naivete of some of our conservative brethren. We are in a war for the very soul of this nation and if any of you do not understand nor recognize how to fight against this evil, we are lost.

Big news coming for me personally

Details are still getting worked out, but some big changes are looming just ahead.  Once I have more info, I'll post it.
Posted by Ragin' Dave at 05:35 No comments:
Email ThisBlogThis!Share to TwitterShare to FacebookShare to Pinterest
Labels: Personal crap

If you haven't read it yet


I had a discussion the other day with some relatively intelligent folks about social security. The idea of cutting benefits or moving the retirement age shocks them. “How unfair! But I’ve paid into this my whole life!”

Yep. You sure did. You got lied to and screwed over by evil political opportunists. Deal with it. I’m just shy of 40. I know that I’m not ever going to see a dime of any of the money I paid into Social Security.  FDR’s pet program was garbage when the average old person died a couple of years after retirement and the ratio of workers to retirees was 40 to 1.  How in the hell is it supposed to work when retirees are expected to live for TWENTY YEARS and there’s only a handful of people paying in for every one getting a check?

Read the whole thing.  It's one damn fine rant about the state of the nation's fiscal policy, with suggestions than politicians won't ever follow but need to have tattooed on their forheads.
Posted by Ragin' Dave at 05:17 No comments:
Email ThisBlogThis!Share to TwitterShare to FacebookShare to Pinterest
Labels: Linky Love, Must Read

Standing up to unions works

And how.  How does a deficit of $31 million sound for the next budget cycle, after facing billions in deficit from the past few years?  I know that there are a few folks who support the unions, but in Wisconsin the unions are the problem, not the solution.
Posted by Ragin' Dave at 06:15 No comments:
Email ThisBlogThis!Share to TwitterShare to FacebookShare to Pinterest
Labels: Oh HELL yeah
Newer Posts Older Posts Home
Subscribe to: Posts (Atom)