And hitting the ground running.  Gonna be busy all day today, and then maybe tomorrow I can get some stuff done on my terms.

Still going to be busy as hell, but at least it'll be on some things that I can determine, rather than having someone say "Get this done!"
Posted by Ragin' Dave at 05:06 No comments:
Email ThisBlogThis!Share to TwitterShare to FacebookShare to Pinterest

The St. Louis USO has chili cheese hot dogs.  And lots of snack foods in bags that totally whup the butt of potato chips.

Still can't wait to get home.
Posted by Ragin' Dave at 10:31 No comments:
Email ThisBlogThis!Share to TwitterShare to FacebookShare to Pinterest
Labels: Personal crap

Doctors abandon insurance, go with cash only business model.  I truly wish I could find one of these places around where I live.  I'd have the Mrs. go there rather than trusting on Tricare.  Tricare, being a government insurance plan, pays out almost nothing to the doctors, and hence is accepted in fewer and fewer places.  Medicare is being accepted in fewer and fewer places.  This isn't an "accident".  The government cannot run a massive program with any kind of success.  They just can't.  Name one government program in my lifetime that has done the job it was given up to standard and without going over budget - you can't.  It.  Does.  Not.  Exist.

I'm honestly happy to see doctors turning away from insurance, because too many people today don't even understand what they're paying for their health care.

While the cash-only model may please doctors, some question whether it's good for middle- and low-income people.

Kathleen Stoll, director of health policy at the consumer advocacy group Families U.S.A., didn't want to speak directly to either Petersen's or Nunamaker's practice, as she didn't know the specifics of each.

But in general, she fears that doctors who switch to a cash-only model will drive away the patients who can't afford a monthly membership fee or thousands of dollars for an operation.


I don't know, how bad will it be when people are paying thousands of dollars per month for health insurance that isn't accepted by any doctors around them, Ms. Stoll?  Hell, people on Obamacare are already finding it hard to get a doctor to accept their plan, which I think is just awesome.  The sooner Obamacare fails the better.
Posted by Ragin' Dave at 05:18 No comments:
Email ThisBlogThis!Share to TwitterShare to FacebookShare to Pinterest
Labels: Government Health Care will kill you

Gosh, what are the odds?

That an anti-male, lunatic, unhinged feminist screeching about "male privilege" and "patriarchy" would be a fat, ugly lesbian?

This kind of idiocy cannot be natural.  It has to be learned.  It has to be enforced.  Human beings are not this stupid and delusional by nature.
Posted by Ragin' Dave at 04:52 1 comment:
Email ThisBlogThis!Share to TwitterShare to FacebookShare to Pinterest
Labels: Feminazi, Modern Life, War of the Sexes

This is what they do in their countries

Obama wouldn't mind seeing this on American streets at all.  It would give him even more reasons to call patriotic Americans a bunch of racist haters.
Posted by Ragin' Dave at 09:14 2 comments:
Email ThisBlogThis!Share to TwitterShare to FacebookShare to Pinterest
Labels: Islam, Must View

Your Healthcare of the Future!

When ever you encounter a brainless Leftist drone (redundancy alert) who lurves them some Obamacare, just remind them that Government Healthcare will kill them.  And nobody will do a thing about it.

Government watchdogs at the Department of Veterans Affairs wrongly closed a years-long investigation into failures at a Wisconsin VA hospital and attempted to prevent a report about the probe from going public, the Senate Homeland Security Committee has concluded.

The alleged cover-up was detailed in a report released Tuesday by the committee, which has looked into allegations of veteran mistreatment at the Tomah, Wis., VA hospital for the past 16 months.

This WILL be coming to a government-controlled hospital near you in the near future.  Count on it.
Posted by Ragin' Dave at 06:17 No comments:
Email ThisBlogThis!Share to TwitterShare to FacebookShare to Pinterest
Labels: Government Health Care will kill you

I get it.  I really do.  He wasn't my last pick, but he wasn't my first pick either.  Trump isn't conservative.  I get that as well, but I would respond with the fact that the GOP isn't really conservative either.  When your last two Presidential Candidates are John "Fuck You, Conservatives!" McCain and Mitt "I Invented Obamacare First!" Romney, you cannot claim to be a party of conservative principal.

But let me just lay this out for you.  If you turn up your nose and vote third party, Hillary wins.

It's that simple.  Not voting for Trump means that Hillary wins.  And while this country can survive a Trump presidency, we cannot survive a Hillary presidency.  It would be over.  Done.  This country would be dead, with just a few twitches left from random neural impulses firing here and there.  We might look like the US of A, but at that point it's all over but the shooting.

So make your choice.  Choose wisely.

Of all tyrannies, a tyranny sincerely exercised for the good of its victims may be the most oppressive. It would be better to live under robber barons than under omnipotent moral busybodies. The robber baron's cruelty may sometimes sleep, his cupidity may at some point be satiated; but those who torment us for our own good will torment us without end for they do so with the approval of their own conscience.

No matter what, every democrat, living or dead, is going to vote for Hillary Clinton.  They don't care if she's corrupt.  They don't care if she's a felon.  They hate America as much as she does, and they will vote for her in droves.  Add to that all the cheating and voter fraud that will be ongoing.  We need everyone to vote against her, to make sure she never gets into office.  That means voting for Trump.

I understand that you don't like Trump.  I don't like him either.  But I will not allow that diseased communist bitch, Hillary Clinton, grab the brass ring.
Posted by Ragin' Dave at 06:04 2 comments:
Email ThisBlogThis!Share to TwitterShare to FacebookShare to Pinterest
Labels: Election 2016

Got to work today, after spending all of last week away.  Sat down in my boss's office to give him the sitrep.  He looked at me and said "So, you ready for tomorrow?"

I had forgotten that we had to jet off once again.

Thank God my wife is used to the military.

On the other hand, I really, really, REALLY owe her a nice dinner when I get back.

Also finally ordered a shield for the bike. 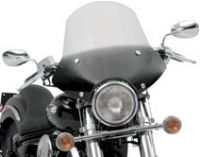 And it'll look much like that once it's installed on mine.  It's smaller than a standard touring shield, but that's not too big a deal.  As long as I don't have to fight to stay upright like I did a couple weeks ago.  It'll get here Friday, and I figure I can install it sometime next week.
Posted by Ragin' Dave at 16:03 No comments:
Email ThisBlogThis!Share to TwitterShare to FacebookShare to Pinterest
Labels: Personal crap

Mansions of the Lord

Posted by Ragin' Dave at 10:50 No comments:
Email ThisBlogThis!Share to TwitterShare to FacebookShare to Pinterest
Labels: Real Music

I'm not such a great wordsmith that I think I should be writing an epoch every year for this day.  Rather, I would re-post or re-print the words of those who's skill at writing far outweigh mine.  Therefore, I'm posting what I think is one of the best memorial speeches ever given, although it was given before the concept of Memorial Day came into being.

Four score and seven years ago our fathers brought forth on this continent, a new nation, conceived in Liberty, and dedicated to the proposition that all men are created equal.

Now we are engaged in a great civil war, testing whether that nation, or any nation so conceived and so dedicated, can long endure. We are met on a great battle-field of that war. We have come to dedicate a portion of that field, as a final resting place for those who here gave their lives that that nation might live. It is altogether fitting and proper that we should do this.

But, in a larger sense, we can not dedicate -- we can not consecrate -- we can not hallow -- this ground. The brave men, living and dead, who struggled here, have consecrated it, far above our poor power to add or detract. The world will little note, nor long remember what we say here, but it can never forget what they did here. It is for us the living, rather, to be dedicated here to the unfinished work which they who fought here have thus far so nobly advanced. It is rather for us to be here dedicated to the great task remaining before us -- that from these honored dead we take increased devotion to that cause for which they gave the last full measure of devotion -- that we here highly resolve that these dead shall not have died in vain -- that this nation, under God, shall have a new birth of freedom -- and that government of the people, by the people, for the people, shall not perish from the earth.

As an aside, the Bing homepage today shows a Guard at the Tomb of the Unknown Soldier.  The Google homepage?  Not so much.  Just a tiny little flag and a yellow ribbon at the bottom.

Now, given that they gave an entire page to a drawing of an admirer of Osama bin Ladin, you think they could have done something just a little bit more for the day where we remember or fallen military.  But no, not Google.

Fuck those pieces of shit.

Posted by Ragin' Dave at 10:20 No comments:
Email ThisBlogThis!Share to TwitterShare to FacebookShare to Pinterest
Labels: Musings and Meanderings

Got my hands in a beehive today

There's a bee keeper who doesn't mind teaching new folks.  I got to help check for queens, look at honey production, and check overall hive health on a few hives before the rain set in.

I doubt I'm going to keep bees here because I don't want to set everything up just in order to move in a couple of years, but knowledge is power, and knowing how to take care of bees will help me when I eventually retire and start setting up orchards and gardens and everything else that I can have when I don't have to move every three years.

Plus, this guy just likes having someone to teach.  So I get to benefit from that.
Posted by Ragin' Dave at 16:59 No comments:
Email ThisBlogThis!Share to TwitterShare to FacebookShare to Pinterest
Labels: Personal crap
Newer Posts Older Posts Home
Subscribe to: Posts (Atom)