The Mrs and I did some errands this morning, and then it was off for a ride.  Did the T-CLOCS inspection.  My tires were getting a little worn, but I've already ordered a new set and made the appointment to get them replaced.

Took off up multiple canyon roads.  Had a great time.  Got cold, way up in the mountains surrounded by snow.  Came down the mountain, got warm again.  Lots of twisty roads.

Stopped for a rest and bathroom break.  Came back to the bike.  Doing a once-over.  Saw the rear tire.  Defecated myself. 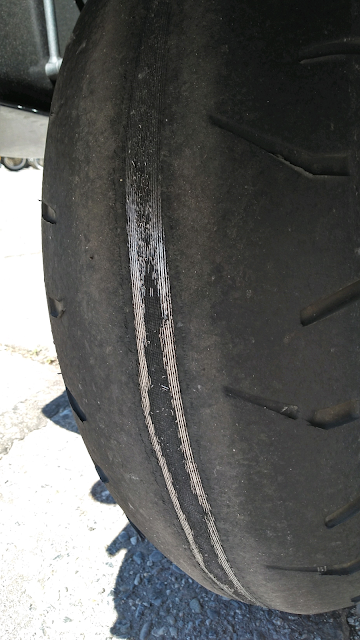 It sure as shit didn't look like that this morning when I was adding a few pounds of pressure.

Near as I can tell, my daily commute, which is mostly interstate, did enough damage to the middle of the tire that going up in elevation and digging into the curves damn near became a catastrophic event.  I rode it nice and gentle to the shop that's doing the tire replacement, handed the key over, and said "I just rode the good off of my tires."

If this is true

And that is an "if", but if it's true, Cheney needs to be dumped faster than a ten dollar whore.

The letter published in the Washington Post contained a stark warning from 10 Defense Secretaries from both parties.

Posted by Ragin' Dave at 21:41 4 comments:
Email ThisBlogThis!Share to TwitterShare to FacebookShare to Pinterest
Labels: The Stupid Party

Out the door early today

Posted by Ragin' Dave at 05:44 No comments:
Email ThisBlogThis!Share to TwitterShare to FacebookShare to Pinterest
Labels: Personal crap

At this point, you can almost tell who voted for who by who's screaming for masks and who is sick of them.

Accordingly, experts conclude that, based on the science, “you don’t need to wear a mask outdoors….Discarding pointless practices like outdoor masking and obsessive ‘hygiene theater’ would make the continuing necessary precautions, including indoor masking, easier to accept.” Nonetheless, the COVID cult, led by the masked-even-when- on-a-Zoom-call President Joe Biden, perpetuates the fiction that, in the words of a CDC publication entitled How to Protect Yourself & Others, “everyone 2 years and older should wear masks in public.” Even though WHO guidelines dispense with the mask requirement outdoors so long as a three-foot distance from others is maintained, the CDC calls for masking and maintaining a six-foot distance, even for people who are fully vaccinated. This is obedience for obedience’s sake.

Of course, if this were actually a free country we would be giving the moneyed idiots who run it the double-barreled middle fingers.  But we're not a free country.  Not anymore.

Posted by Ragin' Dave at 07:21 2 comments:
Email ThisBlogThis!Share to TwitterShare to FacebookShare to Pinterest
Labels: The Death of America

Drooling Joe the Chinese hand puppet is getting worse

On Wednesday, Joe Biden promoted the Restaurant Revitalization Fund, which, with a price tag of $28.6 billion, seeks to help restaurants hurt by the COVID-19 pandemic. While speaking, Biden appeared to struggle with reading his prepared remarks off the teleprompter, getting words wrong, running words together, and slurring his speech.

It’s brutal to watch him struggle with basic English. But you can’t really look away.

There's a reason his puppet masters made sure Drooling Joe was hiding in his basement during the election - because if people had seen more of this, they wouldn't have voted for him.  Well, the ones who actually DID vote for him, which wasn't enough for him to win anyways, which is why multiple states had to stop counting votes long enough for more votes to be manufactured.

Posted by Ragin' Dave at 07:00 No comments:
Email ThisBlogThis!Share to TwitterShare to FacebookShare to Pinterest
Labels: Biden is a puppet

Was going to talk about this today

We're no longer a republic, we're living in an oligarchy.

But I slept like absolute shit last night, so you can just read it without any commentary.

The American republic was founded in 1776-89 by the people at large, to serve the general interest by mixing the power of sheer numbers with that of states, and with that of a unitary presidency. But over the last century, the increasingly homogeneous set of people who run the republic’s institutions took power out of the hands of the people’s elected representatives pretty much at all levels, and have governed in their own interest rather than in the general population’s. Nobody voted for this, on any level.

On the contrary: the exercise of coercive powers by and for self-selected elites who claim to know better and who validate one another is the very negation of the constitutional republic within which Americans have lived since 1776. It is oligarchy.

Barry Jug-ears O'Bumblefuck weaponized the Federal Government in ways that would have made Woodrow Wilson and FDR blush with shame.  It's not just an oligarchy, it's a tyrannical one.

Posted by Ragin' Dave at 07:22 No comments:
Email ThisBlogThis!Share to TwitterShare to FacebookShare to Pinterest
Labels: The Death of America

Finally got the package in the mail.  There was a snafu caused by me using a cashier's check, but it got sorted out, and how I'm bona fide!  Is that the right context for "bona fide"?  Eh, whatever, it works.
If you don't know about the Iron Butt Association (which is what the Saddlesore 1000 is part of) you can check it out at the link.  I've done one, and despite me saying that I was one and done, I'm kinda itching to do it again.
Posted by Ragin' Dave at 07:46 4 comments:
Email ThisBlogThis!Share to TwitterShare to FacebookShare to Pinterest
Labels: Personal crap

If this is what the CIA is putting out as a recruiting video, they're finished as a serious agency

The only thing that this "cisgender millennial with generalized anxiety disorder" is a threat to is the law-abiding citizens of the USA.

People who address themselves in the third person are all sorts of stable.

The CIA has a specific type of employee it's trying to recruit: Woke Millennial Basket-cases who hate normies and want revenge on them.

Gee, I wonder why they'd be interested in that type of mental case with a grudge.

I wonder what enemies and illegal combatants they're currently plotting against.

When you announce yourself as "intersectional" and go down the intersectional box checking list, but then claim that your life is not a box checking exercise?  Uh, honey, that's all you are, and you just announced it to the world.

As Don Jr. puts it:  China and Russia love the new CIA.

Posted by Ragin' Dave at 07:20 No comments:
Email ThisBlogThis!Share to TwitterShare to FacebookShare to Pinterest
Labels: The Death of America

It's all the same people running the show.

Anita Dunn, a senior adviser to Joe Biden, was interviewed by CNN’s Jake Tapper Sunday morning. On State of the Union, it was painfully clear that she is out of practice in doing cable news Sunday morning shows. The interview was a hot mess, to put it bluntly.

Dunn looked to be ill-prepared to answer some really basic questions, questions she surely should have known would arise. She’s no political neophyte, she was acting White House Communications Director from April through November 2009 in the Obama administration.

As I recall, she got booted after praising Mao Zedong as her favorite "philosopher".  I guess shooting political enemies in the back of the head and murdering over fifty million people counts as a "philosophy" in the Democrat Party, which only lends credence to my multiple statements that Democrats hate you and want you to die.

And this Marxist bint was the "communications director", but if you pull up the speech where she's all fan-girl of Mao and his murderous regime, you'll see she's barely able to get through a speech because she's chewing on her tongue, or at least that's what it looks and sounds like.  Hey, in order to communicate, you have to be able to actually, ya know, COMMUNICATE, right?  But hey, she loves her some Red China Leader, so she's cool with the DNC.  And now she's back in the White House, pulling the strings.  Drooling Joe and the Commie Ho are nothing more than a front.  They're not in charge, and they never were.  There's not a chance in hell they ever actually were going to be running things, and I'm pretty sure they knew it.

Drooling Joe might be a puppet, but the people pulling his strings aren't stupid.  They're just evil.  And they hate you.  And they want you to die.  Act accordingly.

Posted by Ragin' Dave at 07:46 No comments:
Email ThisBlogThis!Share to TwitterShare to FacebookShare to Pinterest
Labels: Biden is a puppet, Democrats hate you and want you to die

The Mrs. and I did a funeral ride on Saturday.  A gent here died after a car turned left in front of him while he was on his motorcycle.  His family is from Pocatello, Idaho, and that's where they wanted him buried.  So we escorted him home.  About a half-mile worth of bikes in formation from Ogden up to Pocatello, about 150 miles.  Formation rides are always a bit interesting, and a half-mile formation at 80 mph is more so.  But it was a good experience, and the family was damn near in tears after seeing the escort he had.  It was a good thing.

Sunday was work around the house that needed to be done, and hey, I finally had time to do it.  Get the swamp cooler up and running.  Redo the garden beds, which included pushing them back about six inches.  Clean, clean, clean.  Cook lunch.  More work on the garden.  Come inside just as a thunderstorm breaks directly above us, spitting massive rain and tiny hail.  I do love the smell of rain after a hot day.

I pretty much avoided the news.  Which is probably a good thing.  But now it's back to the grindstone, so off we go!

Posted by Ragin' Dave at 07:16 No comments:
Email ThisBlogThis!Share to TwitterShare to FacebookShare to Pinterest
Labels: Personal crap

Fr. Altman: You cannot be Catholic & a Democrat. Period. (Part I)