The Culture of Death

Buck up, little campers - this is coming to America once Obamacare is fully implemented.


One doctor has admitted starving and dehydrating ten babies to death in the neonatal unit of one hospital alone.

Writing in a leading medical journal, the physician revealed the process can take an average of ten days during which a  baby becomes ‘smaller and shrunken’.

The LCP – on which 130,000 elderly and terminally-ill adult patients die each year – is now the subject of an independent inquiry ordered by ministers.

The use of end of life care methods on disabled newborn babies was revealed in the doctors’ bible, the British Medical Journal.

Earlier this month, an un-named doctor wrote of the agony of watching the protracted deaths of babies. The doctor described one case of a baby born with ‘a lengthy list of unexpected congenital anomalies’, whose parents agreed to put it on the pathway.

Parents and care teams are unprepared for the sometimes severe changes that they will witness in the child’s physical appearance as severe dehydration ensues.
‘I know, as they cannot, the unique horror of witnessing a child become smaller and shrunken, as the only route out of a life that has become excruciating to the patient or to the parents who love their baby.’

Once Obamacare and it's death panels take over, you'd be better off taking your relatives out back and putting a bullet into their brain, rather than entrusting them to the tender care of government-mandated death panels.

Luckily, most progressives don't own guns, which means that they'll get to feel the full effect of Obamacare.  Since they voted for it, I can only hope they experience every last flaw, and have that experience drawn out for as long as possible.

!!!!!
Posted by Ragin' Dave at 12:42 No comments:
Email ThisBlogThis!Share to TwitterShare to FacebookShare to Pinterest
Labels: Government Health Care will kill you

Free Ice Cream Machine is down

I slept in today, loved it.  Took the dogs running.  Now I'm about to have a kick-ass brunch of home-make waffles, home-made bacon and eggs.

After that, I'm going outside to smoke a cigar and read the news.

I really don't have much to blog about other than that.
Posted by Ragin' Dave at 12:32 No comments:
Email ThisBlogThis!Share to TwitterShare to FacebookShare to Pinterest
Labels: Personal crap

Up in the morning, early

C'mon all you military folks, sing along!

So, since I'm up long before I want to be, here's a picture the Ragin' Mrs. snapped of me a while ago.  I was catching up on sleep on the couch, and the dogs decided they would join me. 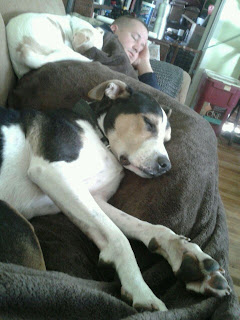 The little one will take any opportunity he can to crawl on me and go to sleep, while the big one can go from ferocious guard dog to "Let's cuddle!" in 0.5 seconds.

Posted by Ragin' Dave at 04:27 No comments:
Email ThisBlogThis!Share to TwitterShare to FacebookShare to Pinterest
Labels: Personal crap

That corrupt, mentally diseased Jesse Jackson, who won re-election in Chicago despite being locked up in a nuthouse for half a year and not campaigning, will be replaced by the person he bumped in the first place, who is not only corrupt but a kiddy-diddler.

Oh, yeah, I know there's supposedly an "election" to be held before the pre-selected choice takes his seat, but give me a fucking break here.  It's Chicago.  The choice has already been made, and Reynolds will be in Congress.

Considering how the Chicago Machine's choice just spent the past four years raping the future generations of this country in order to fund his Marxist pipedreams, I think it's a rather fitting choice.
Posted by Ragin' Dave at 09:26 1 comment:
Email ThisBlogThis!Share to TwitterShare to FacebookShare to Pinterest
Labels: Filthy sub-human parasites, Leftist Tyranny, Politics, Sick in the Head, The Death of America

Why I would never get married in this age

Because the "modern" woman, as evidenced by modern culture here and here, point to a woman that is an immature, harpy-ish, self-entitled, arrogant, ignorant whore.

Lena Dunham and Sandra Fluke are nothing more than cheap whores, demanding that men pay for their free goodies.  And neither of them have the kind of personality that would make me want to be around them for more than five seconds.

Can you think of anyone who better represents the America of 2012 than Ms. Fluke? I can’t.

She’s got it all: The “Generation Cupcake” inadequacy (“So what if she didn’t earn the award — give it to her, anyway!); the “Occupod” sense of entitlement (“Somebody should be buying my condoms, and it ain’t gonna be me!”); and, of course, the liberal detachment from reality (“There’s a war on women! We’re being oppressed! Just ask Hillary Clinton, Condi Rice and Oprah!”).

Then there’s the economic angle. One could argue that the icon of the failing Obama economy is the college grad with a worthless degree under his arm and a bed in his mom’s basement.

Time magazine gives us Sandra Fluke, with a bachelor’s degree in (no joke) Feminist, Gender, & Sexuality Studies, no marketable skills, and still on the academic track, living on the largess of others.


If I were an unmarried man in this day and age, I would run away from "modern" women as fast as I could.
Posted by Ragin' Dave at 09:34 No comments:
Email ThisBlogThis!Share to TwitterShare to FacebookShare to Pinterest
Labels: LoonyLefties, Modern Life, Moonbats on Parade

You know, where you plug one nostril and blow out the other?  I have it down to an art form.  I can do it and not miss a stride.

But when you can feel the snotball exit your nose, and hear it splat on the ground, you have to stop and see what the hell just came out of your sinuses.  It was almost the size of a kitten, I swear, and I think I saw it move under it's own power at least once.

I hate LA air.  Smog, dust, and pollen.  I have black boogers half the time.
Posted by Ragin' Dave at 09:11 2 comments:
Email ThisBlogThis!Share to TwitterShare to FacebookShare to Pinterest
Labels: Personal crap

Cooked up some bacon this morning.  The house smells awesome.  The dogs are vibrating.  And I'ma gonna eat me some bacon.

And yes, the Ragin' household has a can in the fridge for bacon drippings.  Of COURSE we do!  What kind of barbarians would willingly throw away bacon drippings?
Posted by Ragin' Dave at 08:57 3 comments:
Email ThisBlogThis!Share to TwitterShare to FacebookShare to Pinterest
Labels: foodie

This is a bookmark for me

Because I don't have time tonight to listen and watch, but tomorrow I'm marking out a block of time to watch this.  And I'm posting this on Tuesday.

You should do the same.
Posted by Ragin' Dave at 07:00 No comments:
Email ThisBlogThis!Share to TwitterShare to FacebookShare to Pinterest
Labels: Must View

When I said it, I meant it as satire

But you can't do satire these days.

Their Lord, God, Savior and King.  The Marxist Messiah.  The Teleprompter Jesus.

And then they scream about the separation of church and state, the fucking kool-aide guzzling tools.

Posted by Ragin' Dave at 19:00 No comments:
Email ThisBlogThis!Share to TwitterShare to FacebookShare to Pinterest
Labels: Dirty Fucking Hippy Losers, Dumb as a fucking stump, Fuck the Fucking Fuckers, Narcissistic Fucking Prick, The Death of America

Or for that matter, it doesn't equal experience either.  Ever heard the phrase "Book Smart, Street Stupid"?

For my money, I agree with Bookworm:

These high earning, upper echelon people didn’t embrace Leftism because their intellectual analysis inexorably led them to it.  Instead, they embraced Leftism because their smarts mean they’ve been steeped in the Leftist stew for infinitely longer than the average American who didn’t go on to a higher degree.

These same people also remind me that academic smarts do not correlate with real life intelligence.  I have no doubt that these people are good lawyers, doctors, CEOs, ambassadors, etc.  What they’re trained to do, they do well.  Outside of their sphere of expertise, however, they’re remarkably naive and intellectually incurious.

Here’s my example for today:  In the wake of the election, I’ve heard five Obama supporters — all of whom also voted for all the California Democrats and for all the California taxes — complain that their taxes are going up next year.  The cognitive dissonance is almost painful.  All of them consistently embrace big spending — and, therefore Obama and his fellow Democrats — because they’ve been trained to believe that the spending on welfare, entitlements, and “select” businesses is a “good thing.”  This is a knee jerk belief.  They will always vote for these “good things,” and for the candidate who promises them.  And they will ignore the rhetoric about higher taxes (Obama was not shy about targeting them as the next big source of funding), and they will ignore fiscal cliffs, and they will ignore plain old common sense that says that someone must pay the piper.


A while ago I had a raging debate with a lawyer who was also a Socialist.  Hard core, progressive Socialist, and for all his education he consistently refused to look at the historical record of socialism.  And this was while Greece was rioting and sliding further into debt, and all he could say was "Oh, that won't happen here".

Really?  Ever been to Watts?  South Central?  Compton?

The common thread between all the Obama-bots, both rich and poor, is their economic illiteracy.  They literally cannot fathom economic reality, and so they vote according to the pipe-dreams fed to them by the National Socialist Democrat Worker's Party, who continues to buy their votes with the money of the productive half of America.

That ought to scare the hell out of you.  And it's part of the reason that I think this country is doomed.  You cannot fix an economic problem when a majority of people think the economy can be fixed with unicorn farts and money trees.
Posted by Ragin' Dave at 09:25 3 comments:
Email ThisBlogThis!Share to TwitterShare to FacebookShare to Pinterest
Labels: Death and Taxes, Dumb as a fucking stump, Marxist Economy

Getting what I asked for

So last week I ordered my monthly supply of cigars, and included it that was a bundle of A.J. Fernandez "over-runs".  They're seconds, or perhaps they are over-runs, but they're unlabeled and you don't know which particular line of cigars they're from.

However, they're from A.J. Fernandez.  So, they're ManOWar, or Diesel, or La Herencia Cubana or any other number of cigars.  All of them good, and most of them powerful.  If you don't like a strong cigar, these things will blow your head off.  I happen to like strong cigars from time to time, so I ordered a bundle of toros.

So they came in the mail on Friday.  Into the humidor to get happy.  Lit one up just a minute or two ago, and this thing has to be from one of his stronger lines.  This is what I imagine a pre-Castro Cuban cigar to be; not just a palate pleaser, but you can feel it in your belly.