And one of the best pieces of equipment the military has ever come up with, period.

The Army issued me a sleeping bag system that includes three different bags that you can mix and match depending on the climate and weather.  It's a wonderful system.  But I put it in it's stuff sack and left it in the duffel bag, because I had the poncho liner.  I would just lay it out, put my neck pillow down, lay a picture of my wife next to the pillow, and that would be all I needed.  They gave me an actual mattress when we were in Camp Phoenix, so I just laid it out on that. 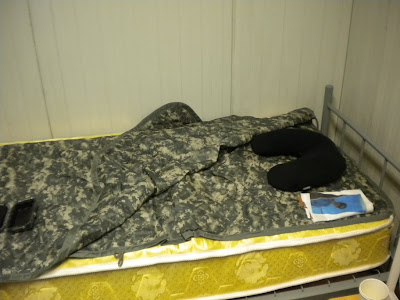 The poncho liner can be rolled into a ball roughly the size of my two fists if you really crank down on it, and it'll unroll to it's full size without a problem.  It'll keep you warm in anything above freezing temperatures, and if you throw on a layer or two it'll keep you warm when it's colder than that.  I can't count the number of times I've left my sleeping back behind and just carried my poncho and poncho liner in my ruck.  Lay out the poncho, lay the poncho liner on top, lay yourself in the middle and then wrap up like one big Soldier burrito.  You stay warm and dry all night long.

The picture of my wife is something that she came up with years ago.  You can buy iron-on transfers that you run through your home printer (another modern miracle!  Anyone remember those old mimeograph machines?), and then you slap 'em on a shirt, or on whatever.  Well, she printed out a picture of herself and ironed it onto a white hankerchief, and gave it to me for Operation Brightstar.  If it gets crinkled you just smooth it out, you can wash it and it doesn't die, and there's no glass to break.  It goes everywhere with me so that I always have my wife no matter where I go.

Speaking of Camp Phoenix, this is a picture of Patriot Square at night. 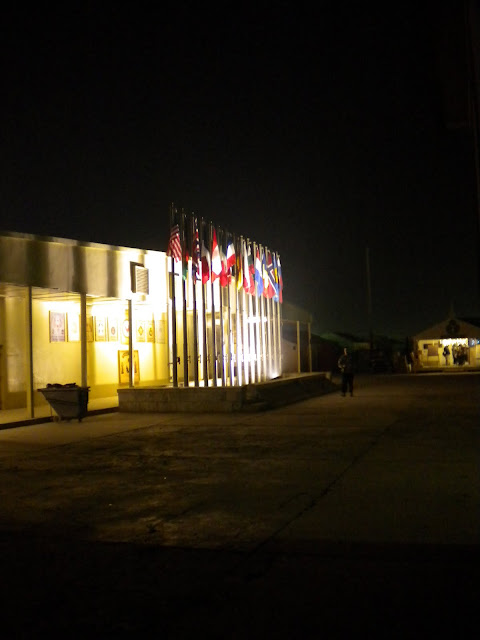 It's about 3.5MB if you want to download it.  The DFAC at Phoenix has the flags of our coalition partners up in front of it.  The plaques on the wall behind the flags are the unit crests of the various US Army units that have been in charge of Camp Phoenix.  You can't see them in this picture, but further down the wall are plaques for the various other countries that have served with us at Phoenix.  When I was there it was the Bulgarians and Romanians.

And I made sure that nobody could recognize the guy walking by the flags.

So there you are.  Two photos from my mission, and another modern miracle.  The Ragin' Mrs. and I are headed down to Mad Town today to see if we can't rescue a few ferrets.  Updates on that later.  See you tomorrow!
Posted by Ragin' Dave at 07:28 No comments:
Email ThisBlogThis!Share to TwitterShare to FacebookShare to Pinterest
Labels: Personal crap, Photo Time

Over at Cold Fury, Mike links to an auto blog that talks about the modern miracle of the internal combustion engine.  I think that there are a lot of modern miracles that people take for granted, and I believe part of it has to do with the fact that technology is changing so quickly that the newer generations don't even know that there was a more primitive form of whatever they're using.  Hell, just think about cameras.

I remember my first camera.  It was an old Kodak 110 film using brick.  Hell, even my first Nikon SLR would be archaic by today's standards.  Nowadays if you can't download the picture instantly onto a computer then it's just not worth having.  Hell, I used to use an old digital camera for my job in Seattle, and it was a snazzy, high-speed (for the time) 3.5 megapixel behemoth.  These days you can get a cell phone with a 4 mp camera in it.  Hell, these days a cell phone with any camera LESS than 4 mexapixels doesn't sell.

You push a button.  The image is transferred into a bunch of ones and zeros.  Those ones and zeros fly through the air to a box thousands of miles away, where they reassemble themselves into the very same image you just saw.  I can take a picture in Afghanistan, email it to my family, and they can see what I see in less than five minutes.

What modern miracles can you think of?
Posted by Ragin' Dave at 05:33 No comments:
Email ThisBlogThis!Share to TwitterShare to FacebookShare to Pinterest
Labels: "Modern" Life

How do you know when you've "made" it in the Blogosphere?

When Chris Muir does a strip about your blog.

I gotta find a way to get Day by Day up on this'un here.
Posted by Ragin' Dave at 05:18 No comments:
Email ThisBlogThis!Share to TwitterShare to FacebookShare to Pinterest
Labels: Blog Stuff, Linky Love

The Government. Is there anything they can't screw up?

Can we finally tell these fuckers to go suck-start a shotgun?  Pretty please?

PORT-AU-PRINCE, Haiti — Food handouts were shut off Tuesday to thousands of people at a tent city here when the main U.S. aid agency said the Army should not be distributing the packages.

It was not known whether the action reflected a high-level policy decision at the U.S. Agency for International Development (USAID) or confusion in a city where dozens of entities are involved in aid efforts.

"We are not supposed to get rations unless approved by AID," Maj. Larry Jordan said.

Jordan said that approval was revoked; water was not included in the USAID decision, so the troops continued to hand out bottles of water. The State Department and USAID did not respond to requests for comment.


So the system that was in place and working, providing food and aid to the people of Haiti, was stopped and shut down because some worthless fucking government buttnugget didn't like the fact that it wasn't a different (read:  THEIR) government agency doing it.

Just....  wow.  I'm sure the people of Haiti feel so much better knowing that the Army will no longer be handing out food without the proper approval.  After all, starving to death isn't as horrible as being given food by the wrong bureaucracy!

Folks, these are the same people who would be in charge of your healthcare if the American Communist Party has their way.  Think about that.

And by the way, France calling us "occupiers"?  You might want to tone that rhetoric down a bit, considering we're delivering aid to a country that speaks French due to the centuries of French occupation.  Or perhaps the French would like to show us just how much aid and help they can send to Haiti?  No?  The 82nd Airborne Division is doing just fine?  Ce magnifique!

Posted by Ragin' Dave at 04:58 No comments:
Email ThisBlogThis!Share to TwitterShare to FacebookShare to Pinterest
Labels: Nucking Futs

I'm so flabbergasted by this that I don't quite know what to say.

Earlier today Denis Blair, Director of National Intelligence testified at a Senate Homeland Security Committee hearing into the Christmas Day Bomb plot that the bomber should have been placed in the administration's interrogation program for high-value suspects but wasn't.

Tonight via Keep America Safe we find out that the DNI Blair has changed his story.


Go ahead and read it all.  And then understand that the only thing protecting Americans while they fly is 20-something-year-old Dutch tourists.  It is most certainly NOT the people in the American government who are supposed to be making sure we don't have exploding planes and flaming bodyparts falling from the sky.

What a clusterfuck.  What an absolutely horrifying clusterfuck of galactic proportion. If I had an employee that was THIS FUCKING INCOMPETENT, I'd fire them as soon as possible.
Posted by Ragin' Dave at 04:22 1 comment:
Email ThisBlogThis!Share to TwitterShare to FacebookShare to Pinterest
Labels: Complete Incompetence, General Stupidity, homland secuity

A Note of Caution

Especially to the GOP, who would love nothing more than to hitch their wagon to the same force that Scott Brown has.

Of course, if you speak German (or even understand a smattering of German) a bit of the effect is lost, but I still LOLed nontheless.
Posted by Ragin' Dave at 05:40 No comments:
Email ThisBlogThis!Share to TwitterShare to FacebookShare to Pinterest
Labels: LOL

"It all started with me, my truck, and a few dedicated volunteers. It ended with Air Force One making an emergency run to Logan" -- Scott Brown(R)

But the quote that made it all worthwhile?

Olbermann, Maddow, Sullivan and Josh Marshall are melting down... and Nancy Pelosi(D) is promising to double down.

It is such a good day.

I saw this post over at Big Dick's (might not be safe for work, depending on where you work), and the thought running through my mind is "You know, the Ragin' Mrs. is pretty flexible, and if that's not the perfect position for a good tongue lashing I don't know what is....."

Although I would assume that the effort it takes to hold that position might render said tongue lashing ineffective.  But the thought is still there.
Posted by Ragin' Dave at 05:14 No comments:
Email ThisBlogThis!Share to TwitterShare to FacebookShare to Pinterest
Labels: Musings and Meanderings

I had a thought the other day, and I want to share it - don't laugh until you've heard my explanation, m'kay?

Jessica Simpson is the smartest woman in showbusiness right now.

No, seriously, think about it!  Here is a woman who has made her entire movie career off of her boobs and butt.  And yet she's never once shown either of them in their full, bare, beautiful entirety.

That takes brains.  Prove me wrong.
Posted by Ragin' Dave at 05:08 1 comment:
Email ThisBlogThis!Share to TwitterShare to FacebookShare to Pinterest
Labels: "Modern" Life

Houston, we have a problem

Togo West used to be the Secretary of the friggin' Army, people.  You want to know why political correctness is killing the military?  Because we had idiotic cumstains like Togo West in charge.

Gah.  This "report" is only fit for use as toilet paper.
Posted by Ragin' Dave at 05:05 No comments:
Email ThisBlogThis!Share to TwitterShare to FacebookShare to Pinterest
Labels: Military Life, Nucking Futs, Radical Islam

Saved, copied, and then emailed to about thirty different friends - Phil put up a Periodic Table of beer styles.

Other than paying for comments, anyone have any suggestions?  Email me.  wraithwulf-AT-yahoo-DOT-com
Posted by Ragin' Dave at 06:14 1 comment:
Email ThisBlogThis!Share to TwitterShare to FacebookShare to Pinterest
Labels: Blog Stuff
Newer Posts Older Posts Home
Subscribe to: Posts (Atom)