Say it with me - Federal Gun Database.

Fuck the state of Hawaii.  It's as if they asked "How can I make sure Dave never spends money there again?"
Posted by Ragin' Dave at 05:51 No comments:
Email ThisBlogThis!Share to TwitterShare to FacebookShare to Pinterest
Labels: 2A

Apparently the "Brexit", or Britain leaving the EU is a thing now.

Americans, take note.  "When in the course of human events" and all that.
Posted by Ragin' Dave at 05:39 2 comments:
Email ThisBlogThis!Share to TwitterShare to FacebookShare to Pinterest
Labels: World Affairs

I'm supposed to have a motorcycle class today

We've got thunderstorms overhead right now, with a wall of water coming down and lightning cracking within one mile of the house.

Somehow, I don't think that class is going to kick off on time.
Posted by Ragin' Dave at 04:48 No comments:
Email ThisBlogThis!Share to TwitterShare to FacebookShare to Pinterest
Labels: Personal crap

Think about that for a bit, will ya?

Attorney General Loretta Lynch admitted today that the FBI is unaware of the whereabouts of Omar Mateen's wife, Noor Salman.

Salman has indicated she suspected Mateen was about to commit a terrorist attack, and even accompanied him to buy the weaponry he used to carry out the massacre. She insists, however, that as he left she tried to hold onto his arm so he wouldn't leave.
If the FBI believes she was aware of the impending attack, she could be prosecuted.

"Has the shooter’s wife left the state of Florida?" a reporter asked Lynch during her press conference Tuesday.

"Right now, I don’t know exactly the answer to that," Lynch candidly replied. "I believe she was going to travel but I do not know exactly her location now."


I take back what I said yesterday.  Loretta Lynch is not a smart woman.  She is horrifically stupid, which is par for the course with the Obama administration.
Posted by Ragin' Dave at 04:26 No comments:
Email ThisBlogThis!Share to TwitterShare to FacebookShare to Pinterest
Labels: Complete Incompetence, Dirty Fucking Hippy Losers

The Attorney General of the USA, a monumentally stupid and dishonest woman named Loretta Lynch, says that the motive of the Orlando Shooter may "never be known"!

Apparently, shooting fags in a club while calling 911 and pledging your murder to ISIS and Abu Bakr al-Baghdadi just isn't clear enough.

No, I don't think that Lynch actually believes the bullshit that comes dribbling out of her mouth.  I doubt she's that stupid.  I think she's just a worthless lying hack who cares more about politics and power than she does about America or the Constitution.

It's all the people who voted for Obama who are dumber than a wet sack of hammers.
Posted by Ragin' Dave at 05:49 2 comments:
Email ThisBlogThis!Share to TwitterShare to FacebookShare to Pinterest
Labels: anti-American, Dumb as a fucking stump

In case you watch the "news"

which means you don't get any actual important information from ABC/CBS/NBC/CNN/etc, fifty-one foreign policy experts from the State Department have essentially signed a document that says Obama and Clinton are screwing this country royally.

Apparently you might get one or two people who sign these things, called "Dissent Cables".  But 51 folks signing one is unheard of.  It's HISTORIC!  Just another HISTORIC thing that we can hang on Obama, like his HISTORIC number of people on food stamps, and his HISTORIC debt.
Posted by Ragin' Dave at 05:42 No comments:
Email ThisBlogThis!Share to TwitterShare to FacebookShare to Pinterest
Labels: Clinton Shennanigans, Obama, World Affairs

Gun Control fails in the Senate

Why is it that when some Splody-dope whackjob kills people while screaming "ALLAHU ACKBAR!" they Left always, ALWAYS attacks Christians and law-abiding gun owners?

That was rhetorical.  We all know the reason.  They Left doesn't care about Islamic Jihadists.  The Left is allied with the Jihadi shitwads.  It's all about power, and as long as common folk have guns, then the Left can't impose their power on them the way they want to.  So those guns have got to go.

There wasn't a single gun control measure proposed by the traitorous Democrats that would have prevented Orlando from happening.  But that's not the point.  They don't want to prevent another Orlando.  They can't even bring themselves to name the evil that shot up a gay nightclub.  Islam.  Jihadism.  The Left can't admit who actually committed this crime, and they sure as hell aren't going to address it in any meaningful way.  They're going to attack the people who are not responsible for the Orlando shooting, because they cannot admit that one of their favored minority classes might possibly be responsible for the massacre.

In their desire to destroy private ownership of guns in this country, the Left will destroy due process. the presumption of innocence, all of it.  Because they hate the Constitution of this country, as it stands in their way of total control.  And they think they can use gun control to destroy Due Process and every other Constitutional protection that we have.  And they're going to keep trying.

Hillary must never, ever get into the White House.  The Democrats are too close to causing a civil war in this country.  We would not survive a Hillary presidency.
Posted by Ragin' Dave at 04:17 No comments:
Email ThisBlogThis!Share to TwitterShare to FacebookShare to Pinterest
Labels: 2A, anti-American, Democrats, Evil Does Exist

US Air Force assaults retiree, refuses to let him speak

Because he dare utter the name "God".

This is a direct violation of the 1st Amendment of the Constitution, perpetrated by people who SWORE AN OATH to PROTECT AND DEFEND that Constitution!

Every person who had a hand in this absolute travesty and abortion of their oath needs to be removed from their position and sent packing.  Period.
Posted by Ragin' Dave at 16:31 No comments:
Email ThisBlogThis!Share to TwitterShare to FacebookShare to Pinterest
Labels: anti-American, Anti-Military, Constitution, Diseased Freaks, Nucking Futs

One Problem of Dealing with Leftists

Is that no matter how intelligent an individual might be, collectively they're dumber than a mud fence.

But the massacre was domestic gun violence. Democrats might just as well say that murder caused the murders.

The Left forces itself into idiocy.  They subjugate themselves to indoctrination in order to belong to their hive mind collective.  It's why bumper sticker slogans are so popular on the Left.  It doesn't take much brain power to regurgitate a Leftist slogan, and in order to actually believe those Leftist memes adorning various cars you have to make yourself stupid.

For example, this blithering idiocy: 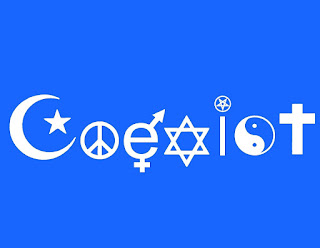 What kind of mouth-breathing halfwit takes a look at all the bloodshed in the world and says "Oh yeah, it's those stinkin' HINDUS that are the problem!  Yeah, those violent Buddhists are on a rampage!  Evil Christians everywhere!  COEXIST, YOU MORONS!"

The very first letter in that most mindless of slogans is what killed 49 people in Orlando.  and 14 people in San Bernadino.  And on and on and on, but to the Left it's that LAST letter that's the problem.

That takes indoctrination.  That takes servile insanity.  That takes a person willingly putting away his ability to reason and use logic and see reality, and buy into an imaginary dream world where socialism works and even Christian capitalists are the real problem.

And the Left buys into that dream world, no matter how intelligent they are one on one.

And along with the world being flat, Leftist now know that the world is gonna BURN UP AND DIE!!!!!!111!eleventy!!! even though we still haven't gotten back to Greenland being, y'know, GREEN AGAIN like it used to be.  And Socialism really really works even though every single socialist economy is either treading water or circling the drain.  Hugo Chavez's daughter is worth over $1 billion, but people can't buy toilet paper in Venezuela.  Yay socialism!

How can you have a rational discussion with people who intentionally lobotomize themselves?
Posted by Ragin' Dave at 05:35 No comments:
Email ThisBlogThis!Share to TwitterShare to FacebookShare to Pinterest
Labels: Assholes, Dumb as a fucking stump, Idiocracy, LoonyLefties

Five gallon batch of wine started.  Three test batches of wine started as well, pear cider, pear wine and elderberry mead, as the folks who are teaching me to work a bee hive also gave us some elderberries from their garden and said "What can you make with this?"

Called dad.  If your fathers are still kicking, call them today.

Finishing up the day with a beer and a cigar out back.  Life ain't half bad, eh?

Oh, and the ribs yesterday came out friggin' awesome.  Just so you know.
Posted by Ragin' Dave at 18:21 No comments:
Email ThisBlogThis!Share to TwitterShare to FacebookShare to Pinterest
Labels: Personal crap
Newer Posts Older Posts Home
Subscribe to: Posts (Atom)