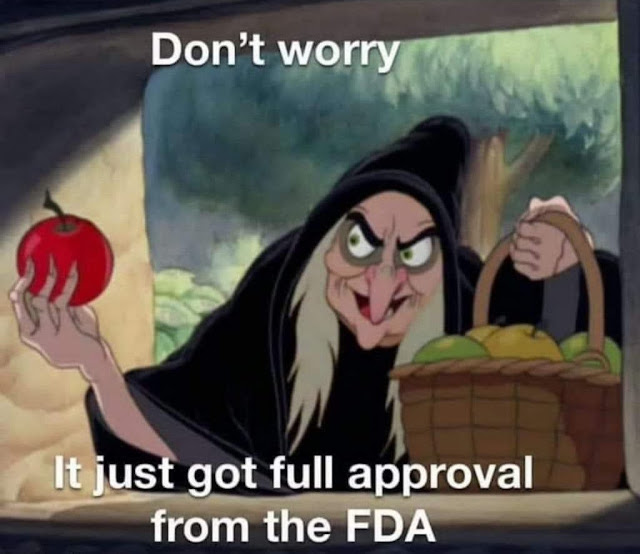 Posted by Ragin' Dave at 20:19 No comments:
Email ThisBlogThis!Share to TwitterShare to FacebookShare to Pinterest
Labels: Get Down With The Sickness

Also, child brides being imported by the US Government.

A veteran friend posted on Facebook this week that they're having trouble getting his interpreter's family out of Afghanistan. Finding out someone in your family worked with the Americans tends to anger Joe Biden's partners in peace, the Taliban. My friend was less than thrilled to read in the Associated Press that while his interpreter's family is left behind, we've been importing an above-average amount of child brides. By above average, I mean any number greater than zero.

I have a schtick where every time some atrocity happens because we've allowed a third-world barbarian from a shithole country to come to the USA, I point out:  "This is what they do in their country.  And this is what they will do in ours."

When the brain-dead leftist zombies groan and moan about "muh diversity!" and "multiculturalizm!", realize that this is what they want to allow in the formerly United States of America.  Child brides.  Granted, Drooling Joe the Chinese Hand Puppet does have a thing for young girls, as well documented by him sniffing and groping every pre-pubescent girl he can get his hands on.

It's gonna play real well in Dearbornistan, that's for sure.

Posted by Ragin' Dave at 08:39 No comments:
Email ThisBlogThis!Share to TwitterShare to FacebookShare to Pinterest
Labels: 7th Century Goat-Fucking Barbarians, Islam, The Death of Civilization

We're headed out to meet up with some friends and practice slow speed maneuvers today.  Throw down some cones, do some turns and weaves and bob's your uncle.  Anybody can go fast on a bike; once the wheels are turning, it's really not that difficult to stay upright.  But slow speed riding?  That's a challenge.  A lot of big, bad biker dudes cry when they can't do a u-turn on their bike, while some 350 pound old guy on a Goldwing is doing figure-eights around them because that old guy PRACTICED.

So, today we practice.

Posted by Ragin' Dave at 08:33 No comments:
Email ThisBlogThis!Share to TwitterShare to FacebookShare to Pinterest
Labels: Personal crap

I had today off

I told myself I wasn't going to do anything.  It was going to be me, doing nothing but smoking cigars and relaxing.

I have failed.  I suck at doing nothing.

These results are definitely not what you were sold by the CDC, Fauci, Trump, Biden, your State Health Department and all the advertising on the TeeVee and social media.  You were sold nearly 100% effectiveness sufficient to remove your fear of getting Covid-19.  What you actually got is more akin to what you get out of the flu shot if you take it each year: Some attenuation of risk but, in many cases, absolutely nothing of value.

The difference is that unlike the flu shot that rarely harms anyone beyond a sore arm for a day or two (last year's flu shot campaign, which delivered about 170 million doses, recorded 26 associated deaths) VAERS says that 13,627 deaths and nearly 56,000 hospitalizations have been associated with these jabs -- thus far.

If you got the jab, you were lied to in order to get you to accept it.  I don't hold that against anyone.

But we have data out now.  And the data says that the jab doesn't work as well as we were promised.  The efficacy fades over time, and it doesn't stop transmission.

Look at who lied to you.  And plan accordingly.

Posted by Ragin' Dave at 01:00 1 comment:
Email ThisBlogThis!Share to TwitterShare to FacebookShare to Pinterest
Labels: Get Down With The Sickness

There's something seriously wrong with the upper leadership of the military.

Something is terribly wrong in the ranks of America’s top commanders that reflects something wrong with the country.

The Pentagon needs to stop virtue-signaling about diversity days and culturally sensitive food for Afghan refugees. Instead, can it just explain why the Bagram air base was abandoned by night, or why Taliban terrorists are our supposed “partners” in organizing our surrender and escape?

Which general allowed more than $85 billion in American weapons to fall to the Taliban — a sum equal to the price of seven new U.S. aircraft carriers?

Who turned over to the Taliban the lists of Americans and allied Afghans to be evacuated?

My standard response to bad news is that no matter how bad that news is, it's probably worse than what we're actually being told.  And with this illegitimate government, it's most likely even worse than that.

Posted by Ragin' Dave at 06:59 2 comments:
Email ThisBlogThis!Share to TwitterShare to FacebookShare to Pinterest
Labels: Anti-Military, Democrats, Illegitimate and Corrupt

Except it's not this funny 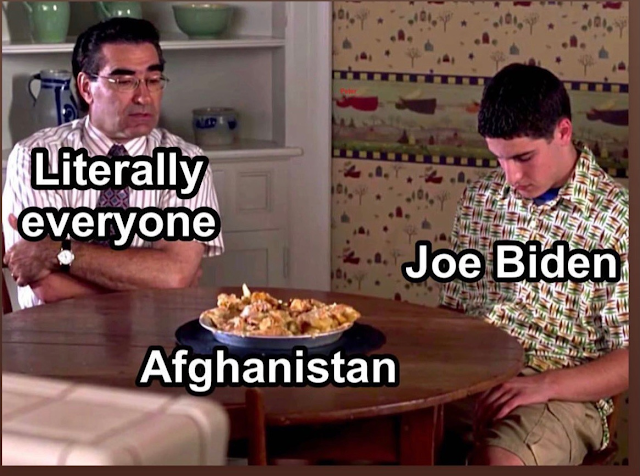 Posted by Ragin' Dave at 01:00 No comments:
Email ThisBlogThis!Share to TwitterShare to FacebookShare to Pinterest
Labels: Biden is a puppet, Well and Truly Fucked

I'm struggling here quite a a bit, folks.  After watching the Americans left behind, our allies left behind, those poor dogs left behind, all to be dealt with by 7th century barbarians, while our so-called "elite" lie to us every single day....  I don't think I've ever before been ashamed of the uniform I wear.  At this point, the only reason I'm staying in is so that when orders come down, and that shitty little staff sergeant on tic toc begins to point her weapon at US Citizens, I can put a bullet in their heads and remind MY troops that their oath to the Constitution still means something to me.
Posted by Ragin' Dave at 01:00 1 comment:
Email ThisBlogThis!Share to TwitterShare to FacebookShare to Pinterest
Labels: The Death of America

I'm in such a rage right now that my stomach hurts.

Leaving Americans behind to be slaughtered was the injury.  This is the insult. 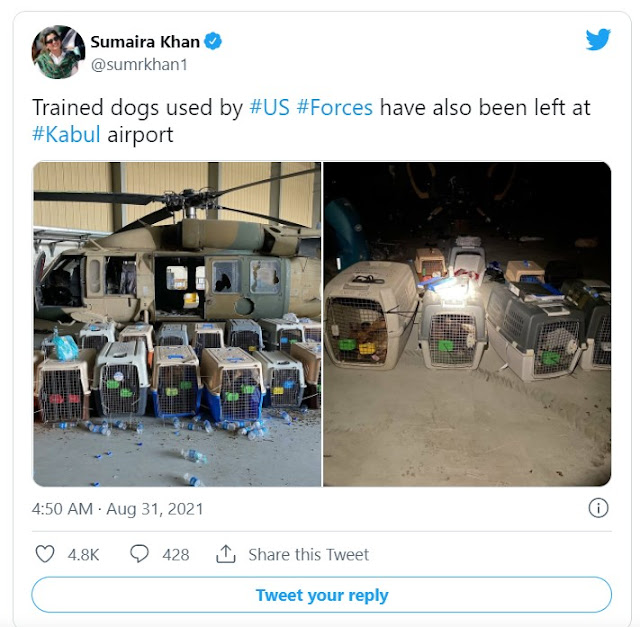 I cannot behind to describe how angry I am, that the Biden junta and their half-witted regime left behind dogs to be slaughtered by the Taliban.  Those dogs wouldn't be there if it weren't for us.  And there they are, kenneled up and ready for the Taliban to pull them out and kill them one by one.  Painfully.

Every time I think I cannot hate the Biden junta even more, they crank it up another notch and make me realize that I'm not half as Christian as I want to be.

Posted by Ragin' Dave at 18:27 3 comments:
Email ThisBlogThis!Share to TwitterShare to FacebookShare to Pinterest
Labels: Allies Abandoned by Democrats, Evil Does Exist

Here's a handy graphic for ya

The numbers differ a little bit from Drumwaster's tally, but it's close enough for government work.

Yeah.  The Taliban controls all of this now.  Great going, guys!  Heckofajob there!

As Drumwaster mentioned, it's hard to call the deliberate delivery of these weapons and vehicles to the hands of the Taliban anything less than treason.  But then, leaving Americans stranded in Afghanistan so you can have a political photo op is just as bad.  Drooling Joe and the Gang Who Can't Shoot Straight have done both. 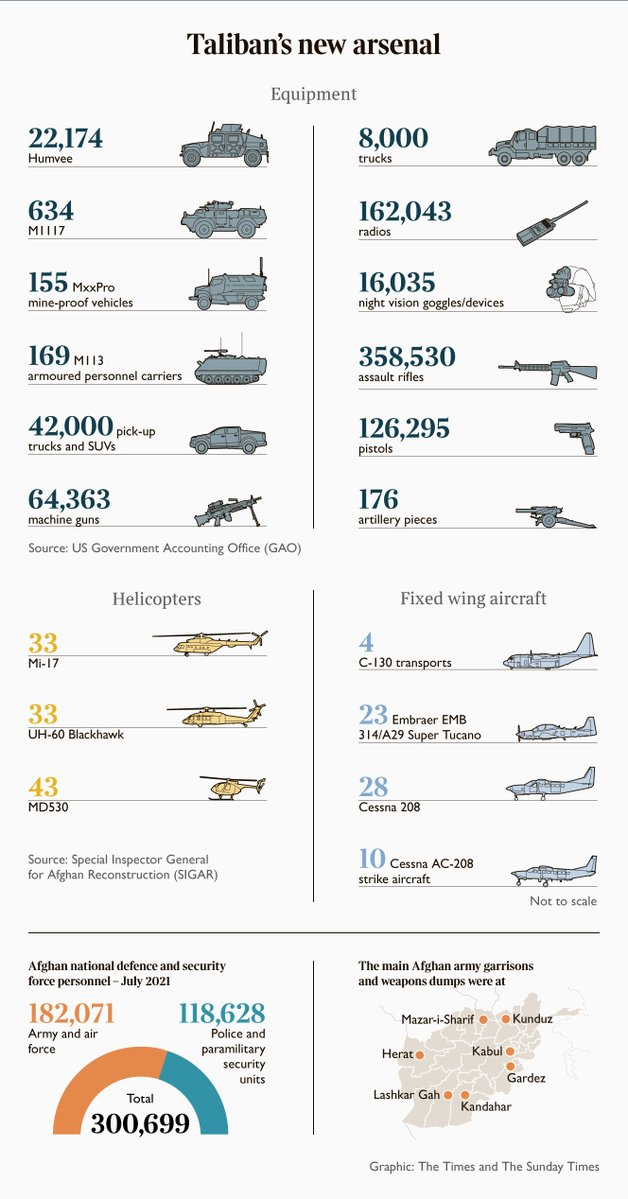 Fire all their asses and torch the place where they stood

The Taliban actually offered us control of Kabul, and the people in charge turned it down.

THOSE PERFUMED PRINCES TURNED IT DOWN!

“We have a problem,” Baradar said, according to the U.S. official. “We have two options to deal with it: You [the United States military] take responsibility for securing Kabul or you have to allow us to do it.”

Throughout the day, Biden had remained resolute in his decision to withdraw all American troops from Afghanistan. The collapse of the Afghan government hadn’t changed his mind.

McKenzie, aware of those orders, told Baradar that the U.S. mission was only to evacuate American citizens, Afghan allies and others at risk. The United States, he told Baradar, needed the airport to do that.

On the spot, an understanding was reached, according to two other U.S. officials: The United States could have the airport until Aug. 31. But the Taliban would control the city.

That sound you hear throughout the land is all the leaders of WWII spinning in their graves.  And my white hot incandescent rage at the entire military so-called "leadership" who shouldn't be in charge of a platoon, much less the entire military.  It's one thing for Drooling Joe the Chinese Hand Puppet to screw up this badly - he's a senile halfwit, and both he and his handlers hate America in a myriad number of ways.  But the military is supposed to be BETTER than that.  The military is actually supposed to care about our people.  The military is actually supposed to NOT LEAVE AMERICANS TO DIE.  And if they couldn't find a way to do that with Drooling Joe (and his puppetmasters) mission parameters, then you either buck up and tell him no, or you FUCKING RESIGN.  "I'm sorry, but I'm not going to leave Americans to be slaughtered and beaten by the Taliban.  So you either accept my plan of action or you accept my resignation."  It's that simple.  And every fucking general down the line should have been ready to do that.  But no, the flag officers for the Army seem to be capable of nothing more than regurgitating bullshit of every variety, from Thoroughly Modern Milley down to this MG McKenzie and probably far further down than that, and not a single fucking one of those people seem to care about anything other than their own careers.

They GAVE control of Kabul to the Taliban.  The goat-fucking terrorists didn't take it, it was HANDED TO THEM.

Posted by Ragin' Dave at 07:39 1 comment:
Email ThisBlogThis!Share to TwitterShare to FacebookShare to Pinterest
Labels: Complete Incompetence, Democrats, Killing is too good for them

If we had military leadership worth a damn, this wouldn't be happening

Americans being turned away from the Kabul airport.

The State Department, headed by Secretary of State Antony Blinken, is in charge of the evacuation effort. The Pentagon is subordinate to State in Kabul and if soldiers are turning Americans away at the airport, it would be under State’s orders.

But we don't have military leadership that's worth a damn.  We have Lloyd Austin, a pathetic fucking racist shitbag politician, and Thoroughly Modern Milley, who wants to understand "White Rage" but doesn't seem to understand how to protect Americans and win a war against men who have sex with goats.

And the less we say about Drooling Joe the Chinese Hand Puppet, the better.

In 1975, we left our allies to die by communist hands,  Joe Biden was part of that.

In 2021, we're leaving Americans to die by terrorist hands.  And Joe Biden is responsible for that, as well as all the apparatchiks who made the election fraud possible, and all the deep state swamp creatures who enable those bastards.