Up and Out early

Back home now, but wiped out.  Expect the same tomorrow.
Posted by Ragin' Dave at 15:08 No comments:
Email ThisBlogThis!Share to TwitterShare to FacebookShare to Pinterest

Out: Being healthy. In: Thin Privilege!

To mark “International No Diet Day,” the University of Minnesota's School of Public Health invited Virgie Tovar, a Cal-Berkeley lecturer and “fat activist,” to instruct America’s future nutritionists, dietitians and social workers on the finer points of “fat oppression.”


I bet you'll be SHOCKED at what this "fat activist" looks like! 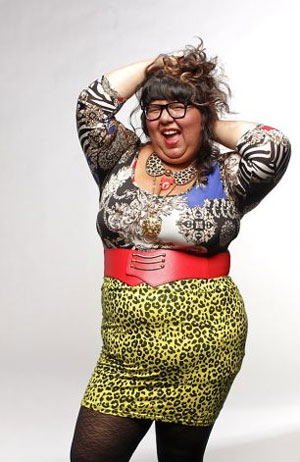 I'm the first guy you'll meet who will knock the supermodel, "heroin chic" look.  If you've followed me for a while, I prefer my women to be healthy, not look like they've just been released from a concentration camp.  But folks, that up there isn't healthy.  That's just ten pounds of flabby crap shoved into a five pound dress.

How many buzzwords can you fit into one college speech?  Apparently, lots.  And it's all bullshit.

Yes.  And you know it's true.  Every single word that drops from her mouth like the crumbs from the entire box of Krispy Kremes she ate this morning is bullshit.  You want to know why modern society gives the obese a bit of crap?  Because A) Being obese is unhealthy, and B) being obese is (99% of the time) the fault of the obese themselves.

I ain't the one forcing you to eat an entire bag of Fritos, folks.  Oh, and "oppressing people with larger body types"?  Horseshit.  That's just a victims way of whinging "I'm not fat, I'm just big boned!"  Utter bollocks and bullshit.  I am big boned.  I also drink beer, maybe two a night if I'm feeling frisky.  Guess which one contributes to my beer gut?

Hint:  There's a reason they call it a beer gut, and not a "Caesar Salad with Grilled Chicken Gut".

The bottom line is that Flabby McLiberalFascist up there just wants to find someone to blame for her inability to put the fork down.  No, it could NEVER be that she can't stop herself from eating the entire bucket of KFC extra crispy.  Nope, it's always SOMEONE ELSE'S FAULT in loony liberal land, and that someone is WHITE MALES!  The "white heteronormative society" that creeps out of her closet at night and forces her to binge-snack on bacon covered maple donuts, yeah, YEAH, THOSE GUYS are the problem, and they need to accept her for who she is, quivering jowls and all!

Because unlike the fashion-challenged land-whale Vergie Tovar, I don't whine and snivel about how mean other people are.  I work the calories off to make sure I don't have to squeeze my gut sideways through the door of the local In-and-Out.
Posted by Ragin' Dave at 05:35 6 comments:
Email ThisBlogThis!Share to TwitterShare to FacebookShare to Pinterest
Labels: Dirty Fucking Hippy Losers, Modern Life, Moonbats on Parade, Nucking Futs

The essence of Leftism

Please note the headline.  It's written to imply that straight men who find out that the "girl" they brought home has a penis instead of a vagina are somehow being mean, or racist, or .....  something "phobic".

The headline is written to imply that the guys who thought they were dating a girl are the ones with the mental illness, rather than the one guy who thinks he's a girl.

This is about as Leftist as you can get.  The complete and total rejection of reality, including biology.
Posted by Ragin' Dave at 05:29 4 comments:
Email ThisBlogThis!Share to TwitterShare to FacebookShare to Pinterest
Labels: Modern Life, Nucking Futs

Here's the best definition of "Conservatism" that I've seen

And of course it's from John C Wright.

At the risk of repeating myself, here is a summary of my early EveryJoe articles on politics:

These are specific contradictions of seven anti-ideas promoted by the Left (I say ‘promoted’ not ‘believed’ for no man can believe in them, any more than he can believe in a five-sided triangle)


He then goes on to list the seven Anti-Ideas of the Left.  Read the whole thing.  This is the sort of intellectual ammunition you need when dealing with various Leftists, both GOP and Donk.
Posted by Ragin' Dave at 05:17 No comments:
Email ThisBlogThis!Share to TwitterShare to FacebookShare to Pinterest
Labels: Must Read

I have nothing to add

Posted by Ragin' Dave at 18:56 No comments:
Email ThisBlogThis!Share to TwitterShare to FacebookShare to Pinterest
Labels: Must View

The SCOAMF doubles down on his "You didn't build that" speech

"You just got lucky" says the the Marxist Messiah.

Here's the deal:  this is called PROJECTION.  It's Rule #3 of SJWs.  They always project.  Obama hasn't actually done a damn thing on his own in his entire life.  Everything has pretty much been handed to him.  He's too incompetent to do things himself, but he sure as hell can suck off of whatever dole is being dished out.  That's why he's the only "President' of the Harvard Law Review who didn't write anything for the Harvard Law Review!  He's the Affirmative-Action President!  He got elected because he was black, and THAT.  IS.  IT.  That's the only reason.

So naturally, he assumes that everybody else is just faking it too.

He's the Kim Kardashian President.  He's most likely going to be followed by an actual reality TV freak show.