Saw this while coming back from grocery shopping.  Damn near lost my mind. 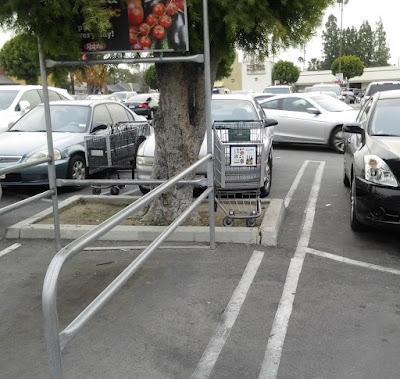 This is just one example of why I cannot wait to leave this place.  It's full of people who are too stupid and lazy to push the damn shopping cart an extra six feet into the cart corral.

This attitude carries over into every other aspect of their lives.  Being that fucking lazy and worthless is not the problem; it is a symptom of the problem, and the problem is that I am surrounded by selfish, lazy, stupid fucking assholes on a constant basis.

Put the cart.  Into the corral.  Six.  Fucking.  Feet.  But apparently that's too much effort for the slack-jawed, drooling, mouth breathing fuckwits who live in the San Fernando Valley.  Just like putting their plastic bags into the trash was too much effort, which caused the LA river to be festooned with trees covered in plastic bags that were just tossed into the road.  Which is why LA county banned plastic bags, by the way.  Just like throwing your trash in a TRASH CAN takes too much effort, which is why I pick up litter from the sidewalk next to my house every week.

Just like giving a fuck about your fellow man takes too much effort for these shitheads, which is why every time I turn around I'm confronted by yet another greedy, selfish asshole who can't bother to do any of the basic things that make civilization function smoothly, such as use a turn signal, share the sidewalk, stop at red lights, pick up after their dog, or any other of the myriad acts of courtesy that allow people to live in close quarters.

Soon, soon, soon I will be out of this shithole.  And then, quite frankly, the entire city of Los Angeles can sink in to the ocean and drown for all I care.
Posted by Ragin' Dave at 20:14 4 comments:
Email ThisBlogThis!Share to TwitterShare to FacebookShare to Pinterest
Labels: Fuck Los Angeles

So perhaps a selection from the sidebar over on the right?  There's a new blog in the blogrolls:  Musings Over A Pint.  He's a shooter, a beer enthusiast, and has one hell of a first name.  The name of Kings, even.
Posted by Ragin' Dave at 13:08 No comments:
Email ThisBlogThis!Share to TwitterShare to FacebookShare to Pinterest

That I get a little resentful over the fact that the Catholic Church I grew up in was so divorced from what it used to be.  Reading things like this makes me wonder "Where was this when I was growing up?  Why couldn't things have been explained like this when I was a kid?"

The answer, of course, is that Fulton Sheen came from the Tridentine Rite, and therefore was considered not required by the new, "modern" Mass, and was discarded as being "old-fashioned".

What a crock.
Posted by Ragin' Dave at 08:40 No comments:
Email ThisBlogThis!Share to TwitterShare to FacebookShare to Pinterest
Labels: Religion

Got into an argument with a supposed Catholic on Twitter.

I say supposed because this woman supported every Leftist meme you can think of, including abortion.  Anyone who claims to be Catholic or pro-abortion is lying about one side or the other.  You cannot be both Catholic, meaning you follow the Catechism of the Church, and pro-abortion.  They contradict each other.  They are mutually exclusive.

I have no doubt that in the Novus Ordo Catholic Church, there are many, many people who believe they can hold both views.  They are wrong, and they have never honestly looked at Church doctrine, or what they claim to profess.

In any case, I pointed out to this woman that you can be one or the other, but you cannot be both.  The result was something that I can only call a rage spiral, especially as she tried to hit me with SJW rhetoric, and I didn't back down.  I kept pointing out that claiming to be both Catholic and pro-abortion makes you a hypocrite for either one side or the other.

At that point, the woman called her friends into her little rage spiral, and they threw one massive, gigantic temper tantrum online.  However, you can look up a person's bio on Twitter, and I noticed one thing.

Not one single friend of hers joining in her rage spiral against me claimed to be Catholic.  I saw atheist, agnostic, anti-theists and one Jew.  But not one Catholic.

You surround yourself with people whom you agree with.  This woman apparently finds more agreement with people diametrically opposed to her faith, who encourage her to stray away from her faith and lead her down a path away from everything she claims to profess.

And when someone points it out, they all rage.

It's much like what drug addicts do when one of them tries to get clean.  You won't find much support for sobriety in a shooting gallery.

In any case, this is the last amount of energy I'm going to expend on her.  She's not worth anything more than that.
Posted by Ragin' Dave at 21:35 4 comments:
Email ThisBlogThis!Share to TwitterShare to FacebookShare to Pinterest
Labels: Religion

I have a member of my extended family going to Wheaton

And over Christmas they told us about a professor there who was causing a bit of an issue.  Turns out, Wheaton finally got tired enough to do something about it.  Bully for them!

Wheaton is a Christian university.  It's professors must be Christian themselves, as it's a requirement of their employment.  Walking into class wearing the hijab and claiming that muslims and Christians worship the same god will not fly.  Refusing to communicate with the school's leadership, and instead throwing a public temper-tantrum, will result in negative action against you.

Wheaton will be much better off once they get rid of her.
Posted by Ragin' Dave at 12:43 No comments:
Email ThisBlogThis!Share to TwitterShare to FacebookShare to Pinterest
Labels: Dirty Fucking Hippy Losers

This is what they do in their own countries


One of the reasons that I'm rather anti-immigration is that I've been to many of the countries that the immigrants are coming from, and I've seen what they do in their own nations.  And I don't want to bring that to my country.  We no longer force people to assimilate to America, we now coddle them along while regurgitating cheap slogans such as "Diversity!"

Well, those muslims just diversified the shit out of Cologne, didn't they?  Do you like your diversity with a side of rape?  Too bad, you're going to get it.  It always amazes me that the very same idiots and brain-dead cunt-knuckles who cry about supposed "rape culture" in the USA are the very same ones who want to import millions of people from a society that actually has a rape culture alive and thriving.

They do it in their country.  They will do it in ours.  It's that simple.

UPDATE:  Here's a bit more on the diversity of Cologne.

One of the first victim's to speak out, an 18-year-old named only as Michelle, described being surrounded by a group of 30 'angry' men who groped her and her friends then stole their belongings as they fled.

Witnesses and police have described men working in 'coordinated' groups to grope women who were unable to escape, while two women reported they were raped.

Michelle's shocking testimony comes as the city's own council today admitted its town centre was now a 'no-go area' for women, while it has emerged similar attacks occurred the same night across Hamburg and Stuttgart.

And while German media and authorities stand accused of covering up previous incidents to avoid stoking tensions, there are fears the upcoming carnival celebrations in Cologne will see a repeat of the brazen attacks.


What the hell made Germany think that their soil was so magic that they could import these muslims from the Middle East and all of the sudden they would be law-abiding Germans, anyways?

When the Ragin' Mrs. walks in to your shop and asks about a hard case for a compound bow, and you show her a $300 model, and she says "That's out of my price range", the correct response is "Well, what's your price range?".

Do not continue to show her case after case that we cannot afford, especially when she makes it known the price range she is looking for.

Bottom line - Gander Mountain had a Plano hard case for $40.  Add in $20 for two-day shipping, and we're still $100 below the lowest price case you offered.
Posted by Ragin' Dave at 23:03 No comments:
Email ThisBlogThis!Share to TwitterShare to FacebookShare to Pinterest
Labels: Retail Rigamarole

Dashed out the door in time to make it to work.  Sorry 'bout the lack of free ice cream.
Posted by Ragin' Dave at 20:22 No comments:
Email ThisBlogThis!Share to TwitterShare to FacebookShare to Pinterest

Get some.  And buy ammo.  Obama ain't just waiting around, he's going to issue some executive order or another, and let's face it - the GOP doesn't have the balls, the spine or the brain to oppose him on it.

They've already proven that in spades.
Posted by Ragin' Dave at 18:42 No comments:
Email ThisBlogThis!Share to TwitterShare to FacebookShare to Pinterest
Labels: 2A

I'm well enough to go back to work, unfortunately.  But the cold has moved out of my head and into my chest.  I am a basso profundo for today.  Talking on the phone is going to be joyous.
Posted by Ragin' Dave at 09:05 No comments:
Email ThisBlogThis!Share to TwitterShare to FacebookShare to Pinterest
Labels: Personal crap
Newer Posts Older Posts Home
Subscribe to: Posts (Atom)