My first day off in a long time

And I'm not quite sure what to do with myself.

James Comey exposes the kind of sleazy fuckstick he was, and is.

While writing a novel-length "briefing" that's anything but brief.  I won't re-hash Powerline's summary, you can go read their thoughts at the link.  I will say that Comey was Clinton's dog from the word "Go", and nothing in his written testimony will make you think otherwise.  Trump should have fired him on January 21st.

Updated to add:  Comey has been a Democrat Party Bitch for years.

But given Comey’s history of secretly colluding with Democratic officials to craft a disputed narrative that makes everyone but himself look awful in order to oust a top Republican who didn’t sufficiently kowtow to Comey, there’s little reason to assume events transpired exactly the way Comey and his friends allege, especially given that both Comey and Bharara have rather obvious axes to grind on the matter. After all, Trump is the reason neither of them currently has a job. In light of Comey’s history of twisting private conversations and events, it’s probably a good idea to take anonymous leaks from him and his friends with a grain of salt.


So if you want to know why Hillary Clinton is still free, instead of being locked up in jail awaiting trial like any other American would be, it's because James Comey's loyalty is first and foremost to the Democrat Party.  Which means it's not to America.
Posted by Ragin' Dave at 03:46 No comments:
Email ThisBlogThis!Share to TwitterShare to FacebookShare to Pinterest
Labels: Backstabbing Shitweasels, Criminal Behavior, Dirty Fucking Hippy Losers

When looking for those who would commit violence, start with the violent, mask wearing fascists and thugs of the Left.

The Left is so far into either A) delusion, B) outright lying or C) both, that they can't look at what side is wearing masks over their faces and determine who is acting in good faith and who is acting in bad.

Here's a hint, just in case you're a "progressive" leftist, which means that you're so stupid you might actually have to be informed of this basic bit of knowledge:  If you look around, and you're surrounded by people who refuse to show their faces, waving bats, sticks and various other weapons, throwing bottles, bricks and rocks, then you are the fascist attempting to shut down free speech.
Posted by Ragin' Dave at 03:44 2 comments:
Email ThisBlogThis!Share to TwitterShare to FacebookShare to Pinterest
Labels: Dirty Fucking Hippy Losers, Fuck the Fucking Fuckers, LeftHate, LeftHypocrisy

I'm going to do what this guy does

After all, why take chances when you have an example like this?  At age 111, America's oldest Veteran is still smoking cigars, drinking whiskey.

Hell, if I make it to 80 I'll be ecstatic.
Posted by Ragin' Dave at 03:41 1 comment:
Email ThisBlogThis!Share to TwitterShare to FacebookShare to Pinterest
Labels: Cool stuff

This is why CNN is Fake News

As you watch the video, you can see that this is not a bona fide demonstration that CNN observed and reported on. Rather, the entire event–one could say, the pitifully small event–is being stage-directed by CNN for its cameras, to advance CNN’s narrative.

CNN is Fake News.  Always has been.  Probably always will be.

Posted by Ragin' Dave at 04:39 No comments:
Email ThisBlogThis!Share to TwitterShare to FacebookShare to Pinterest
Labels: Fake News

Europe has been importing its own death for far too long. 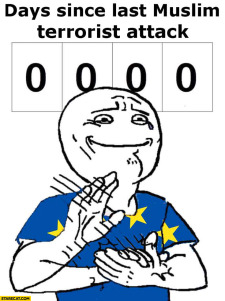 Call me when they start shooting the bastards.  That'll be newsworthy.
Posted by Ragin' Dave at 03:30 No comments:
Email ThisBlogThis!Share to TwitterShare to FacebookShare to Pinterest
Labels: Islam
Newer Posts Older Posts Home
Subscribe to: Posts (Atom)