Talk amongst yourselves!
Posted by Ragin' Dave at 15:10 No comments:
Email ThisBlogThis!Share to TwitterShare to FacebookShare to Pinterest
Labels: I'm busy so bugger off, Military Life

Well, it's not gout

My doc did a uric acid test, and the numbers came back smack in the middle of "normal".  Which is good news and bad news.  Good because I don't have gout, and bad because this means my foot problem is something that will most likely require surgery.

Getting old sucks.
Posted by Ragin' Dave at 15:46 1 comment:
Email ThisBlogThis!Share to TwitterShare to FacebookShare to Pinterest
Labels: Growing old ain't for the young

So my foot acted up again.  Went to the doc, had a blood test drawn, so I should find out soon if we can rule out gout, or if I'm going to be forgoing all the foods I love.  Asparagus?  Spinach?  Beef?  WHISKEY????

On the other hand, I've injured this foot multiple times, so if it's an injury it's probably an accumulation of all the various crap I've done to myself through the years.  I jacked it up good twice in LA.  The second time I actually heard all the bones *pop* as my foot came down on a rock and damn near folded on itself.  The x-ray showed either tiny bone spurs or calcifications in the joint that's causing me issues.  Prior to that I strained the tendons/ligaments so badly I couldn't walk for a week, and couldn't run for a month and a half.

On top of that, add in all the crap I've done in the Army.  Apparently I have plantar fasciitis on top of everything else going on with the feet.  The nurse kept poking my tendon at the bottom of my foot and saying "That shouldn't be sticking out like this."

Bottom line - no matter what the diagnosis is, I'm probably done with any serious running for a while.  Maybe forever.  Which sucks, because I like running.  Hopefully I'll find out from the doc about the test tomorrow.  If it's not gout, I'm going to an orthopedist to see what can be done.  Until then I'm just limping along.

You know the reason people can retire after twenty years in the military?  Because most folks can't really go beyond that.
Posted by Ragin' Dave at 21:15 4 comments:
Email ThisBlogThis!Share to TwitterShare to FacebookShare to Pinterest
Labels: Growing old ain't for the young

And there was much weeping and wailing and gnashing of teeth.  Loud were the cries of the fans, who mourned and donned sack-cloth and covered themselves with ashes.

There's going to be tributes, and everybody is going to cry about how they loved x character best.

Look, the guy was 95.  He was rich.  Not rich as in "I have a nice house and a fancy car" rich, but rich as in "he would never have been able to spend all the money his comic book characters made for him" levels of wealth.  He lived a good life, and died at an age that I won't ever see thanks to my genetics.  I don't want to see another outpouring of grief for a celebrity who died.  Why can't we just celebrate a good life without all the hysterics?
Posted by Ragin' Dave at 06:38 2 comments:
Email ThisBlogThis!Share to TwitterShare to FacebookShare to Pinterest
Labels: Modern Life

So what they're really saying is that Muslims are incapable of existing in Western Civilization.

Britain has rejected an appeal for asylum from Asia Bibi, the Pakistani Christian acquitted of blasphemy last week who is under the threat of death from Islamic leaders who struck a deal with her government to block her exit.

The British government said allowing Bibi to enter the U.K. would cause unrest among Muslims, according to an advocate, the Huffington Post reported.

Wilson Chowdhry, chairman of the British Pakistani Christian Association, said he’s been led to believe that the British government “had concerns that her moving to the UK would cause security concerns and unrest among certain sections of the community and would also be a security threat to British embassies abroad which might be targeted by Islamist terrorists.”


The proper response to these inbred, pedophile-worshipping rapists and barbarians is "We are bringing her here because it's the right thing to do.  If you try to stop us, you will be shot like the dogs you are."

And quite frankly, Britain is done.  They're finished.  They don't have the strength necessary to defend themselves from the Islamic infection they gave themselves.  They refuse to defend the girls and women that muslims rape and use as sex slaves as in Rotherham.  They refuse to grant asylum because they know the muslims they have allowed in will riot and kill and loot and maim, and they're unwilling to do anything about it.

If you've ever wanted to see Britain, go do it now, because soon it'll be nothing but another Jihadi shithole.
Posted by Ragin' Dave at 08:59 No comments:
Email ThisBlogThis!Share to TwitterShare to FacebookShare to Pinterest
Labels: A Dumpster Fire Being Dropped Into A Septic Tank, Islam, Modern Life, Nucking Futs

Saw this. Stole it. Posting it here. 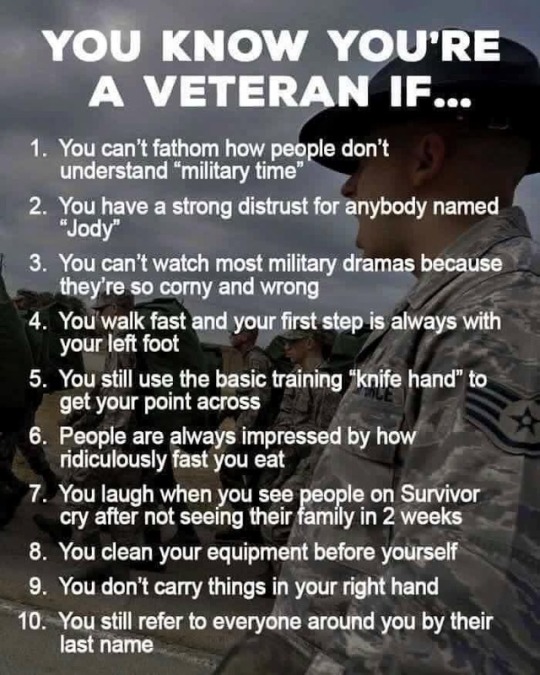 I'm thankful to every vet who came before me that gave me the opportunity to do what I do now.

Vets might not be the most genteel people.  War is fought by rough men.  But I'd take a football field of vets for company over a roomfull of Hollywood liberals any day of the week.

In related news:  The Birdsong of Peace.  I wonder how many Yanks broke down when they heard the guns go silent, and the birds start to sing.
Posted by Ragin' Dave at 06:57 No comments:
Email ThisBlogThis!Share to TwitterShare to FacebookShare to Pinterest
Labels: Military Life
Newer Posts Older Posts Home
Subscribe to: Posts (Atom)