If it has come down to this

Then it is LONG past time we started responding in kind.

An upscale mall in Nairobi, Kenya was attacked on Saturday when gunmen threw grenades and opened fire on patrons. At least 25 have been killed and 50 wounded, but those numbers are expected to grow.


The Westgate Mall is located in the affluent Westlands neighborhood and frequently visited by the wealthy and foreign workers, especially on the weekends. It houses many popular stores like Nike and Adidas. Many security agencies listed it as a popular target for terrorists. It is important to note the mall is under Israeli ownership because witnesses told police the gunmen said non-Muslims were their targets.
Elijah Kamau, who was at the mall at the time of the midday attack, said that the gunmen made a declaration that non-Muslims would be targeted.


"War is the remedy that our enemies have chosen, and I say let us give them all they want." -- General William Tecumseh Sherman

People always argue that it's just the "extremists", the "1/10/15/20%" that commit these atrocities, and the rest of the pedophile-worshipers "just want to get along" but let's compare and contrast how the last time a non-Muslim committed any sort of public murderer. It is IMMEDIATELY condemned in the strongest of language by everyone on both sides of the argument, and every effort is made to bring any surviving murderers to what justice can be reached within our ability. Whereas this crime? Or the last hundred time Muslims targeted and murdered non-Muslims?

Not. A. Fucking. Peep. from the 50+ Muslim countries, and some of the more outrageous ones will actively shelter the criminals from justice. That isn't "just wanting to get along", that is actively aiding and abetting after the fact, making them fully complicit in the crimes, and deserving of every bit of the justice that needs to be delivered. Even those who don't say anything are passively giving their consent. If it was really just the minority causing trouble, then those in the so-called "peaceful" majority would be preventing, or at the very least, dropping a dime to potential targets. Nothing.

"Facts do not cease to exist because they are ignored." -- Aldous Huxley

It is time to start making this kind of attack so unattractive that it will cease to be an option, and the ONLY way to do that is to send down some Shock and Awe, with a heaping side dish of Wrath Of God, and a little Wailing and Gnashing Of Teeth for dessert.

Mecca - at 21°25′0″N 39°49′0″E, for those counting - would be a nice target for an ICBM or cruise missile or B-2 bomber, and precisely zero chance of hurting any innocents. Hit 'em during Ramadan, and turn the whole fucking district into a heap of rubble surrounded by radioactive glass.

"Lord, protect me from my friends and those who pretend to be my friends. I know how to take care of my enemies." - Unknown

Posted by Drumwaster at 16:39 2 comments:
Email ThisBlogThis!Share to TwitterShare to FacebookShare to Pinterest

I don't think I can express just how awesome it is

That ESPN is doing their GameDay broadcast from Fargo, ND.

It just is.  Don't question it.
Posted by Ragin' Dave at 09:45 No comments:
Email ThisBlogThis!Share to TwitterShare to FacebookShare to Pinterest

Yes, these are college students in California

And as Ace puts it:  I don't know how you defeat weapons-grade stupid like that.

This is what I'm surrounded by, day after day.  These are the people that I deal with, day after day.
Posted by Ragin' Dave at 08:19 3 comments:
Email ThisBlogThis!Share to TwitterShare to FacebookShare to Pinterest
Labels: General Stupidity, Modern Life

Opened up the local fishwap yesterday

And the first story on page A-1 is a sob story about how poverty in the Southland is growing.  And of course, no sob story is complete without it's protagonist, so they start off the story with this:

Tisha Morrison, 46, of Pacoima found herself taking refuge in the Los Angeles area after her Louisiana home was destroyed by Hurricane Ike in 2008.

Today, the single mother of eight, who lost her part-time job at a shelter in May after it closed, struggles to stretch her roughly $1,225 in welfare and food stamps that she receives each month to care for her and her five young children who live at home.


The emphasis up there is mine, by the way.  Just in case you missed it.

Where's daddy in all of this?  Or, as is most likely the case, where are the daddies?

And please spare me the sob stories of "Well, what if she was married, and the husband died?"  Then the husband would have been included as at least a side note in this little sob story.  But since there isn't a single mention of a husband at all, I'm willing to bet my entire paycheck that there is no husband, never was a husband, and never will be a husband.

This woman is on the government dole because she made the choice to sleep around and have children out of wedlock.  And now everyone else is paying for her choices.  THAT is why the welfare system needs to be done away with.

We will never get rid of poverty by just handing money over to people who continually fuck up their own lives.  We can only reduce poverty by refusing to protect people from the consequences of their own actions.  Then, and only then, will we be able to actually help the folks who had a run of bad luck and need a hand up.

Until we refuse to just give people money because they've fucked up their lives, then the number of people in "poverty" will continue to grow.  Things you subsidize, you get more of.  Things you tax, you get less of.  We've been subsidizing poverty for decades now, and it ain't gone away at all.  It's grown.  Time to try a different tact.
Posted by Ragin' Dave at 10:13 2 comments:
Email ThisBlogThis!Share to TwitterShare to FacebookShare to Pinterest
Labels: Modern Life, Nucking Futs, The Welfare State

I suppose I should say "lockstep Democrats", and they mean the same thing, but "scumbags" seem to be a better choice.

I would like to point out the names of the fucking scumbags who walked out of a committee meeting, rather than hear the testimony of those most closely affected. To be more specific, a meeting of the House Oversight and Government Reform, which had been receiving testimony from family members of those killed more than a year ago at the consulate and compound in Benghazi, Libya.

During the second portion of a House Oversight and Government Reform hearing about Benghazi Thursday on Capitol Hill, the majority of Democrats on the Committee left the room and refused to listen to the testimony of Patricia Smith and Charles Woods. Ms. Smith is the mother of Sean Smith, an information management officer killed in the 9/11 Benghazi attack. Charles Woods is the father of Navy SEAL Tyrone Woods, who was also killed.


I gathered the entire membership of the committee from this page and since the only two scumbags who stayed are mentioned by name (Ranking Member Elijah Cummings and Rep. Jackie Speier), it is easy to winnow down the names of the fucking scumbags who either walked out, or didn't bother to show up in the first place.


I would have locked the door behind them, and held a few key votes right away. If any of these are your representative, you have my condolences, and my strongest suggestion that you get them on the horn and demand an accounting.

Of course, they have already received their marching orders from Broomstick One regarding Benghazi:


Scumbags, one and all.
Posted by Drumwaster at 19:43 3 comments:
Email ThisBlogThis!Share to TwitterShare to FacebookShare to Pinterest

On going running this morning.

Hit the alarm clock, turned it off, and then snuggled with the Mrs. for a couple of more hours.  I can run later.  Time with my wife is at a premium.
Posted by Ragin' Dave at 13:50 No comments:
Email ThisBlogThis!Share to TwitterShare to FacebookShare to Pinterest
Labels: Personal crap

Every Day in Los Angeles

Gives me another reason or example of why this shithole just needs to fall into the ocean and drown.
Posted by Ragin' Dave at 22:54 3 comments:
Email ThisBlogThis!Share to TwitterShare to FacebookShare to Pinterest 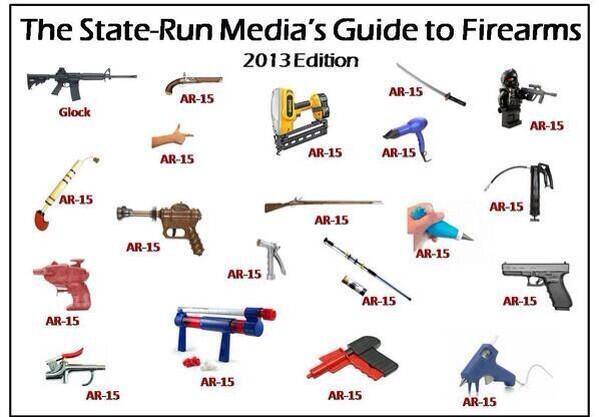 It would be even funnier if it weren't so true.
Posted by Ragin' Dave at 11:38 No comments:
Email ThisBlogThis!Share to TwitterShare to FacebookShare to Pinterest
Labels: 2A, The Media is not your friend

Obama just turned American into an arms dealer for Al-Qaeda.

President Obama waived a provision of federal law designed to prevent the supply of arms to terrorist groups to clear the way for the U.S. to provide military assistance to "vetted" opposition groups fighting Syrian dictator Bashar Assad.

Some elements of the Syrian opposition are associated with radical Islamic terrorist groups, including al Qaeda, which was responsible for the Sept. 11 attacks in New York, Washington, D.C., and Shanksville, Pa., in 2001. Assad's regime is backed by Iran and Hezbollah.

The president, citing his authority under the Arms Export Control Act, announced today that he would "waive the prohibitions in sections 40 and 40A of the AECA related to such a transaction."


So that wingnuthead motherfucker is claiming that arming TERRORISTS is essential to American security.

Destroy it. Burn the Rubble. Salt the earth it stood on.

And then fire each and every single person who allowed this to happen.

I've downloaded it for posterity, although it doesn't say just what textbook it is, or where it came from, or where it's being used. 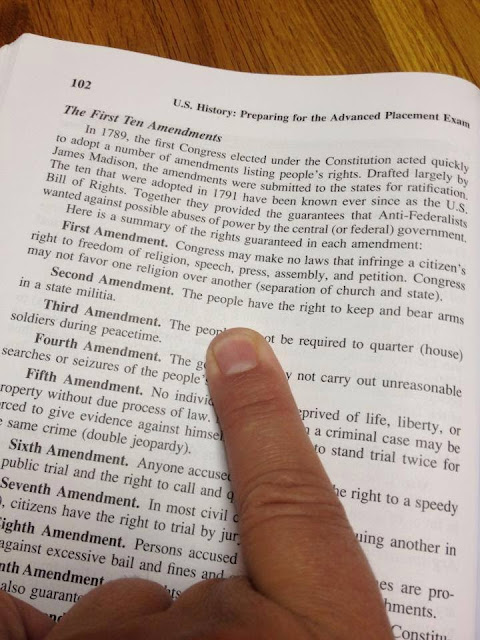 Posted by Ragin' Dave at 09:32 1 comment:
Email ThisBlogThis!Share to TwitterShare to FacebookShare to Pinterest
Labels: We need more tar and feathers

My post about music, the smoking hot alto with the voice of a goddess doing her little wiggle thang, got a grand total of 36 page views over the weekend.  Most of my political posts got less than that.

My post with the bewbs, that I just put up today?  38 already, and more to come.

Any takers?
Posted by Ragin' Dave at 19:56 3 comments:
Email ThisBlogThis!Share to TwitterShare to FacebookShare to Pinterest
Labels: Nucking Futs

But I'm at the point of slamming my head into a wall while I do the five or six different jobs and tasks that I need to do.  So....