You get the government you deserve

And when you elect a fucking Nazi like Obama, you get a Gestapo Department of Justice, don't you?

In its latest effort to protect followers of Islam in the U.S. the Obama Justice Department warns against using social media to spread information considered inflammatory against Muslims, threatening that it could constitute a violation of civil rights.

Oh, and for the record, Islam is a "religion" of backwards, pedophile, 13th century barbarians that is inconsistent with modern civilization.
Posted by Ragin' Dave at 16:43 2 comments:
Email ThisBlogThis!Share to TwitterShare to FacebookShare to Pinterest
Labels: Government Thugs, Nucking Futs, Obama the Nazi

The Possible Future of Health Care in America

No insurance.  Cash on the barrel.  Cheaper, better health care.

Dr. Michael Ciampi took a step this spring that many of his fellow physicians would describe as radical.

The family physician stopped accepting all forms of health insurance. In early 2013, Ciampi sent a letter to his patients informing them that he would no longer accept any kind of health coverage, both private and government-sponsored. Given that he was now asking patients to pay for his services out of pocket, he posted his prices on the practice’s website.

But the decision to do away with insurance allows Ciampi to practice medicine the way he sees fit, he said. Insurance companies no longer dictate how much he charges. He can offer discounts to patients struggling with their medical bills. He can make house calls.

“I’m freed up to do what I think is right for the patients,” Ciampi said. “If I’m providing them a service that they value, they can pay me, and we cut the insurance out as the middleman and cut out a lot of the expense.”

If people actually knew what their health care cost, and how much insurance pays the doctors, and how much of a financial burden insurance and government regulations are to the health care industry, they might just begin to understand what's wrong with the health care system in this country.  I expect a lot more doctors to go this route and Obamacare begins to destroy the current health care system.  As more doctors practice under the bootheel of the government, more and more of them are going to try to find a way out.

More power to 'em.
Posted by Ragin' Dave at 22:13 1 comment:
Email ThisBlogThis!Share to TwitterShare to FacebookShare to Pinterest
Labels: Government Health Care will kill you, THIS is America


So says this essay, which I can't find too many things to argue with.  It's all about putting on that facade, to make women find interest in you.  Or men, I guess, although generally it's women who care about how much a guy makes, not the other way around.

Now....  let me ask this question - exactly what kind of a mate are you trying to attract if you're putting out the false flag of financial force?

Back when I lived in Seattle, I listed to the Tom Lykis show quite a bit.  And his stated goal was to get men laid.  Not exactly something to aspire to if you have morals, but still....  millions of listeners, and his advice got 'em laid, so Lykis obviously had something going.  And just about every bit of advice he gave with his "Lykis 101" hour revolved about using women's base instincts against them to get into their pants.  One of the tips he used to give was to withdraw as much money at one time as you can from an ATM, and then put the money right back into your banking account.  BUT....  you kept the receipt from your withdrawal in your wallet, and at just the right moment, you "accidentally" drop it where the young lady you wish to get intimate with will see it.

Worked like a charm, from what I could see.  I was dating the Ragin' Mrs. at that point, so I didn't go out clubbing or trying to get laid, but Lykis had a huge following in Seattle, and his pointers worked.  They worked because there are enough women out there who allow those base instincts to control them, and that allows men to control the women.

If you're attracting women by putting out a show of wealth, guess what kind of women you're going to attract?  Hmmmmmm.......

As for me, the Ragin' Mrs. married me when I was dirt poor, so I don't have to worry about her trying to get my cash.  Hell, my goal has been to improve our situation every year, so that by the time I retire we'll be richer than we ever were.
Posted by Ragin' Dave at 19:08 No comments:
Email ThisBlogThis!Share to TwitterShare to FacebookShare to Pinterest
Labels: Modern Life

I was going through the comments today, and checked the spam filter for the first time in months - found a bunch of your comments in there.  I don't know why they were labeled as spam, but I checked them as "Not Spam" and set them free.

Sorry 'bout that.  Again, don't know why it happened, but it seemed to be only your comments in there.
Posted by Ragin' Dave at 12:28 No comments:
Email ThisBlogThis!Share to TwitterShare to FacebookShare to Pinterest
Labels: Blog Stuff 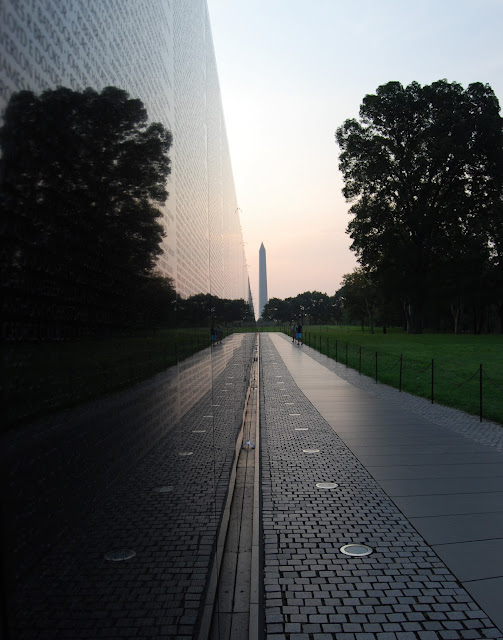 Click for full size.  I took this while in Washington D.C. a little over a year ago, having the honor of being the Color Guard at a reunion of WWII vets.

Everyone has seen the photos.  But I don't think there is a single photo out there that can convey what that monument conveys in person; panel upon panel of black stone, covered with names, seemingly stretching on forever.

I know I will.

UPDATE:  It looks like Blogger shrunk the photo, so there is no full size for the clicky-clicky.  If you do want the full sized photo, just email me and I'll send it to you.
Posted by Ragin' Dave at 06:00 1 comment:
Email ThisBlogThis!Share to TwitterShare to FacebookShare to Pinterest
Labels: Photo Time

Songs that make me drive too fast

It's like someone pushed my foot on the accelerator when this song comes on the radio.

Maybe it's just me.
Posted by Ragin' Dave at 10:00 No comments:
Email ThisBlogThis!Share to TwitterShare to FacebookShare to Pinterest
Labels: Real Music

Be the kind of person who, when your feet hit the floor in the morning, the Devil says "Crap!  He's awake!"

It was on a sticker I saw.  Don't know if I got the wording right, and don't remember where I saw it.  It just popped back into my head five minutes ago.  My brain is funny like that.
Posted by Ragin' Dave at 08:00 No comments:
Email ThisBlogThis!Share to TwitterShare to FacebookShare to Pinterest
Labels: QotD
Newer Posts Older Posts Home
Subscribe to: Posts (Atom)