Despite that pathological liar Susan Rice's claims to the contrary.

If this strike was arranged to avoid hitting sarin storage facilities, the question arises: did the Obama Administration know that such depots still existed after its “historic” deal that supposedly removed all Syria’s chemical weapons?

The signs point to yes.

Hey, remember when that pathological liar Susan Rice testified that Obama had convinced Assad to give up his chemical weapons?

So now we're starting a war with Syria?

There is no victory in Syria.  There is no "winning".  We can't "win so big" with Assad, because beating Assad means that Terrorist Group A comes to power, assuming that Terrorist Group B doesn't kill them off first and take the throne.  There is not a single group of people in Syria who are our pals.  Any of them in control of the country is a bad idea.  Helping one over the other will only mean that one group hates us slightly less, but they'll still send terrorists over to blow up Americans when they can.  And the other groups will probably swear blood feud because we didn't give their terrorists priority over Terrorist Group A's terrorists.

You want to help Syria?  You build refugee camps outside of the country and make sure that the insanity of Syria stays in Syria.  Other than that, you build a wall around the country, seal it up and wait for the various terrorists, dictator-wanna-be assholes and the actual dictator to kill each other.  And when there's only one or two people left you tell them "If any of this shit show makes it to our shores, we will bomb your country until it's nothing but rubble from one side to the other.  And then we'll bomb it to make the rubble bounce."
Posted by Ragin' Dave at 03:45 3 comments:
Email ThisBlogThis!Share to TwitterShare to FacebookShare to Pinterest
Labels: Nucking Futs, World Affairs

Nice to see someone fighting back

Fauxcahontas Warren (aka Lie-a-watha) goes silent after reports show she only pays women 71% of what she pays men.

Sen. Elizabeth Warren (D., Mass.) failed to acknowledge Equal Pay Day for the first time in her Senate career after it was reported on Tuesday that women working in her Senate office earned just 71 percent of what was earned by men.

Warren has used Equal Pay Day, which fell on April 4 this year, in years past as an opportunity to speak out on the gender pay gap. Last year she took to the Senate floor to call Equal Pay Day a "national day of embarrassment" and pledged to continue her "fight" until the pay gap was erased. She gave similar statements on Equal Pay Day in 2015, 2014, and 2013, her first year in the Senate.

This year, Warren was the only female Democratic senator who ignored Equal Pay Day entirely, and it was not due to a lack of opportunity.


The fight against ProgNazis and other Left Fascists isn't going to be like sniping them from afar and walking away.  It's a knife fight.  Get dirty.  Expect to get cut.  Get in, get close, and stab them until they stop moving.
Posted by Ragin' Dave at 03:58 No comments:
Email ThisBlogThis!Share to TwitterShare to FacebookShare to Pinterest
Labels: Hypocrisy thy name is Democrat

It only takes one mouth-breathing asshat to screw up traffic

So what do you get when every other car on the road is being driven by a drooling fuckwit with a phone implanted to the side of their face?

You get Richmond, VA and the surrounding areas, apparently.  At least, that's what I see from the seat of my motorcycle.
Posted by Ragin' Dave at 03:52 4 comments:
Email ThisBlogThis!Share to TwitterShare to FacebookShare to Pinterest
Labels: Why Can't People Drive?

Actually, working all week.  Today is the day when I didn't have time to load anything last night, and don't have time this morning.

Blogroll is to the right.
Posted by Ragin' Dave at 04:07 No comments:
Email ThisBlogThis!Share to TwitterShare to FacebookShare to Pinterest
Labels: Blog Stuff

Sent to me by a buddy


Who happens to know a whole load of people named "Dave", so they all have some superlative (or explicative) attached to their name.  There's the guy he calls "Fucking Dave", and I have earned the moniker of "Jesus Dave".

It's a long story.  One that I might tell later if I'm plied with enough whiskey.

But anyway, last night he shoots this to me on my phone: 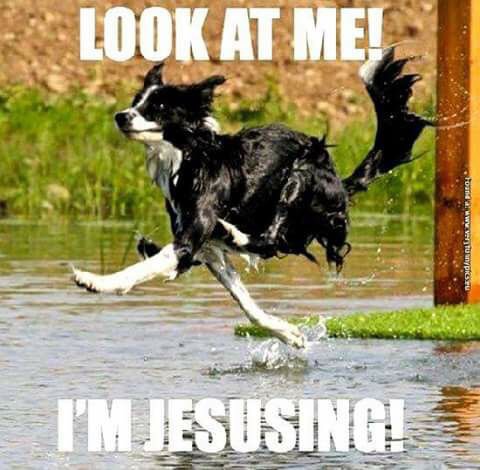 It made me giggle.  Just a bit.
Posted by Ragin' Dave at 04:09 No comments:
Email ThisBlogThis!Share to TwitterShare to FacebookShare to Pinterest
Labels: Random Crap

My wife is making radish kimchee

I say "making" instead of "made" because apparently it's a process that involves several days of fermentation.

This ought to be interesting.  I do love Korean food.
Posted by Ragin' Dave at 03:52 No comments:
Email ThisBlogThis!Share to TwitterShare to FacebookShare to Pinterest
Labels: Personal crap

The damage will never be undone

And one of the reasons is that the Marxist press, aka the Obama Sluts and Stenographer Pool, don't want the damage undone.

What’s striking about the Times story is the spin it took. Trump had previously claimed he had been “wire tapped” (quotation marks in his original Tweet), leading to media screams that he prove it. The Times’ own reporting proves that President Trump and his associates were spied on.

The Times, rather than admit Trump had been vindicated, instead focused its attention on the question of who leaked the reports to Nunes:


There have been multiple admissions from Obama admin officials that they spied on Trump and his team.  From some reports, that spying was going on before Trump won the nomination, and continued up until January 20th.


This reporter has been informed that Maggie Haberman has had this story about Susan Rice for at least 48 hours, and has chosen to sit on it in an effort to protect the reputation of former President Barack Obama.

Gotta add this from Powerline:

When Donald Trump succeeded Barack Obama as president, they went from a gaggle of slobbering groupies to a pack of baying hyenas. Some people approve of the head-snapping, 180-degree reversal, while others don’t. But everyone knows it happened.

I think the description "a gaggle of slobbering groupies" is incredibly kind to the media.

Posted by Ragin' Dave at 05:32 No comments:
Email ThisBlogThis!Share to TwitterShare to FacebookShare to Pinterest
Labels: Obama the Nazi, The Media is not your friend
Newer Posts Older Posts Home
Subscribe to: Posts (Atom)