Mea Culpa.  I was out doing family stuff.  Also, art gallery stuff.  There's a Norman Rockwell exhibit in Spokane that the Ragin' Mother wanted to go see, so we went.  I saw one of the Saturday Evening Post covers that I think I'm going to have to buy. 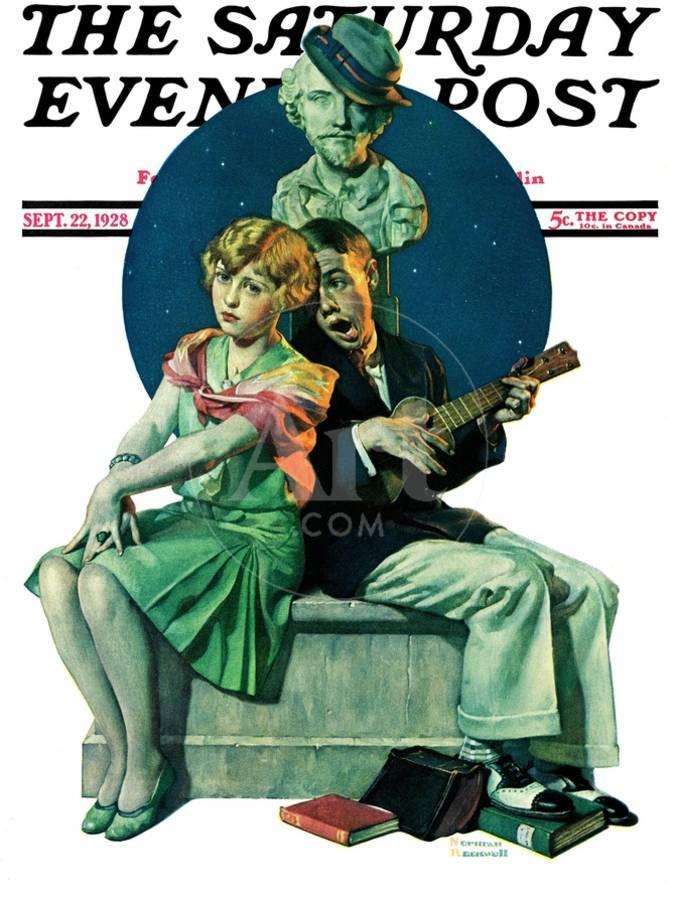 Understand that I play the ukulele, and my dear wife puts up with my yowling and yodeling with much the same look as that young lady in the art up there.  So when I saw this, I just started giggling.  And then I grabbed the Ragin' Mrs and showed it to her, and she started giggling as well.

Your regularly scheduled posts should start back up on Monday.
Posted by Ragin' Dave at 22:07 No comments:
Email ThisBlogThis!Share to TwitterShare to FacebookShare to Pinterest
Labels: Musings and Meanderings, Random Crap

I blame my dad, who took me to Sumo matches when I was a yoot.
Posted by Ragin' Dave at 16:52 1 comment:
Email ThisBlogThis!Share to TwitterShare to FacebookShare to Pinterest
Labels: Personal crap

Sitting on a porch, enjoying a cigar

In the past few nights, I've listened to coyotes howl, turkeys roosting, deer doing that nose-whistle thing they do, and I've seen elk tracks, moose tracks, and of course the random raccoon and porcupine tracks.

Every time I think about driving back to the city, I cringe a little.
Posted by Ragin' Dave at 16:30 No comments:
Email ThisBlogThis!Share to TwitterShare to FacebookShare to Pinterest
Labels: Personal crap

Best quote:  "Let me remind the Virginia Legislature that the people who hid Anne Frank were breaking the law, and the people who killed her were following it."

Damn!
Posted by Ragin' Dave at 17:07 No comments:
Email ThisBlogThis!Share to TwitterShare to FacebookShare to Pinterest
Labels: Real Americans


Posted by Ragin' Dave at 00:00 No comments:
Email ThisBlogThis!Share to TwitterShare to FacebookShare to Pinterest
Labels: Gimme that Old Thyme Religion

Every time a WokeScold cries, an angel gets its wings!

So Boeing's Starliner's failure is being touted as some grand horrible failure that will end the world or something.

Boeing's new Starliner spacecraft landed in the New Mexico desert on Sunday morning — days after the NASA mission failed because the capsule's clock was improperly set, and the capsule ended up in the wrong orbit.


Yes, things didn't go quite right, but the spacecraft landed.  It was recovered.  Folks, space flight is hard.  It's not easy to do what we're trying to do.  And in case anyone wants a little context, the crew of the Apollo 1 mission died.  We've had two Space Shuttles disintegrate; one on take off, and one on landing.  The Ruskies had space craft blow the fuck up with people inside.

So we got a spacecraft that made orbit, landed and was recovered but didn't quite accomplish what people had hoped?  Dude, I'll take it.  Learn from the mistakes and move on to bigger and better things.  Finally.
Posted by Ragin' Dave at 01:00 3 comments:
Email ThisBlogThis!Share to TwitterShare to FacebookShare to Pinterest
Labels: It's like science!

The Fourth Sunday of Advent

The oldies are the good ones.