A thread on why nobody wants to join the military

And all I can say is "pretty much, yeah". 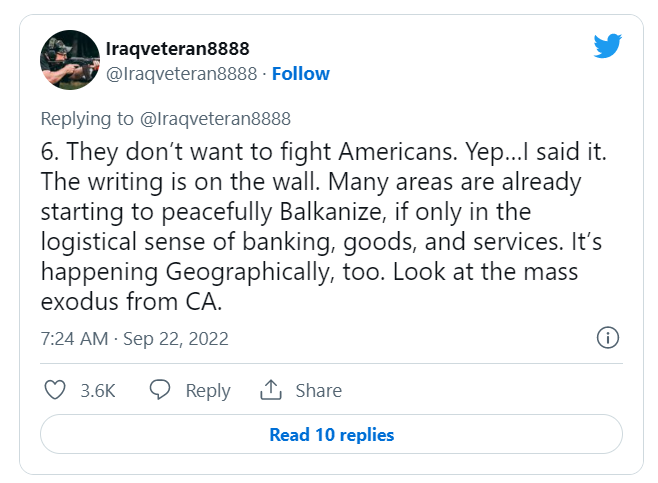 The bottom line is that the people who join the military are, by and large, people who love this country and want to serve it in some form or fashion.  Oh sure, you've got the whole political spectrum in the ranks, but as a general rule, it's patriotic conservatives who sign up.

So do you really think they're rushing to sign up under a drooling Chinese hand puppet and Marxist shitstains in the Pentagon?

Do you think all their veteran family members are pushing them to join?

I know of one friend who's son is now in the Marines.  But far, far more of my acquaintances are telling their kids "Hey, why don't you hold off for a moment?"  We can all see the writing on the wall.

Posted by Ragin' Dave at 10:05 No comments:
Email ThisBlogThis!Share to TwitterShare to FacebookShare to Pinterest
Labels: Anti-Military

Mea culpa.  I was kinda busy for most the day.

Posted by Ragin' Dave at 09:44 No comments:
Email ThisBlogThis!Share to TwitterShare to FacebookShare to Pinterest
Labels: Blog Stuff

By the way, the Body Mass Index is total bullshit.

It doesn't take into consideration your body shape, your workout regimen, muscle vs. fat, it's just your Weight and Height.

This makes much more sense.

New research suggests that waist-to-hip ratio, and not body mass index is a better measure of healthy weight -- and may predict early death better than BMI.

The researchers urge using the new method to replace BMI, which the Centers for Disease Control and Prevention has called "an inexpensive and easy tool" because that calculation requires only a person's height and weight.

But researchers said the waist-to-hip ratio also is a "quick and easy measurement," calculated by dividing waist circumference by hip circumference.

Their work is being presented this week at the annual meeting of the European Association for the Study of Diabetes in Stockholm.

I've been "overweight" by Army standards since 1997.  That was when I was told that I needed to start working out and build some mass.  So I did.  PFC Ragin' Dave went to the gym and started lifting weights.  As it turns out, my physiology is really, REALLY good at putting on muscle mass.  I went from 172 to 189 in a matter of months.  My waist stayed the same size.  And the Army told me that I was overweight.

For reference, the Mark 19 Automatic Grenade Launcher weights 77 pounds unloaded.  And I could haul ass with that fucker, get it on the truck, mount it and get it ready to rock and roll without anybody else helping.

Overweight?  Bullshit.  So lets do away with the BMI and other bullshit tests to see if someone is overweight.

This whole "NyQuil Chicken Challenge" that people are worried about

Folks, it's called "Natural Selection".  Sometimes you just have to let the stupid people die off.

Posted by Ragin' Dave at 15:51 No comments:
Email ThisBlogThis!Share to TwitterShare to FacebookShare to Pinterest
Labels: Random Crap

And everybody fucking knew it.

A WhatsApp exchange between business associates involved in the CEFC deal  was provided to Committee Republicans by a whistleblower, and it confirms Joe Biden’s participation in the Biden family’s influence peddling operations. On May 20, 2017, Biden associate, James Gilliar, wrote in an encrypted correspondence to another business partner: “Don’t mention Joe being involved, it’s only when [you] are face to face, I know [you] know that but they are paranoid[.]”

According to a whistleblower who facilitated the CEFC transaction, Joe Biden was designated an “obfuscated partner” in the business with the Chinese, and “Hunter Biden held 10 percent of the joint venture on behalf of his father to hide Joe Biden’s participation in the plan.”

Joe Biden is a drooling Chinese Hand Puppet.  He's been compromised since the first day they illegitimately installed him in the Oval Office.

Oh, and all of this was also on Hunter Biden's laptop, which the FBI had in their possession as early as 2019, and they did nothing with it.  Because the FBI doesn't give a fuck about actual justice, they're the DNC's goon squad.

I know, I know, I'm repeating myself.

Posted by Ragin' Dave at 16:37 No comments:
Email ThisBlogThis!Share to TwitterShare to FacebookShare to Pinterest
Labels: Biden is a puppet, Illegitimate and Corrupt

He fucks things up.

I wrote earlier about Justin Trudeau’s embarrassing display, singing Queen’s “Bohemian Rhapsody” in a hotel in London two days before the funeral during the official mourning period. It earned him a lot of scorn from the people in Britain.

But as bad as that was, it wasn’t at the funeral itself. It was Joe Biden himself who managed to seize that moment to embarrass the U.S. with Joe being typical Joe. As we’ve noted in the past, Biden has a bad habit of being late to everything, as our Andrew Malcolm has reported. Well, everything, except for his every weekend vacation. Those, he’s out the door as fast as he can go. But that habit can be rude, not to mention that it can cause dangerous problems with other nations and seriously hurt our interests.

But the one thing you really shouldn’t be late for is a funeral. It starts on time and they’re not waiting for you, particularly when it’s the Queen and every moment is highly choreographed. However, that didn’t stop Joe Biden. According to The Guardian, Biden was late to the funeral.

Biden's puppet masters made sure that the presidential limo was used, probably because they didn't want other world leaders to see the puppet masters changing Biden's diapers.  And hey, there's traffic in London, you know?  Especially during the QUEEN'S FUNERAL.

You had leaders of countries standing in line to board a bus.  But  Biden probably can't stand for that long without assistance.  Kings, queens, prime ministers, all waiting to get on a coach.  You know what I call that?  I call that a perfect opportunity to meet up with world leadership and have an off the books discussion, but then I'm not a pathetic, corrupt, senile Chinese hand puppet who can't be allowed outside without his handlers.

It's pathetic that America has such a feeble old puddingheaded, kid-sniffing, influence-peddling pervert installed as President.

Posted by Ragin' Dave at 07:02 No comments:
Email ThisBlogThis!Share to TwitterShare to FacebookShare to Pinterest
Labels: Biden is a puppet, The Death of America

Probably because American food is crap

And too many Americans don't know how to cook proper food.

I came upon this one tweet from an American guy who just traveled to Europe for a vacation. While he was there, he lost weight and felt great. The moment he came back home to the US, he got sick feeling. Why?

Most American food is crap, plain and simple.  Fucking soy is in EVERYTHING.  So is corn syrup, which your body can't really digest.  Sugar in multiple forms.  Everything is way too sweet.  Seed oils like Canola, Safflower, all those expeller pressed tubs of poison that we pour into everything.  Shortening, also known as cottonseed oil that's been hydrogenated.  That shit does straight into your arteries and stays there.

90% of fast food has all the horrible shit in it.  Fried foods using seed oils instead of beef tallow as God intended.  Processed to hell and gone until it doesn't resemble anything natural.

And then if we're not eating out, what do Americans do?  Grab boxes and bags of processed food and make that shit at home.  Have you looked at the ingredients in that crap?  You can't pronounce half of them without a degree in chemistry. 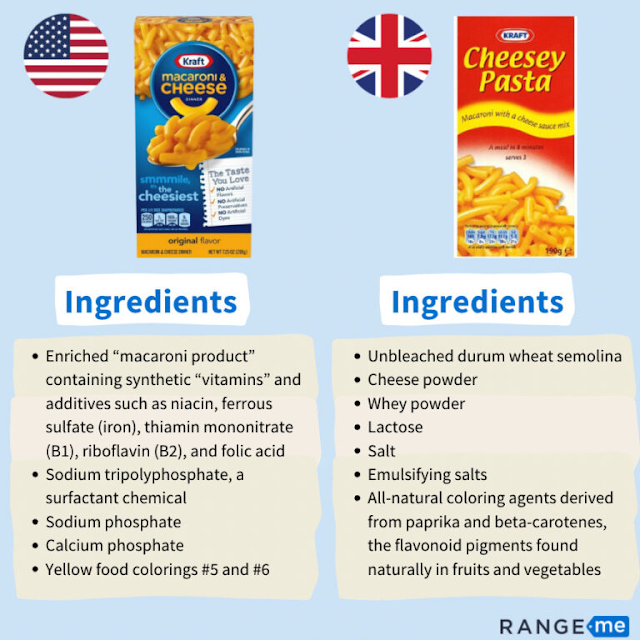 And the sad fact is that you can make much healthier food from scratch if you just spend five more minutes.  Even mac and cheese.  I love making that from scratch.  It's not difficult.

So yeah.  American food is crap, unless you're being VERY selective about what you get and you make it yourself. 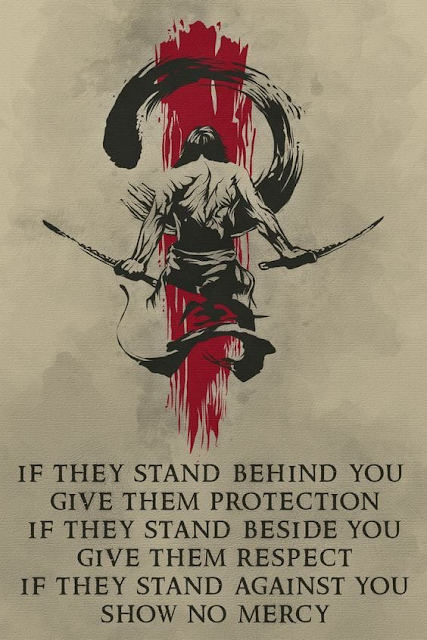 And now I can teach the Advanced Rider Course.  Add that with my other training and I might be able to make some halfway decent money when I retire.

Posted by Ragin' Dave at 14:20 No comments:
Email ThisBlogThis!Share to TwitterShare to FacebookShare to Pinterest
Labels: Personal crap

Sierra Hull live at Paste Studio on the Road: DelFest