Folks, this is called "cleaning the gene pool".

"I cannot believe I'm about to do what I'm gonna do," YouTuber Marc Pagan said before sinking his teeth into a Tide Pod. "I'm just bored, so I'm doing something right now that is completely stupid."

In your life, you WILL be an example.  You will either be an example of what to do, or what NOT to do, but you will be an example.  Every species has those individuals who are too dumb to continue living.  Normally they self-select themselves right out of the genetic lottery.  Let.  That.  Happen.
Posted by Ragin' Dave at 13:23 No comments:
Email ThisBlogThis!Share to TwitterShare to FacebookShare to Pinterest
Labels: wtf????

Liberalism is a mental disorder

This bundle of gobbledygook and nonsense is the perfect example.

Why are the pink pussyhats on the outs?
The reason: Apart from the vulgarity of it all, the colorful head apparel excludes transgender women and gender nonbinary individuals who lack female genitalia — as well as women of color since their genitals are more likely to be darker colors than pink, the Detroit Free Press reported.

“I personally won’t wear one because if it hurts even a few people’s feelings, then I don’t feel like it’s unifying,” Phoebe Hopps, founder and president of Women’s March Michigan and organizer of anniversary marches Jan. 21 in Lansing and Marquette, told the Free Press.

And trust me, all you precious butthurt snowflakes - all women are pink on the inside.  If you classify women by the color of their outer labia, you are mentally ill.
Posted by Ragin' Dave at 09:25 2 comments:
Email ThisBlogThis!Share to TwitterShare to FacebookShare to Pinterest
Labels: Dirty Fucking Hippy Losers, Nucking Futs

Haiti is a shithole. That is not the story.

Ask any of the US Soldiers who were sent there for hurricane relief.  It's a shithole.  That's just what it is.  The Dominican Republic, which is ON THE SAME ISLAND, is not a shithole.  It's not where I would want to live, but people go there on vacation all the time.  Don't drink the water, and be careful of the food, but the people are very nice.  A little crazy, but nice.

Africa, in general, is a shithole.  That continent will attempt to kill you in multiple different ways every single day.  Bugs.  Disease.  Animals.  Other people.  They all try to kill you in Africa.  Not only do I not want to live in Africa, I don't want to visit any more of Africa than I've already seen.  My life isn't going to go on forever, and if I'm going to visit some other country it's going to be one where I don't have to constantly watch my back.

Detroit is a shithole.  It's quite honestly the most depressing American city I have ever been in.  Boarded up houses, boarded up businesses, the place just LOOKS depressed from the moment you set foot on the sidewalk.  The military center I went to was dilapidated and depressing.  Trying to find recruits in Detroit is almost a lost cause.  It's a shithole.  Thanks, Democrats!

If Donald Trump named some countries as shitholes, he's only speaking the truth.  And the Democrat Media Complex is going full steam ahead in their hysterics, because that means they don't have to talk about how indictments are finally coming down in the Clinton Uranium scandal.  No, Clinton herself isn't indicted yet, but it's one more step in taking that felonious hag down.

An 11-count indictment was handed out on Friday connected to the alleged Russian bribery scheme involving former Secretary of State Hillary Clinton, the Obama administration, and Uranium One.

The charges are against Mark Lambert, who is the "former co-president of a Maryland-based transportation company that provides services for the transportation of nuclear materials to customers in the United States and abroad." Lambert 54, of Maryland, was charged with "one count of conspiracy to violate the Foreign Corrupt Practices Act (FCPA) and to commit wire fraud, seven counts of violating the FCPA, two counts of wire fraud and one count of international promotion money laundering," the DOJ said in a statement.


So now the hysterical wailing and gnashing of teeth about the word "shithole" kind of makes sense, doesn't it?
Posted by Ragin' Dave at 08:37 1 comment:
Email ThisBlogThis!Share to TwitterShare to FacebookShare to Pinterest
Labels: Clinton Shennanigans, The Media is not your friend, Total Corruption

So, Mississippi.  Rather a poor state, all things considered.  Lots of trailer parks around here, and I drive by several of them on my way home.

And many of those dilapidated trailers have shiny cars with 22-inch rims and custom paint jobs parked in front of them.

A car will never be as valuable as it is today.  Cars depreciate.  They are not investments.  They don't make you money, unless you're buying junkers and fixing them up.  But driving your pimp-mobile around while living in a trailer doesn't make you cool.  It makes you a moron.

I wonder where they would be living if they took the money they've wasted on pimping their ride and put it into a house somewhere.  I spent less on my car than they spent on all the shiny bullshit and crap they put on their cars.  But I'm living in a rather nice house, and they're living in a rusty tin can in a park on the side of the highway.

Oh, and by the way, 22-inch rims on any car makes you a moron.  You're destroying the most important aspects of your car's performance:  THE TIRES and their connection to the road.  Cars are designed to have a certain amount of rubber between the road and the suspension.  When you screw with that, you screw with your ride.  When you screw with your ride, you shorten the life of your suspension and make the ride that much worse.  Whenever I see 22 inch rims, I see a person who has absolutely no clue what the mechanics of driving actually are.
Posted by Ragin' Dave at 11:29 3 comments:
Email ThisBlogThis!Share to TwitterShare to FacebookShare to Pinterest
Labels: Musings and Meanderings

We now have over 320 million people in this country.

How many is enough?

Are our cities not crowded enough?

Is our welfare system not stressed enough?

Are our schools not failing enough?

How many more immigrants do we need?
— Mark Pantano (@TheMarkPantano) January 11, 2018


When I lived in Seattle, getting from Seattle to Tacoma to Olympia on I-5 was a chore.  Not horrible, but a chore.  Lots of traffic.

Last time I went to the Puget Sound area, I-5 was locked up tighter than the 101 in Los Angeles, and the 405 around Renton was just as bad if not worse.

Waaaaaaay back when I was a yoot, we would visit relatives in Seattle.  Back then, if you wanted to "get out of the city", you drove to Tucwila, which is just a little bit south of Seattle.  Now you can drive from Seattle to down past Tacoma and it's concrete buildings all the way.  The open areas are gone.  They've been built over and up in order to accommodate the large amount of people moving to that area.

So, how many immigrants are enough?  How many more people do we need to add to this country?  When is enough, enough?  Ask that to the next people screaming that we need to allow the Dreamers, a huge portion of whom cannot even speak English after being in this country for a decade or more, to stay and continue to suckle off the government teat while voting for Democrats.
Posted by Ragin' Dave at 06:58 1 comment:
Email ThisBlogThis!Share to TwitterShare to FacebookShare to Pinterest
Labels: Immigración

Went to Greenville a couple weeks back

to check out a brewing shop.  Drove by lots and lots of cotton fields.  All fallow right now of course, but here and there were clumps of cotton plants that hadn't been harvested, so you could tell what crop had been grown.


So this made me chuckle. 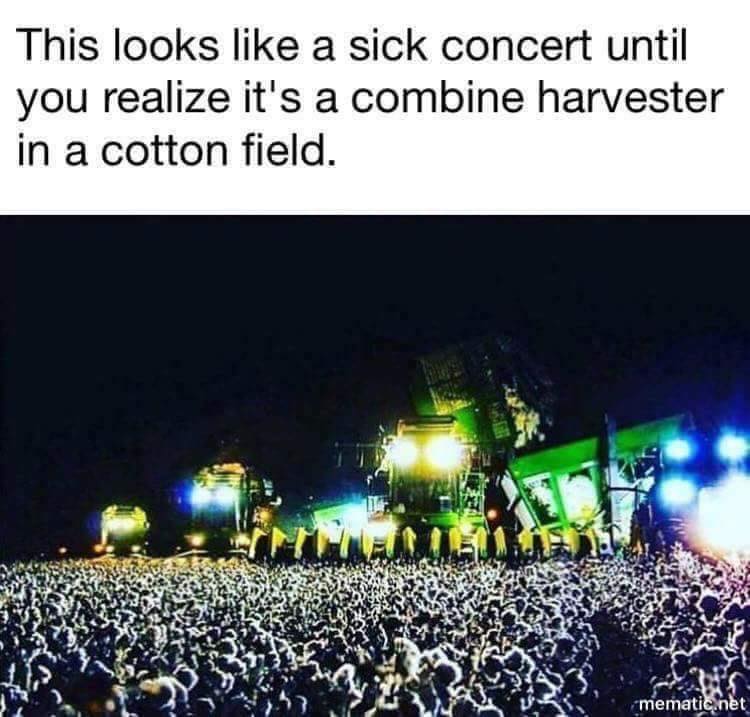 Posted by Ragin' Dave at 07:17 No comments:
Email ThisBlogThis!Share to TwitterShare to FacebookShare to Pinterest
Labels: Random Crap

As for me, I haven't watched a single game after the temper tantrum the NFL threw back in September.  And I won't be watching any more games, period.

Fuck the NFL.  I can't wait to see how much TV revenue drops off next year.   Let them enjoy the fruits of the tree they planted.
Posted by Ragin' Dave at 16:49 1 comment:
Email ThisBlogThis!Share to TwitterShare to FacebookShare to Pinterest
Labels: Fuck the Fucking Fuckers

But, but but... UNPOSSIBLE!

I am told by Progressives EVERY SINGLE DAY about how easy it is to buy a gun!

Federal agents posing as criminals were unable to purchase any firearms from legitimate online marketplaces despite dozens of attempts over a two-year period.

Between July 2015 and November 2017 investigators from the Government Accountability Office (GAO), following up on a congressional request, tried to make the illegal private gun purchases through a number of online forums and market places. They made 72 attempts over that time but couldn't complete a single sale using legitimate sites.


Then again, given that most Progressives have the brain function of a tape-worm, it doesn't shock me that they're wrong.
Posted by Ragin' Dave at 06:47 No comments:
Email ThisBlogThis!Share to TwitterShare to FacebookShare to Pinterest
Labels: 2A

Yes I question their patriotism. And their support for this country. UPDATE: It's a parody account.

I'm taking it down.  It's not a real account, it's just some jack-off looking to get a reaction.  I got suckered.
Posted by Ragin' Dave at 17:11 2 comments:
Email ThisBlogThis!Share to TwitterShare to FacebookShare to Pinterest
Labels: Die Screaming, Dumb as a fucking stump, Fuck the Fucking Fuckers, Military Life
Newer Posts Older Posts Home
Subscribe to: Posts (Atom)