Oh, they better pass this

Maybe if folks from South-eastern Idaho hadn't gotten a little taste of what Islamic boys do, this wouldn't be such an issue.  But they did, so it is.

The Idaho House on Tuesday approved North Idaho Rep. Eric Redman’s anti-Sharia law bill by a nearly two-to-one margin, the furthest Redman has gotten with his proposal in three years of trying.

Idaho Spokesman The bill, which passed on a 44-24 vote, would declare void any court ruling that relies “in whole or in part on any foreign law” that doesn’t match U.S. or Idaho protections for due process, freedom of religion, speech, press, privacy or marriage. It doesn’t specifically mention Islamic Sharia law, but that’s been the focus of debate over Redman’s proposal.


It's sad that we've gotten to a point where a bill like this is even needed.  But given the Left's desire to embrace enemies of Western Civilization at every opportunity, and make no mistake, Islam is the enemy of Western Civilization, then it behoves those of us who can see a danger coming to ensure we avoid it.
Posted by Ragin' Dave at 12:54 No comments:
Email ThisBlogThis!Share to TwitterShare to FacebookShare to Pinterest
Labels: Islam, Politics

CNN says they didn't give anyone questions for their Town Hall. They lied, as usual. 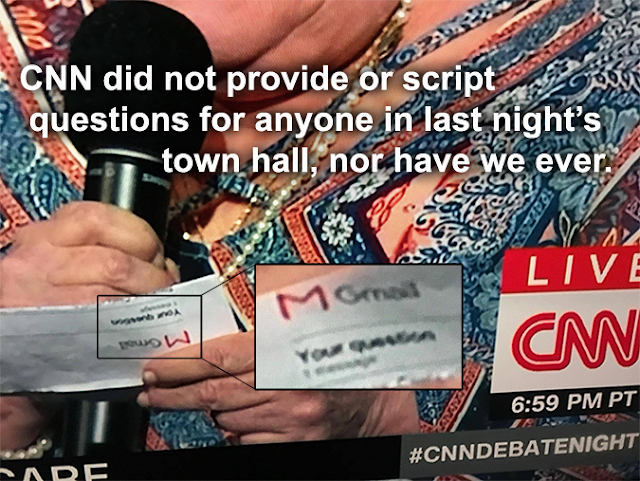 Found here.
Posted by Ragin' Dave at 09:21 No comments:
Email ThisBlogThis!Share to TwitterShare to FacebookShare to Pinterest
Labels: The Media is not your friend

So, regarding the school shooting in Parkland, Florida:

The FBI was tipped off about this kid twice, and did nothing.

Local law enforcement agencies had been called to this guy's house 39 times, and did nothing.

And now we're finding out that a Broward County Sheriff's Deputy was actually on site at the time of the shooting, and did nothing.

But they want to blame the NRA.

They want to blame an inanimate object.

I think we all know why.

Broward County Sheriff Scott Israel should resign immediately, not only for this screw up but for the fact that he KNEW his own deputies had fucked up and he went out on a CNN stage and pushed their bullshit narrative.  It's no wonder the Lefties tried a full court press for gun control the moment the bodies had stopped twitching.  Every day that passes comes more news about people who did not do what they were supposed to do, and these are the people the Left says should be in charge of situations just like this!

CNN pulled a two-minute hate on Dana Loesch for daring to say that private citizens are the only ones who can protect ourselves, and as it turns out, she is 100% correct.  Because the guy who was actually paid to protect those students in the case of an active shooter did NOTHING while kids were getting shot.
Posted by Ragin' Dave at 05:44 No comments:
Email ThisBlogThis!Share to TwitterShare to FacebookShare to Pinterest
Labels: 2A, Fuck the Fucking Fuckers

"I expected to be able to ask my questions and give my opinion on my questions," Haab said.

"Colton Haab, a member of the Junior ROTC who shielded classmates in the midst of terror says he did not get to share his experience," WPLG's Janine Stanwood explained.
"Colton wrote questions about school safety, suggested using veterans as armed school security guards but claims CNN wanted him to ask a scripted question instead so he decided not to go," Stanwood reported.


I watched a couple of clips of the town hall that CNN held.  I couldn't watch more than a few clips because I can't stand CNN's habit of dressing up emotional vomit as some sort of "logic".  The kids were smug and insulting at every turn.  The Broward County Sheriff who's department basically ignored every single warning flag the shooter put up was smarmy, condescending and full of himself.  And the NRA couldn't have asked for better TV ad material than all these smug, ignorant shitbags clapping and cheering over full confiscation of all semi-automatic firearms.

2018 is going to get nasty.  Prepare to fight back, hard.
Posted by Ragin' Dave at 07:15 No comments:
Email ThisBlogThis!Share to TwitterShare to FacebookShare to Pinterest
Labels: 2A, Politics

If you have boys at home, maybe they should read this

A Letter to the Boys and Young Men of America.
Posted by Ragin' Dave at 07:38 1 comment:
Email ThisBlogThis!Share to TwitterShare to FacebookShare to Pinterest
Labels: Linky Love, Must Read

This does not shock me one bit.  Leftists always use the state to bully, intimidate and punish their enemies.

It was a prolonged mystery that struck Wisconsin education reformers as more akin to a Kafka novel than American due process: Who was behind cryptic demand letters sent under the aegis of the Obama Justice Department, intimating without specific evidence that Milwaukee’s school-choice program was illegally discriminating against disabled kids?

Now, after a six-year bureaucratic and legal tangle in which school voucher advocates said they were stonewalled by Washington, the mystery has been solved. And the answer, they say, is alarming: The federal operation was sparked and practically run behind the scenes by liberal opponents of the program.


This is why Leftists need to be driven out of power.  Because all leftists are tyrants at heart, and they'll use the government as a weapon every chance they get.
Posted by Ragin' Dave at 07:01 No comments:
Email ThisBlogThis!Share to TwitterShare to FacebookShare to Pinterest
Labels: Government Thugs

Marines lower requirements in order to get more female officers to pass.

I can't think of anything that will is destroy combat readiness than lowering standards in order to appease diversity requirements.

I'm thankful that I'm getting close to retirement.  The Army is already infected with PC Diversity Bullshit from top to bottom.  It's sad to see the Marines fall as well.
Posted by Ragin' Dave at 17:39 No comments:
Email ThisBlogThis!Share to TwitterShare to FacebookShare to Pinterest
Labels: Military Life, Nucking Futs

Since I have the day off.

Yes, I busted up laughing.

And yes, I busted up laughing!

And they don't say "Domino".  They slap the domino on the table hard enough to leave a dent and holler it at the top of their lungs.  "DOMINO, BITCH!"

Unless you do it first.  Just sayin'.
Posted by Ragin' Dave at 01:30 No comments:
Email ThisBlogThis!Share to TwitterShare to FacebookShare to Pinterest
Labels: Personal crap

The underlying argument from our rulers is that Africa is a mess, because of racism. The book Why Nations Fail is the model for this argument. Whites destroyed the native African institutions and left behind extractive ones. That’s why Africa is a mess. The reality is sub-Saharan Africans have an average IQ in the low-80’s. Eritrea is the “smartest” country with an average IQ of 85. What that means is most Africans are borderline to mildly retarded. The reason Africa is not and never will be Wakanda is it is full of Africans.

Now, you cannot fault blacks for celebrating this fictionalized black homeland where they are at the top of the heap. The promotion of this fantasy, however, makes the essential point of the Dissident Right. Humans naturally want to reign supreme in their own domains, surrounded by people that are like them. Wakanda would not resonate with black people if the ruler was a guy named Muary Greenblatt and his minions were all East Asians or Mexicans. Like everyone, blacks dream of a world without diversity.

The over the top promotion of this black supremacist movie makes all the main cultural arguments you hear on the Dissident Right. If it is OK for blacks to dream of their own homeland, why can’t whites do the same? If blacks would be better off without whites around, doesn’t the same hold true for whites? If the natural order is for the races to be separate, then why in the hell is diversity a good thing? If you were hoping whites would become racially aware, the movie Black Panther is manna from heaven,

By separating people into groups, the Left has essentially created what it said existed all along:  A group that identifies itself as "White".  If blacks are going to vote against Whitey, and hispanics are going to vote against Whitey, all because of the color of Whitey's skin, then Whitey is going to find himself voting against blacks and hispanics just to be able to exist.  It's like like the political version of the Tragedy of the Commons.

So what does the future hold? Well, the fantasists will say “race war.” That’s bullshit, of course. No, the most likely future is a “whimper rather than a bang” scenario. And to make my point, I’ll once again invoke Native Americans. Right now, about a quarter of all American Indians live in squalor and dependency on reservations. The rest are spread out across the country, making a living, contributing to society. Individual Native Americans are fine, but “the community” is shit. I think that’s what we’re going to see happen with blacks. As the black community continues to decay, and as it continues to get squeezed by whites, Asians, and the stupefyingly fertile Hispanics, we’ll see a kind of urban “reservation” network take shape. Blacks with skills and a desire to be seen as something other than fart receptacles will leave the community and mix with everyone else. The remaining detritus? They’ll be increasingly boxed into urban hellholes. Reservations, essentially. Places with lots of welfare, lots of crime, and little hope. Places that cannot be helped, places that cannot be saved.

The notion that a segment of the black community might be unsalvageable is heresy to egalitarian leftists, conservative Christians (who hold fast to ideas of redemption and salvation), and establishment neocons (because “land of opportunity, early to bed, hugs not drugs, we all bleed red”). But as millions of black Americans go to the movies this week to escape reality, the rest of us might do well to contemplate the reality they’re escaping.

Even in the small town I live in, there are parts of said town that a person of light-colored skin does not trespass.  Folks have essentially self-segregated themselves into enclaves.  I've seen exactly what David Cole describes; individual blacks are working, living, etc, but the black community is going to absolute shit.  I had to stop by the police department last month on a business matter, and every single photo of wanted criminals that was hanging up in the PD were black faces.  When you hear about gunshot victims, you don't hear about John Smith getting capped, it's Devonta'e, or Drayzell, or some other various ebonics spelling of some name that didn't exist until the 1980s or so.  But the guy who delivers propane around our neighborhood, who just happens to be black?  Justin.  I don't think he's going to be involved in a gang shooting any time soon.

No, I don't have any answers.  I'm just observing and stating what the Left doesn't want anyone to observe or say.
Posted by Ragin' Dave at 07:26 No comments:
Email ThisBlogThis!Share to TwitterShare to FacebookShare to Pinterest
Newer Posts Older Posts Home
Subscribe to: Posts (Atom)