Go over to Headmissy's place and take a gander.
Posted by Ragin' Dave at 10:45 No comments:
Email ThisBlogThis!Share to TwitterShare to FacebookShare to Pinterest
Labels: Linky Love

Adding to this argument

As to why David Gregory needed to be prosecuted under D.C.'s gun laws.

Why is the law important? If Gregory clearly violated the law, but there is no interest to be served in prosecuting him, doesn't that prove that the law is not important? If the precise thing that he did — which is clearly what is defined as a crime — raises no interest in prosecution, how can we be satisfied by letting this one nice famous man go? Rewrite the law so that it only covers the activity that the government believes deserves prosecution, so there is equal justice under the law.


Let me add my two cents to that - If the law is so unimportant that the D.C. police can't be bothered to enforce it when one of the political favorites violates it, then I have no interest in following ANY of the laws of D.C., because they've just proven that rather than being based in objective reality and moral certainty, the laws of D.C. are subjective, capricious and based on political favoritism.  And since their laws are subjective, capricious and based on political favoritism, I do not have the obligation to follow them that I would have with objective laws based on moral certainty.

Now, add in the fact that the Attorney General refusing to prosecute the politically favored David Gregory is a friend of David Gregory and his wife....

Nobody has an obligation to follow rules written by and for the new monarchy of D.C.
Posted by Ragin' Dave at 10:38 1 comment:
Email ThisBlogThis!Share to TwitterShare to FacebookShare to Pinterest
Labels: Fuck the Fucking Fuckers, Hypocrisy thy name is Democrat, Moonbats on Parade, Progressive Fascism

More things what make me laugh

Heard on the news today:  "Bitterly cold temperatures in California......"

Baby, you don't know what cold is.  This entire state doesn't know what cold is.  I just came from WISCONSIN.  THAT state knows what "COLD" is!  I'm talking snot-freezing, dick-shrinking, cold enough to make 33 degrees feel like tropical heat COLD.  Nipples hard enough to cut glass kind of cold!  Turn your diesel fuel into gel cold!  Your car engine won't crank because it's frozen solid cold!

We all remember that, don't we?  Yeah, you know we do, when that fucking communist cunt from California opened her stretched out piehole and bleated one of the most idiotic things she's ever said, and that's saying something.

It seems that in their haste to cram socialized medicine down the throats of the American people, then-Speaker Nancy Pelosi (D-CA) and Barack Obama overlooked Senate amendment 3276, Sec. 2716, part c.

According to reports, that amendment says the government cannot use doctors to collect "any information relating to the lawful ownership or possession of a firearm or ammunition."
CNN is calling it "a gift to the nation's powerful gun lobby."

And according to Senate Majority Leader Harry Reid (D-NV), that's exactly right. He says he added the provision in order to keep the NRA from getting involved in the legislative fight over Obamacare, which was so ubiquitous in 2010.


Fuck you, Nancy Pelosi, you god-damned fascist bitch.  Fuck you Obama, you jack-booted nazi bastard.  And fuck anyone else who has helped us slide down to this point, where the thought of the PRESIDENT willfully violating the Constitution is not just a fear, but a reality.

I just think that using the freedom-destroying Obamacare bill as the method to throw their gun control back into their faces is some delicious irony.
Posted by Ragin' Dave at 08:46 3 comments:
Email ThisBlogThis!Share to TwitterShare to FacebookShare to Pinterest
Labels: 2A, Fuck the Fucking Fuckers, Obama the Nazi, Pelosi, The Death of America

He isn’t playing a game; he’s fighting a war, and it better dawn on the GOP that Obama doesn’t want to just shift the needle a bit. He wants us defeated, disarmed and docile so he can turn us into the progressive, extra-Constitutional Utopia his faculty-lounge buddies have been fantasizing about for the last century.

Obama and his minions are serious about defeating us, so we need to be serious about defeating them. Let’s banish cheesy talk about “Working together for the good of the country.” The only thing that is good for this country right now is defeating Obama’s leftist agenda, fully, completely and in detail. You can’t work with him, you can’t compromise with him, you can’t convince him. He’s a progressive Terminator and the Constitution is Sarah Connor.

You have to beat him, and that means counterattacking to seize the initiative by getting on the scoreboard with some wins and restoring our team’s morale.


But that's IF our GOP "representatives" have the balls.
Posted by Ragin' Dave at 20:55 No comments:
Email ThisBlogThis!Share to TwitterShare to FacebookShare to Pinterest
Labels: Politics

Light on the free ice cream for a while.
Posted by Ragin' Dave at 20:48 No comments:
Email ThisBlogThis!Share to TwitterShare to FacebookShare to Pinterest
Labels: Personal crap

Physically, I hurt.  Crap I would have bounced back from ten years ago now takes me a while.

That is all.
Posted by Ragin' Dave at 07:29 No comments:
Email ThisBlogThis!Share to TwitterShare to FacebookShare to Pinterest 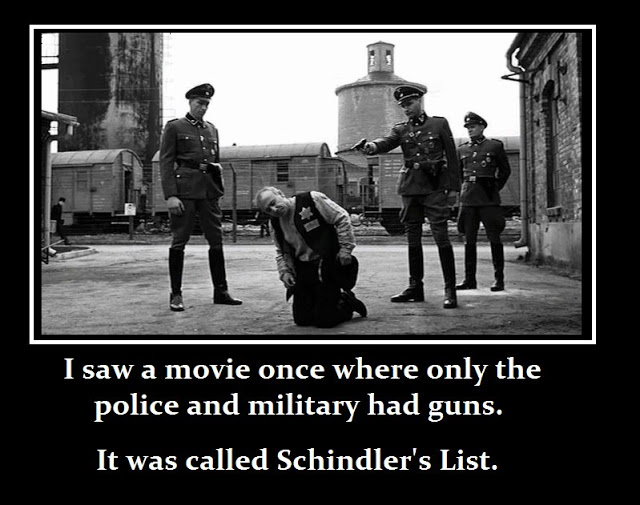 !!!!!
Posted by Ragin' Dave at 07:00 1 comment:
Email ThisBlogThis!Share to TwitterShare to FacebookShare to Pinterest
Labels: The Death of America

On the sheer amount of fuckwittery going on at the Federal level, but there's just too damn much.

Chuck Hagel?  WTF?  He has extreme negatives and positives.

Stupid fucking morons finally waking up too late?  Just...  fuck you, you worthless, kool-aide guzzling douche tools.  Go outside and play hide and go fuck yourself, m'kay?  Maybe if you weren't such a bunch of slack-jawed, half-wit, drooling-on-yourself retards you wouldn't have voted for the guy who wants to spend your future for his Marxist pipedreams.

All the gun-control tyrants of the National Socialist Democrat Worker's Party coming out of the woodwork?  Come for my guns, you'll get my bullets first.  One at a time, in high velocity.  Go fuck yourself, you jack-booted facists.

Hobby Lobby being forced to choose between it's religion and it's business?  Is there any more clear example of why the facist Obama regime is the death of America?  More importantly, the fact that the facist Obama regime was re-elected is the evidence of the death of America.  I expect Christians to be forced to wear yellow crosses soon enough.  And plenty of the gutless sheep would do it, too.

My mom, my dear sweet mother, one of the most rational people I know, is making plans on what to do when the government slides farther down it's facist death spiral.  Yeah.  Isn't that fun?

Screw this, I'm having a cigar and a scotch.
Posted by Ragin' Dave at 19:12 No comments:
Email ThisBlogThis!Share to TwitterShare to FacebookShare to Pinterest
Labels: Fuck the Fucking Fuckers, Obama the Nazi, The Death of America

That is all.
Posted by Ragin' Dave at 13:39 No comments:
Email ThisBlogThis!Share to TwitterShare to FacebookShare to Pinterest
Labels: Personal crap
Newer Posts Older Posts Home
Subscribe to: Posts (Atom)