The range trip went well, and my co-worker (who never fired a gun before in her life) was able to learn enough to pepper the bullseye by the end of the day. Pretty damn good. Her son took to my rifle like a fish to water and burned through about 300 rounds on his own. All in all, it was a damn good day.

While at the range, I met Molbot for the first time, and Analog Kid, Molbot and myself were able to test one of the largest handguns in production. 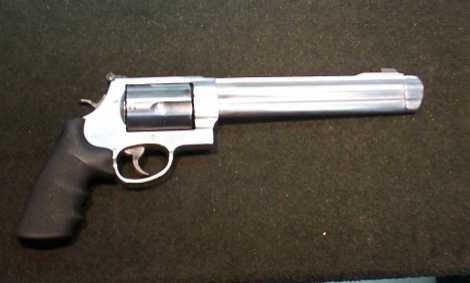 It fires a 350 grain bullet at 1900 feet per second. To give you an idea of what that's like, my 38 Special fires a 150 grain bullet at around 950 feet per second. This is a revolver that you hunt bear with, my friends. Anything you hit not only goes down for the count, but if it's human sized or smaller, most likely flies apart in many small pieces. Let see if I can give you another example. Here are all the types of rounds we fired on Saturday.

Uf da! That's a round half an inch in diameter! Needless to say, I was drooling at the chance to fire it. Everybody took turns. We all agreed that it was a blast to shoot (no pun intended). If I had a spare $900 I would SERIOUSLY consider picking one of these bad boys up. But alas, my budget laughs at me. Still, I have my memories.

Yes, that's really me. Unf! While I doubt that I'm going to pick one of these beasts up any time soon, I do hope to get a .22 pistol. Anyone from the Seattle area who wants to learn how to shoot, let me know. Both Analog Kid and I are more than willing to teach new people.

I'll see you all tomorrow.
Posted by Ragin' Dave at 19:53
Email ThisBlogThis!Share to TwitterShare to FacebookShare to Pinterest