OK, so last Monday I told y'all that the Ragin' Mrs. and I were going to be tourists for a day. We went to a few places in Old San Juan that we hadn't been to before. On the way back to the vehicle, we stopped at a place who's name translates to "Park of the Pigeons". 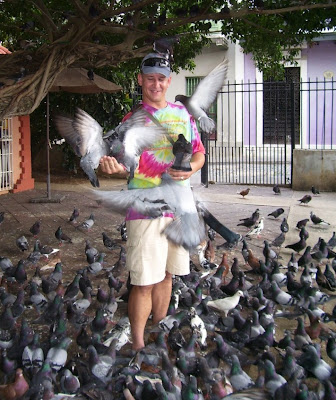 Yes, that's a pigeon on my head, and pigeons eating out of my hands. OK, so they're technically "Rock Doves", also known as "squab" for those culinary folks, but it was cool all the same.

I've got tons more pictures, but I'm not going to bore you right now. Plus, most of the pictures I've taken were on film and they're not developed yet. The Ragin' Mrs. snapped this shot.
Posted by Ragin' Dave at 16:11
Email ThisBlogThis!Share to TwitterShare to FacebookShare to Pinterest
Labels: Personal crap