Yeah, I said what I said.  She's a worthless piece of shit who's only skill in life is playing sportsball for empty venues while badmouthing the country that makes her lifestyle possible.  And now the USA is trading an international arms dealer to get her out of Russian jail.

All while a retired Marine rots in Russian jail on bogus espionage charges.  But the USA is going to let him rot there, while they bring back the anti-American ape.

Bring the Marine back.  Bringing back the ape lowers the collective IQ of the USA once she crosses the border, and quite frankly I don't see why she should be rescued by a country she hates.  Let her rot in jail.  Bring back the Marine who actually served his country honorably.

But of course the Biden puppet masters would never bring back anyone who actually loves this country.  They only want the anti-American shitbags.  You know, just like themselves. 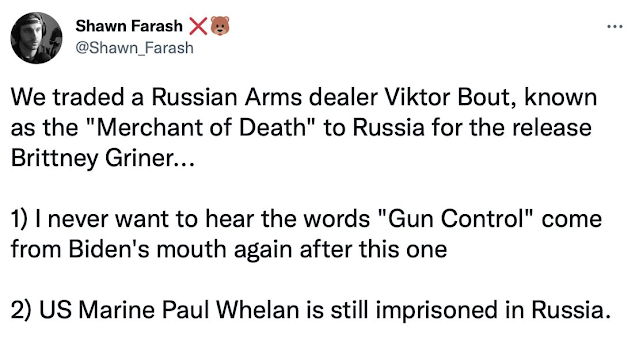 Posted by Ragin' Dave at 07:01
Email ThisBlogThis!Share to TwitterShare to FacebookShare to Pinterest
Labels: Fuck the Fucking Fuckers, Nucking Futs

THAT THING is a dood playing wimmens baskey-ball!

The only way to convince me otherwise is to drop its drawers and show me the junk.

At least the WNBA was involved with a trade that made the news.

Drum - I almost spit out my whiskey when I read that.