"Hey Dave, why so serious yesterday?"

Because I felt like it, that's why. But today seems to need something lighter. So, as I mentioned a while back, I recently found out about the Hash House Harriers. I went on my first Hash last Saturday. Much running was ran, much beer was drank, and I sweat like a whore in church. It was approximately a six mile trail, on both roadways, sidewalks, cow pastures, ungodly "kinda-sorta trail" like thingys, and various other paths that could laughingly be called a "trail". Here's me, crossing a small stream: 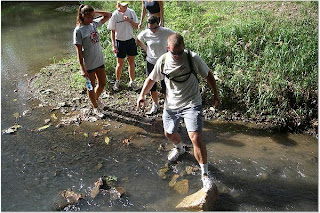 I bled a little bit, although not as much as the guy who found a barbed-wire fence with his shins. I was unlucky enough to find some rusty barbed wire with my feet, causing it to whip up and nail me in the back of the knee. Thank god my Tetanus shots are up to date. Still, the beer afterwards helped dull any pain I might have felt at that point. My normal running routes are 3.5 to 4 miles long. By the time I got to mile five on this trail, my legs were pretty much numb. But still, all in all it was a good time, and I'll be going back in two weeks to do it all again.

Oh, and did I mention the beer? I did? Good. There was lots of it.
Posted by Ragin' Dave at 06:41
Email ThisBlogThis!Share to TwitterShare to FacebookShare to Pinterest