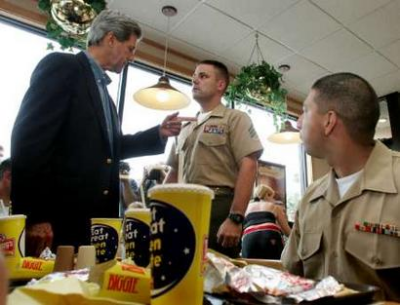 That isn't what he's saying to those Marines, but it's funny. Kerry pointing to medals on a soldiers chest when he threw "his" away. Depending on when you ask Flipper, they either were or weren't his medals. At the time they were, now they aren't. I wonder how many veterans have more pride in their medals than John "I don't fall down, that son of a bitch knocked me down." Kerry.

Anyway, that isn't what's going in the pic. Kerry thought he'd interupt the meal of a few unimpressed Marines.

"He imposed on us and I disagree with him coming over here shaking our hands," one of them told reporters afterwards. "I'm 100 percent against" Kerry, he said. "We support our commander-in-chief 100 percent."

Hat tip to Jettison at Blogs For Bush for the find and Duane at The Forest For The Trees for the title suggestion.
Posted by The Valiant Elephant at 10:54
Email ThisBlogThis!Share to TwitterShare to FacebookShare to Pinterest