Warning! Tissue Alert! Not for the emotionally weak! 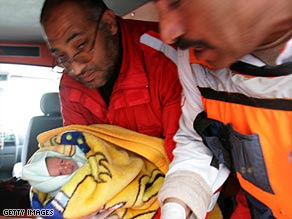 No word on how many were involved in FIRING ROCKETS INTO ISRAEL FOR WEEKS NOW.
The caption for the photo?

Emergency workers carry a wounded baby after an Israeli operation near Jebaliya on Saturday.

That's right! I said a WOUNDED BABY! Did you get the WOUNDED BABY part? Good, because I'd hate to think that you went through the rest of today completely ignorant of the fate of all the BABIES THAT THE ISRAELIS ARE TRYING TO KILL!!

The sources said 85 people, including civilians and children, have been
killed in the Jebaliyah area since the incursion began Wednesday

Ahhh, yes. The Sources. Sounds like something out of an episode of "Lost." You caught the part about civilians and children being killed, right? RIGHT!? Could that be because the Paleswinians have a bad habit of firing their rocket launchers from schoolyards and peoples' front lawns? Or perhaps when a 15 year old "militant" is one of the people loading the launchers, you get to call him a "child" for propaganda purposes?

Heyyyy...waaaait a minute! Isn't that that Green Helmet guy (again!)? 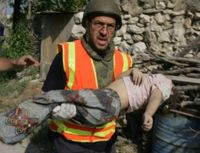 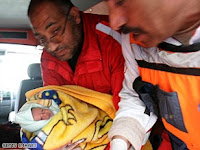 Posted by Steve B at 16:35
Email ThisBlogThis!Share to TwitterShare to FacebookShare to Pinterest