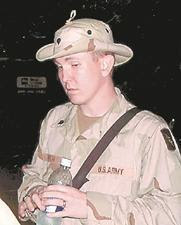 “Shane was an expert in dealing with wounds that come when that happens,” said Maj. Gen. Harold Cross, adjutant general for the Mississippi National Guard. “Though he was injured himself, another soldier lay wounded next to him. Shane directed a group of primarily engineers on what to do to stop that soldier’s bleeding enough to where he could be stabilized.”

Cross said the other soldier, Sgt. Ellis Martin, needed 52 units of blood while en route from Iraq to a hospital in Germany. Cross said Martin has undergone four surgeries at Walter Reed Army Medical Center in Washington, D.C., and is now in critical condition.

UPDATE: you can leave messages for families of the fallen here: Fallen Heroes Memorial
Posted by Tim at 13:53
Email ThisBlogThis!Share to TwitterShare to FacebookShare to Pinterest

i remember when shane started working at united blood service he always had big smile and made the room light up when he walked in he cared about every one and everything he came to work a little late one morning i asked him what made him late for work he said on the way to work he saw a horse in a field trying to have a colt she was have some problems having it so he helped deliver the colt he was a wonderful person i think of him so much he was like a son to me i gave him a nick name i called him punkin .after he got married i was joking with him one day i asked him if he wanted me to stop calling him pukin he said no nanny i will always be your punkin. i miss you punkin love nanny